If elected US president, Biden must balance domestic and international pressures to set a 2030 emissions target on a tight deadline, with a view to inspiring others 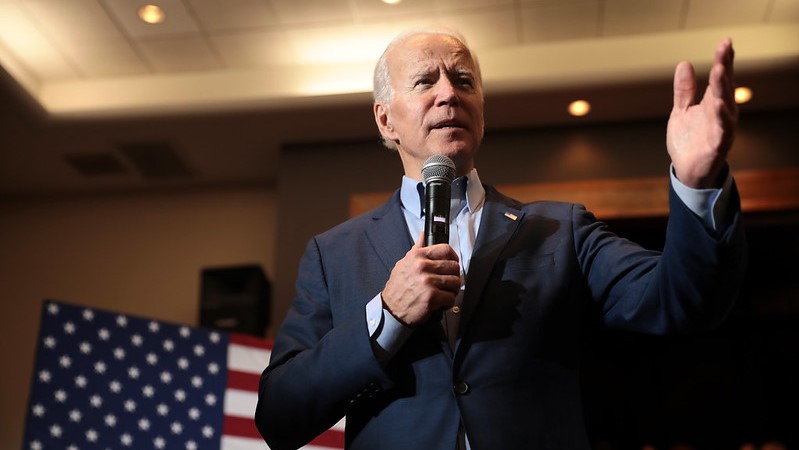 The US presidential election on 3 November is a critical moment for global climate action.

Joe Biden has promised to “lead a major diplomatic push” to raise countries’ climate ambition and put the US “back in the driver’s seat”. His opponent, Donald Trump, has repeatedly dismissed climate science.

With Biden consistently leading in national polls and Trump suffering from Covid-19, attention is turning to how that diplomatic push could look. At time of publication, analysis site FiveThirtyEight gave an 86% chance of a Biden victory.

If he wins the election, the Democratic candidate will still face a steep climb to present a credible climate strategy to the rest of the world.

Biden has committed to rejoin the Paris Agreement – which the US will formally leave on 4 November – on his first day in office and to “fully integrate climate change” into US foreign and national security strategies.

A Biden victory would trigger “huge pressure from the international community” for the US to step into a leading climate role, Nat Keohane, senior vice president at the Environmental Defense Fund (EDF), told Climate Home.

The timeline for action is tight, as governments are expected to update or enhance their climate goals ahead of the Cop26 climate summit in Glasgow, in November 2021 – only a year after American voters go to the polls.

Bangladesh urges countries to ramp up climate ambition by 2020 deadline

Biden is “going to have to be moving right out of the box with a whole range of national actions,” Todd Stern, senior Fellow at the Brookings Institution and former special envoy for climate change at the State Department under Obama, told a Chatham House conference earlier this month.

“The US is going to have to walk the walk and not just talk the talk,” he said. Re-joining the Paris Agreement is the easy bit.

From cutting emissions to net zero no later than 2050 to 100% clean electricity by 2035, Biden is running on the most ambitious climate platform presented by a presidential candidate.

But to convince other nations that after four years of retreat from climate diplomacy the US is back at the table, it will need to adopt an emissions reduction target for 2030 – a requirement for all countries under the Paris accord.

On this, Biden has been silent.

While no number has yet emerged from the Biden camp, climate analysts argue the US could increase emissions cuts to 45-50% by 2030 with robust federal policies in place.

Climate Action Tracker estimates to do its fair share to limit global heating below 2C, the minimum goal of the Paris Agreement, the US should reduce its emissions by at least 52% by 2030 through domestic action. That would go alongside increased climate finance to the developing world.

Where are US emissions after four years of President Trump?

Andrew Light, a former senior climate official in Obama’s State Department, said it was “deliberate and defensible” for the Biden team not to announce a 2030 target – or nationally determined contribution (NDC) – during the campaign. It leaves space for consultation if Biden is elected.

“In the Obama administration we got a lot of flak that the process for creating an NDC was done without a lot of consultative input,” he told Climate Home. “It could have been more transparent and the Biden team will be sensitive to that. I expect a much broader conversation to ensure more buy-in.”

But there is also a sense of urgency for the US to announce its 2030 climate plan to leverage increased commitment from other large emitters including China and India ahead of Cop26.

It will take a careful balancing act between domestic imperatives and global expectations to get it right, said Claire Healy, Washington-based director of think tank E3G’s climate diplomacy programme.

Analysts agree a Biden administration would be unlikely to announce a 2030 climate global before the third quarter of 2021. Waiting any longer risks undermining the US capacity to convince other nations to bring more ambitious climate plans to Cop26.

If Biden is elected, “there will be a sprint between the election results and inauguration” on 20 January to make progress on the issue, said Jake Schmidt, senior director at the US-based National Resources Defense Council (NRDC) Action Fund.

For Keohane, of EDF, this could make the 2030 climate goal a key driver of the administration’s policy agenda in its first few weeks.

“To get to the ambition level that the US is going to have to put on the table, it’s going to become very clear very quickly that a whole-government approach orchestrated by the White House will be needed,” he said.

Observers will be watching how the Biden camp organises itself in the White House to elevate climate action to the top of government.

A National Climate Council inside the White House led by a “climate czar”, an idea pushed by former Obama-administration officials Stern and John Podesta, is reportedly under consideration.

John Kerry, former secretary of state who has been advising Biden on climate issues, is among those tipped to lead the council and coordinate climate action both at home and on the world stage.

This could include delivering on a Biden promise to convene a summit of the world’s major emitters to persuade them to strengthen their climate pledges in his first 100 days in office – an important milestone for the administration to set out its priorities.

But the timing is awkward, with the US unlikely to be ready with its own target by mid-April. And leaders have already been invited to submit tougher plans at an event marking the fifth anniversary of the Paris Agreement a few months earlier on 12 December.

“A summit to leverage ambition only works if you have an NDC in hand, or at least a top line number,” said Light, suggesting the US could convene a leaders’ summit beyond the 100-day mark.

For Healy, of E3G, the summit could focus on greening the recovery to Covid-19 and help underpin major emitters’ climate plans.

To this end, Stern has called on Biden to revive something akin to the Major Economies Forum on energy and climate change. Launched by the Obama administration, the forum gathered 17 major economies and aimed to generate high-level leadership and collaboration on climate action.

If elected, Biden would have to “revive key diplomatic relationships around the world starting with the EU… and China,” he said.

President Xi Jinping’s announcement that China will peak its emissions before 2030 and aim for carbon neutrality by 2060 scored political points against the Trump administration.

It also left wiggle room for potential negotiations on raising ambition with a Biden administration, said Fang Zhang, of the Center for International Environment and Resource Policy at the Fletcher School, Tufts University, Massachusetts.

Citing her own research, she told CHN China could probably peak its emissions in 2026 based on existing policies. “Not giving a specific date for peaking leaves space and time [to do more],” she said.

Climate change could be a key point of collaboration between the world’s two largest emitters amid a complicated and deteriorating relationship on issues such as trade, human rights and military influence, analysts say.

But renewed cooperation on climate change will look very different from the Obama-Xi deal that underpinned the signing of the Paris Agreement.

Biden has promised to hold Beijing “accountable” for outsourcing pollution in its massive foreign investment drive known as the belt and road initiative (BRI). He committed to work with allies such as the EU to offer “alternative sources of development financing for lower-carbon energy investments” in BRI countries.

And Biden’s global climate strategy won’t be defined by its relations with China alone. “If you have climate change as a top foreign strategy it means the machine needs to be working on multiple gears at the same time,” said Schmidt.

In India, a Biden administration should “show that climate action is good for economic development and work to accelerate investments in solar energy,” said Nigel Purvis, a former US climate negotiator and CEO of Climate Advisers.

In Australia and Japan, Biden could leverage economic and security relations to confront Canberra and Tokyo’s support for fossil fuels exports and financing overseas – a strategy already suggested by one Biden advisor.

And in Brazil and Indonesia, Biden has suggested he will take a strong stance on tackling deforestation. He pledged to mobilise $20bn from public and private funds to protect the Amazon – a move slammed by President Jair Bolsonaro as “disastrous and unnecessary”.

If he wins, “there won’t be answers to all these questions before or on January 20,” Purvis said. “The message for the inauguration will be America is coming back. The specifics and policy details will take time to develop.”