US will leave climate deal one day after 2020 presidential election, although a Democrat winner could reenter almost immediately 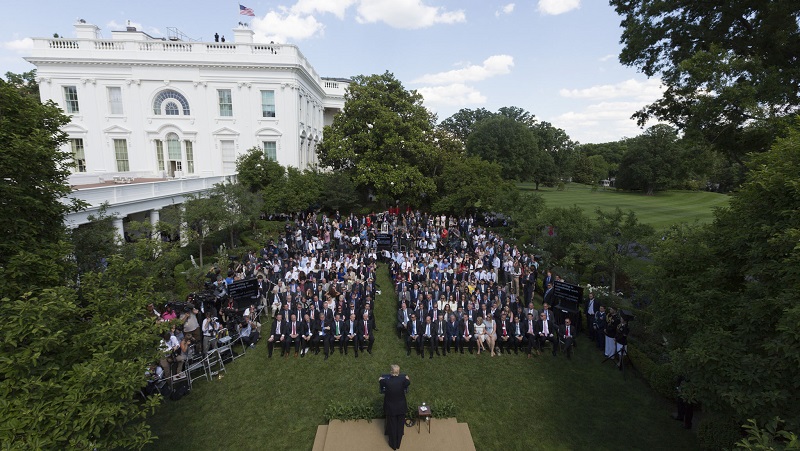 President Donald Trump announced his intention to pull the US out of the Paris Agreement in a speech at the White House in June 2017. (Photo: Joyce N. Boghosian/White House/Flickr)

Donald Trump has formally started the process of pulling the US out of the landmark Paris Agreement, three years after the deal came into force.

Announcing the withdrawal on Monday, secretary of state Mike Pompeo reiterated the administration’s view that the deal entered into by Barack Obama gave an advantage to developing countries, in particular China.

“President Trump made the decision to withdraw from the Paris Agreement because of the unfair economic burden imposed on American workers, businesses, and taxpayers by US pledges made under the agreement,” said Pompeo.

The move further isolates the US administration as the only national government in the world that officially turned its back on global efforts to cut greenhouse gas emissions and limit global temperature rise “well below” 2C.

Four years ago, the US played a critical role in brokering the deal it is now exiting by bringing China on side.

Andrew Steer, president and CEO of the World Resources Institute, said the move was “cruel to future generations, leaving the world less safe and productive”.

He also countered the idea that the Paris deal was unfair to American workers. “It also fails people in the United States, who will lose out on clean energy jobs, as other nations grab the competitive and technological advantages that the low-carbon future offers.”

Trump first announced his intention to withdraw the US from the Paris deal in June 2017, but Monday – three years after the deal entered into force – was the earliest opportunity for the administration to legally notify of its withdrawal.

Executive secretary of UN Climate Change Patricia Espinosa marked that anniversary by tweeting a video of diplomats and negotiators celebrating the signing of the Paris Agreement in 2015.

But even outside the agreement, the US will continue to take part in the climate talks.

The withdrawal procedures will take a year to complete meaning the US will officially leave the Paris deal on the 4 November 2020, one day after the US election on 3 November.

The move is likely to further polarise the climate issue in next year’s US election with every leading Democratic candidates pledging to immediately re-join the agreement if elected – a process that could take as a little as 30 days.

Top Democrats responded by affirming their support for the deal. Former vice-president Joe Biden called Trump’s decision “shameful”. South Bend mayor Pete Buttigieg said there was an “opportunity”, post-2020, to use the reentry of the Paris Agreement to “restore American credibility” on the world stage.

Polls also suggest a large majority of Americans support the US remaining in the Paris deal.

A 2018 survey by the Yale Programme on Climate Change Communication found that 77% of Americans believed the US should remain in the Paris Agreement, including 60% of Republicans. Among registered voters, 66% said they opposed Trump’s decision to pull out of the Paris deal.

The federal government’s regression on climate change has sparked a bottom up race to fulfil at least part of the US’ promises to cut emissions. A coalition of progressive local governments, states and businesses claim their collective efforts will bring the US two-thirds of the way to meeting its 2025 pledge to the Paris deal.

The timetable for withdrawal means the US will continue to be a legal party to the Paris Agreement during the climate talks hosted in Madrid next month, after Chile had to cancel the meeting due to social unrest. This will give the US administration a final say on how the Paris Agreement should be implemented.

The talks are due to finalise the rulebook of the Paris accord and resolve contentious issues over how carbon credits can be traded between countries – technical discussions which are key to ensure carbon markets encourage additional emissions cut.

Once formally out of the agreement next year, the US will still be able to attend climate talks and sit in Paris-related discussions as an observer without the ability to make-decisions or block consensus but with the soft power to continue to shape global climate diplomacy.

Pompeo said: “In international climate discussions, we will continue to offer a realistic and pragmatic model – backed by a record of real world results – showing innovation and open markets lead to greater prosperity, fewer emissions, and more secure sources of energy.  We will continue to work with our global partners to enhance resilience to the impacts of climate change and prepare for and respond to natural disasters.”

The 2020 climate talks in Glasgow, known as Cop26, will be the first test of the US administration’s new position in the negotiations.

The summit is a critical moment for countries to raise their climate plans and revert the trend of global emissions growth – a tremendous task without the diplomatic leverage of the world’s largest economy.