If major emitters do not agree to a minimum carbon price, IMF chief Kristalina Georgieva said the EU was right to impose tariffs on imports at the border 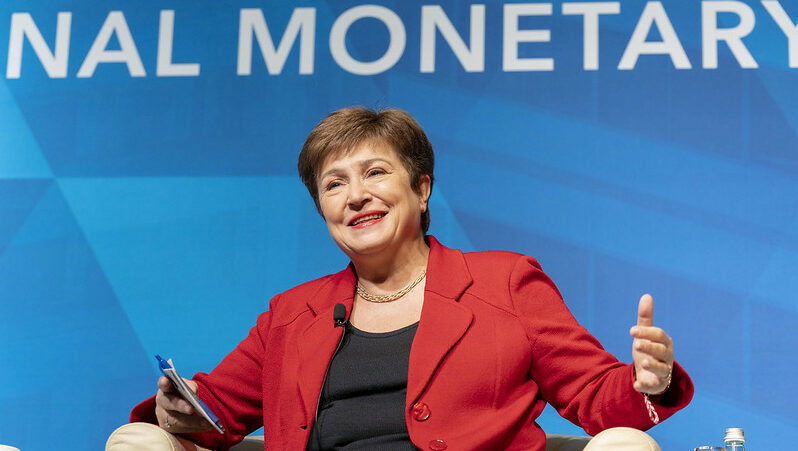 The International Monetary Fund (IMF) has endorsed an EU proposal to impose carbon levies on imports, if other major polluters do not sign up to a minimum carbon price.

EU Commission president Ursula von der Leyen has presented a carbon border tax as an important tool “to ensure that EU companies can compete on a level playing field” with big emitters such as China and the USA. This week von der Leyen announced that the EU would raise its emissions reduction target to at least 55% compared to 1990 levels – up from 40% currently – by 2030.

The main reason for introducing a carbon border tax is to prevent carbon-intensive production from relocating to countries with lower emissions standards, a problem known as “carbon leakage.”

IMF president Kristalina Georgieva on Wednesday called on major emitters to cooperate and draw up a carbon pricing agreement. “The EU cannot stop global warming on its own. But it can bring the world together. A top priority should be an agreement on a carbon pricing floor among major emitting countries,” Georgieva said in a statement.

Georgieva said that in the absence of such an agreement, applying the same carbon price on the same products, irrespective of where they are produced, could help avoid carbon leakage and ensure fairness towards European businesses.

An EU climate mitigation policy published by the fund elaborated on the position: “A carbon border adjustment mechanism could complement the package to avoid an increase in emissions outside the EU due to higher carbon prices in the EU.”

Susanne Droege, senior fellow at the German Institute for International and Security Affairs, told Climate Home it was significant the IMF had publicly endorsed the EU’s plan to introduce a mechanism to avoid carbon leakage at the bloc’s border. “Carbon border tax is a potential option on how to implement that mechanism,” she said.

Harro van Asselt, professor of climate law and policy at the University of Eastern Finland, said several options remain open for how that carbon price could be applied.

“What seems most likely is that it will be in the form of a charge similar to the EU emissions trading system (ETS) allowance price for a limited set of sectors, for example cement and electricity, with importers being required to draw from a separate pool of allowances,” he said.

Russia’s economic development minister said in July that an EU carbon border tax would contravene World Trade Organisation (WTO) rules. China and the US have also clearly stated their opposition and asked the WTO to make the EU clarify its plans, according to Droege.

It is critical that the bloc’s efforts to design the policy go hand-in-hand with diplomatic efforts to reassure major trade partners. “Otherwise there is the real risk of retaliation,” said van Asselt. The EU learned the hard way when it tried to impose the ETS on international aviation in 2012 and was forced to limit the scope to intra-EU flights only following strong international and industry backlash.

Joe Biden has said that if he is elected US president in November, he may introduce a US carbon border tax “on carbon-intensive goods from countries that are failing to meet their climate and environmental obligations.”