Formal withdrawal process could begin within days, but current and former diplomats say US will continue to influence global rulemaking on climate change 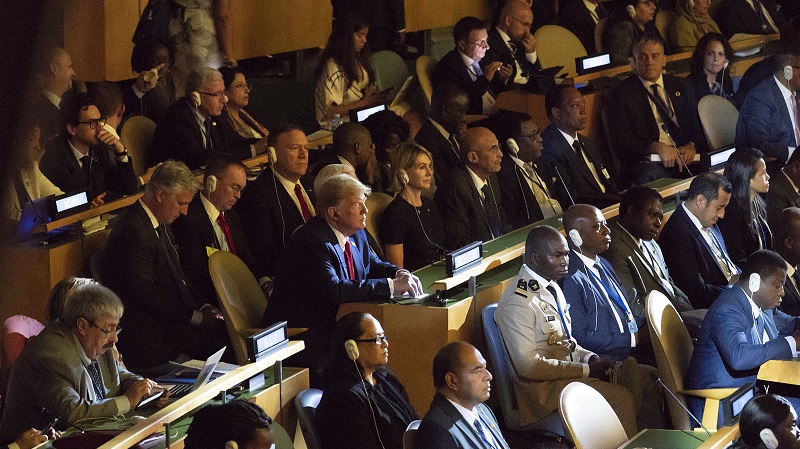 Donald Trump could formally begin pulling out of the Paris Agreement on Monday. But despite abandoning the deal it helped broker, the US government will retain its seat at UN climate talks.

Trump announced his intention to withdraw the US from the landmark Paris deal in the White House Rose Garden in June 2017.

Under the rules of the agreement, Monday is the first opportunity for the Trump administration to formally notify UN Climate Change of its intention to withdraw – three years after the Paris Agreement came into force.

Once the withdrawal process is set in motion, it takes another year for the US to exit the deal, making the earliest time for Washington to leave the agreement 4 November 2020, a day after the US election and five days before the start of the Cop26 UN climate talks in Glasgow – a critical moment for countries to raise their climate target.

During the early months of Trump’s presidency, when he was weighing whether to leave the accord, his then-secretary of state Rex Tillerson urged him to stay and keep the US’ “seat at the table”.

But present and former diplomats told Climate Home News they expect the US will continue to shape global policy on climate change from inside the talks, even after it leaves.

In practice, “they are still going to be in loads of rooms,” Peter Betts, a former UK and EU lead negotiator and an associate fellow at Chatham House, told CHN.

Until they fully withdraw, “the US team can be expected to continue participating,” Sue Biniaz, the state department’s lead climate lawyer for the four administrations before Trump’s, told CHN. The US would be able to make decisions, negotiate the rules and block agreements in the talks.

Since Trump announced the US intention to leave the Paris accord more than two years ago, state department officials have continued to negotiate its rules – albeit with reduced impact, according to Betts. These rules should be finalised before the US can officially come out of the agreement next year.

Even outside the Paris deal the US will remain a party to the UN climate convention (UNFCCC), of which the Paris Agreement is only a part. Unless the state department stops sending delegations, a move observers believe is unlikely, American diplomats will still participate in the negotiations and take part in shaping the final talks outcome. In Paris accord discussions they will be officially designated as observers. That gives them access, but they will lose decision-making powers and the ability to block consensus.

“After that, I imagine they would continue to participate as a party to the UNFCCC and as an observer to Paris,” Biniaz said. This would be the second time the US finds itself in this position, having never ratified the Kyoto Protocol, which governed emissions cuts in the period before 2020.

While its position will be weakened, the presence of the world’s largest economy will continue to have meaning in the negotiation halls, said Betts.

“[The US will] still play a role”, he said. “It is impossible that they will be disregarded all together.”

As the power broker that brought China on side and set the foundations for the Paris deal, “the US is enormously important to the nature and energy behind climate diplomacy all over the world,” Todd Stern, the US’s lead climate negotiator under Obama and a senior fellow at the Brookings Institution, told CHN.

But after leaving the agreement, continued US federal presence at the talks would not be “very consequential”, he added.

With much of the architecture of the Paris deal already agreed, Stern said the negotiations had to focus on actions to decarbonise the global economy. “I don’t think that the Trump administration pulled out of Paris is going to try to play in that arena, or have any credibility if they do,” he said. “But I would not rule out them coming out on a non-Paris issue.”

This could be the case in discussions on loss and damage, the talks on how to account for the impacts of climate change that are not prevented by mitigation or adaptation measures.

The issue has been the subject of long running disputes over whether it should be dealt with in UNFCCC or the Paris Agreement meetings. It has also been fiercely suppressed by US administrations of all stripes, which have been concerned about compensation claims from vulnerable countries. How those discussions would play out after a US withdrawal would have to be agreed by all countries, facilitated by the Cop presidency.

While climate talks will continue, and likely include the US, the major impact of the Trump presidency and its retreat on climate policy continues to be the gap it has left in global political leadership. The impacts of that have already been felt.

At the UN climate action summit in New York, Trump’s surprise appearance only provided context for the failure of the world’s other large emitters to increase their ambition. His reneging on $2bn of commitments to the Green Climate Fund has also left developed countries scrambling to fill the hole.

The US “has already exerted the influence that mattered when it mattered. So whether or not they are still in the room next year… so what?,” a senior developing country diplomat said.

A senior EU official agreed the US withdrawal would have little further impacts on the negotiations. The US has been “constructive” in the talks since Trump took office and “we see them continue,” they told CHN.

“This is no news per se but something that we knew and were expecting. The process continues and the momentum is there. The EU is in a pretty good position and we will continue to lead,” they added.

The formal withdrawal of the US from the Paris Agreement may act as a reminder of Washington turning its back on the multilateral order, but “no one has really been expecting anything other than withdrawal for some time,” Biniaz said.

“I think the world has basically adjusted to the notion of US withdrawal,” she added.

And the US has too. A coalition of states, cities and businesses are pressing ahead with carbon-cutting measures in a bid to achieve the US emission reduction target, bypassing the federal government. The alliance believes their pledges can get the US more than two-thirds of the way in meeting its 2025 target to reduce emissions by 26-28% from 2005 levels.

Of course, all of this could be quickly overturned if a Democrat won next year’s US election. With climate change the strongest it has ever been on the election agenda, every Democratic hopeful has pledged to re-join the Paris accord. A process, which could take as little as 30 days.