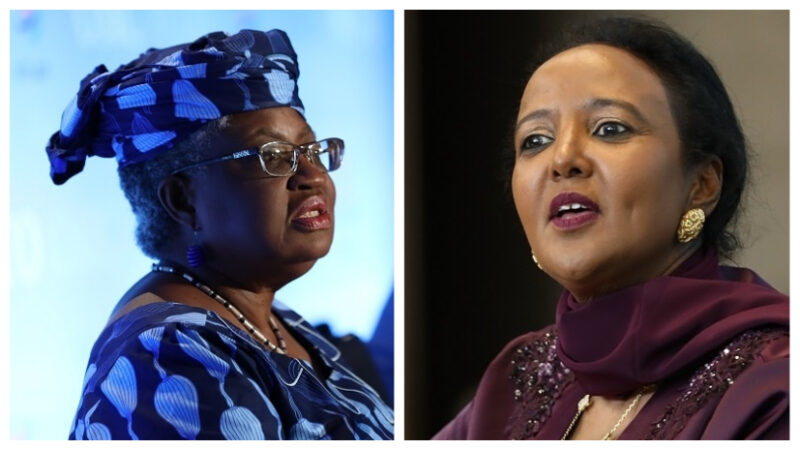 Two African women who have pledged green reforms are the front-runners to become the World Trade Organization’s next director-general in November.

According to analysts from the Center for Strategic and International Studies, many nations, particularly in Africa and the EU, are expected to support both candidates.

Both women used their written candidate statements to call for environmental reform of the WTO’s trade rules, while their three opponents from Korea, the UK and Saudi Arabia, have said little about climate change.

Mohamed, who has held cabinet roles including foreign affairs in the Kenyan government since 2013, said the economic recovery must “take account” of issues like climate change. The WTO should be reformed to “support our shared environmental objectives” and encourage diffusion of clean technologies, she said.

Okonjo-Iweala, former finance minister for Nigeria, said that “the WTO appears paralysed at a time when its rule book would greatly benefit from an update to 21st century issues such as ecommerce and the digital economy, the green and circular economies”. She said she wants to reach “optimal complementarity between trade and the environment”.

She previously co-chaired the Global Commission on the Economy and Climate along with Nicholas Stern, the author of ‘the Stern review’ which raised awareness of climate change in the UK.

The statement of the Saudi Arabian candidate, a former fighter pilot, banker and economy minister Mohammed Al-Tuwaijri’s does not mention climate change or the environment at all.

Myung-hee has been Korea’s first female trade minister since March 2019. The South Korean government promised a “green new deal” and to end finance for coal plants abroad – but was criticised in May for bailing out Doosan Heavy Industries, a major manufacturer of coal technology.

Both Myung-hee and the UK’s Liam Fox criticised fisheries subsidies, which can incentivise over-fishing. Other than that, Fox’s statement did not mention the environment or climate change.

Fox is a former UK trade minister and vocal supporter of the country’s ‘Brexit’ policy. He has been criticised by environmentalists for voting against green measures, meeting a climate change denying US think tank while a minister and saying in February 2019 that “third world” countries need oil and gas.

Mohamed spoke about climate change in a press briefing reported by Reuters. She said the WTO could replicate carbon pricing initiatives like the EU’s “on a grander scale”.

The EU has proposal taxing environmentally-damaging imports if other major polluters do not sign up to a minimum carbon price. The policy is supported by the International Monetary Fund  but Russia’s Prime Minister has labelled it “latent protectionism”.

Cameron Hepburn, an environmental economics professor at Oxford University, told Climate Home that climate change and trade were “closely linked” and “it is good to see Amina recognising this”.

He said that measures like carbon taxes are “rising up the agenda in many nations”. He added: “It is entirely appropriate that countries wanting to price carbon should ensure a level playing field for domestic firms and importers. Even with a patchwork of different national and subnational carbon prices, and different border adjustments, the WTO has an important leadership role to play in ensuring that the trade regime becomes a support rather than a hindrance for progress on climate change.”

Pia Eberhardt, from Corporate Europe Observatory told Climate Home that the WTO is “completely out of sync with the reality of the climate crisis. Changing that requires abandoning the WTO’s many damaging agreements and radical new thinking on how, what and how much we trade”.

Mohammed said that “WTO must be a part of the global conversation on climate change” and that, if she was elected, the WTO’s trade and environment committee would draw up rules for the international trade of environmental goods and services like solar panels and wind turbines.

The last WTO head, Robert Azevêdo, called in 2015 for tariffs on renewable components to be reduced. For example, India has imposed tariffs on Chinese solar panels, partly because of geopolitical tensions and partly because it wants to build up its own manufacturing capacity. This has hindered growth in India’s renewable sector.

Since 2014, a group of WTO countries have been trying to reduce tariffs on green products through an ‘environmental goods agreement’. These nations include those in Europe, North America and Australia but the only major developing country involved is China.

University of Geneva academics have argued that developing countries have ignored the talks as they tend to have higher tariffs on green products and so are the most worried about a potential flood of cheap imports. These countries often don’t have the environmental regulations to produce environmental goods and so have little to gain, the researchers said.

The WTO’s rules have often been used by environmentally damaging industries to challenge green measures. In 2017, palm-oil producing nations threatened to sue the EU over a proposed ban on the product’s use for biofuels, which is linked to deforestation. The ban has yet to be implemented.

The WTO allows governments to target environmentally destructive products, but critics say that the criteria for doing so are too limited.

Climate Action Network (Can) Europe wrote in a policy briefing: “The initial burden of proof lies with the trade-restricting state. It must show that trade restrictions are necessary to its environmental policy, proportionate to their objective and applied in a non-discriminatory fashion. The arguments provided are analysed and evaluated through the lenses of international trade law, by WTO adjudicators. This results in a structural supremacy of trade law over environmental law.”

Can Europe called for a climate waiver to be added to the WTO’s rules, exempting green policies. And it argued countries should be allowed to encourage local procurement in renewable energy projects, to make them more politically appealing.

Last December, Kenya made the issue of climate change central to their successful bid for a UN Security Council seat, which it will take up in January. The East African nation faces food and water shortages linked to climate change.

Currently, the WTO’s members are secretly giving their opinions on who should be elected. After this process, the candidates will be whittled down to two. The winner is then expected to be announced in November 2020. The decision-making is by consensus.