The immediate priority is to protect workers, argued Svenja Schulze, resisting calls to impose green conditions on a €10 billion support package for Lufthansa 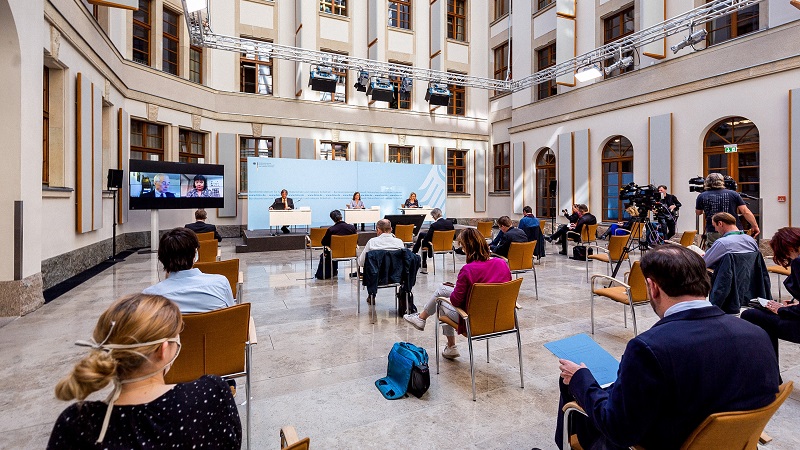 Germany’s environment minister has defended a planned bailout of the country’s largest airline to protect jobs in the short term, insisting the next phase of post-coronavirus recovery will be green.

Lufthansa is in talks with the German government over a package reportedly worth €10 billion. The company warned it had cash to survive just weeks as flights were grounded to halt the spread of Covid-19.

Campaigners have repeatedly called for any state aid to carbon-intensive sectors like aviation to be conditional on measurable climate action, but environment minister Svenja Schulze said now was not the time to impose green conditions.

“I do not want to question the bailout money we are dispersing round. We have been internationally commended on our policy on quick help and this is right,” said environment minister Svenja Schulze at the opening press conference of the Petersberg Climate Dialogue, a mainstay of the climate diplomacy calendar, which Germany is co-hosting with the UK this week.

The two-day event is taking place by video conferencing as the world continues to grapple with the coronavirus pandemic.

Ministers from 30 countries are participating in the online talks, with a focus on how to design an economic recovery to the Covid-19 crisis with job creation and climate protection at its core.

Schulze argued the economic response to the pandemic required different approaches in the very short term and in the months following the ongoing public health crisis.

“We are still in the very midst of the crisis. So what we have are short term funds to help businesses survive this crisis. This is a protective shield for workers and employees,” she told reporters on Monday.

Responding to questions about how the Lufthansa bailout aligned with the green recovery, Schulze said now was the time for “quick, targeted help”.

“But there will be a time after the crisis,” she added, describing the second phase of the economic response as a recovery plan that follows “a compass of climate action and social progress” aligned with the Paris Agreement and climate neutrality objectives.

“Rescue is rescue,” agreed Nick Stern, chair of the Grantham Research Institute on Climate Change and the Environment at the London School of Economics and an advisor to the UK presidency of Cop26 climate talks.

Joining the press conference by video link from the UK, Stern said: “The first weeks and months are for protecting employment and preventing the economy from imploding. That should be the priority.”

Stern warned against discriminating against specific industries, such as airlines, in the rescue phase of the Covid-19 response. “But rescue moves to recovery,” he said: a second phase to start in summer or autumn this year.

“Of course energy companies and airlines are going to have to change and you don’t try to wipe them out in the weeks of rescue, what you do is you protect employment and then you move to the encouragement of the change,” he added.

Bailouts to the aviation industry have dominated countries’ immediate response to the pandemic. The sector has been brought to its knees from a near-shutdown of air travel.

European airlines have sought €12.8 billion in government bailouts since the start of the pandemic, according to a tracker created by campaign groups Transport & Environment, Greenpeace and Carbon Market Watch.

Air France-KLM is expected to receive a €10 billion relief package in loans and guarantees from the French and Dutch governments.

France’s finance minister Bruno le Maire unveiled €7 billion in support for the carrier on Friday, including €4 billion of state-backed loans and €3 billion of direct loans.

Le Maire warned the relief package was “not a blank cheque” but that support was dependent on environmental conditions, including a CO2-cutting plan and for Air France to become “the most sustainable airline on the planet”.  Details on what this means are yet to be finalised and the European Commission still needs to approve the plan.

Back online, ministers taking part in the Petersberg Climate Dialogue are due to discuss how to maintain momentum for climate action this year. A key UN climate summit, Cop26, initially due to be held in Glasgow, UK, in November has been postponed to an unspecified date in 2021.

Schulze, said the international community should “stick to the schedule set by the Paris climate agreement” and that countries needed to “present updated climate protection goals this year”.

Under the Paris Agreement, countries are due to communicate or update their 2030 climate plans and publish a long-term decarbonisation strategy before 31 December, regardless of the timing of Cop26.

So far, only a handful of countries including the Marshall Islands, Suriname, Norway and Chile, have submitted tougher mid-term plans to the UN. But the timetable for raising ambition is looking increasingly likely to slip.

New Zealand reaffirmed its existing 2030 target last week, while waiting for independent advice on how to align its climate plan to the 1.5C goal expected in early 2021. The pandemic has also hampered developing countries’ ability to design new plans before the end of the year.

Schulze insisted the EU needed to “send a clear signal” for climate ambition by submitting its updated 2030 climate plan to reduce emissions by 50-55% from 1990 levels. She added the union needed to do “everything possible” to encourage other major emitters to step up.

Countries represented at the dialogue include China, India, Japan, Chile, European member states, small island states such as the Marshall Islands and other developing nations such as Ethiopia and Bhutan.