Governments, at a fork in the road because of the Covid-19 pandemic, should ‘insert the DNA’ of a low-carbon future into stimulus packages, says Achim Steiner 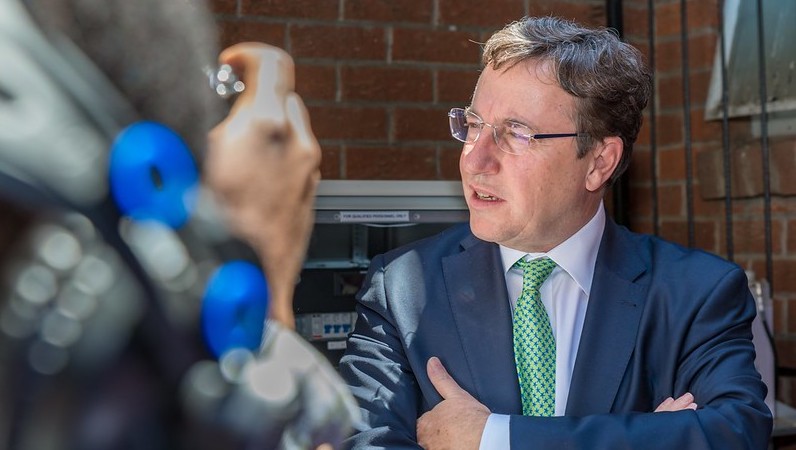 Post-coronavirus stimulus packages must shift the economy away from its “irrational” oil dependence to a greener future, according to the UN development chief.

Achim Steiner, head of the UN Development Programme (UNDP) said the pandemic would transform societies. It would be impossible simply to reactivate the pre-Covid-19 global economy in the way that billion-dollar bailouts helped revive growth after the 2008 financial crisis.

“It’s a kind of a fork in the road for every country,” he told Climate Home News in a video interview from New York, adding that developing nations were especially vulnerable. “You have an opportunity to either invest in returning to yesterday’s economy or to invest into tomorrow’s economy.”

The coronavirus has killed more than 190,000 people worldwide.

Steiner said that the plunge in benchmark US oil prices to lows of around minus $40 a barrel on Monday – meaning producers and traders paying to get rid of it – highlighted a need to break dependence on fossil fuels and move to greener energies such as solar and wind power.

Crude began the year trading above $60.

“The fact that the lifeblood of our economy for much of the last 100 years has been dependent on a substance (whose price) oscillates literally in a few months by 200%, sometimes 300% … is in itself an illustration of how irrational our energy has become,” he said.

He said that nuclear power had also failed to live up to promises of being a cheap and safe source of energy. Nuclear power “is a 20th century technology that is on the way out. Fossil fuels are rapidly moving in that direction.”

In government planning “there are thousands of possibilities in our daily economic transactions to insert the DNA of a low-carbon transition and recovery strategy. These are the possibilities we now need to test,” he said.

He noted that the Austrian government, for instance, said this month that state aid for Austrian Airlines should support climate policy targets. Similar opportunities to shape a greener future existed in all stimulus packages.

At the same time, he said that many countries, especially developing nations dependent on oil exports, needed to safeguard jobs and would need time to reform.

“You can’t talk a terrible crisis into a rosy opportunity,” he said. “We need to now have governments and markets design their strategy of exiting from fossil fuels over a period of probably 50 years, but with increasing and accelerating pace.”

Almost 200 governments committed in the 2015 Paris climate agreement to achieve net zero greenhouse gas emissions in the second half of this century. That is seen as essential to limit rising temperatures that scientists link to wildfires, heatwaves, rising seas and more powerful storms.

This week, the International Renewable Energy Agency (Irena) estimated a deep decarbonisation of the world economy by 2050 requires total energy investment up to $130 trillion.

It would boost cumulative global GDP gains above business-as-usual by $98 trillion between now and 2050 and have benefits such as quadrupling renewable energy jobs to 42 million, Irena said.

Steiner said a green transition would also help reduce climate change and air pollution that kills millions of people a year. There were also risks that fossil fuel reserves would become stranded assets, that were unusable and worthless for investors.

Developing nations were most at risk from coronavirus and restrictions on trade and travel, since they cannot mobilise billions of dollars to shield their citizens.

In the Indian Ocean state of the Maldives, for instance, “no tourism means no economy,” he said.

Steiner was head of the UN Environment Programme at the time of the financial crisis and urged the adoption of a Global Green New Deal in 2009 to shift economies away from fossil fuels, one of the first uses of an idea that has since caught on far more widely.

In 2009, the reaction “was still a very partial and relatively limited green stimulus” even though nations including China, the United States, the European Union and South Korea and others invested billions of dollars into green measures.

And Covid-19 “isn’t a crisis we can solve with bailouts,” he said. “This time we are not going to see a return to a pre-Covid normal. It’s not just about getting back the economy we had before.”

He governments should put more resources into planning for the future.

“This is not a black swan, this is not Rumsfeld’s unknown unknown,” he said of the pandemic, referring to former US Defense Secretary Donald Rumsfeld who spoke of “unknown unknowns” when discussing uncertainties about Iraq’s weapons arsenal.

“We have just been catapulted into that domain where oil is something that we actually cannot use,” Steiner said.