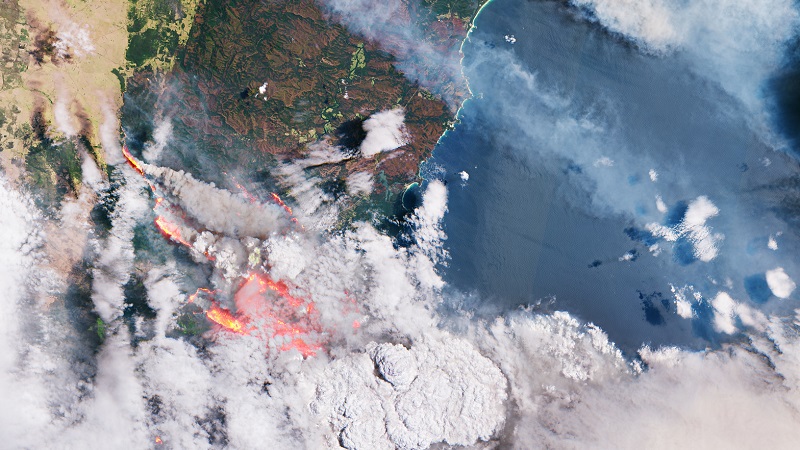 Ferocious bushfires have swept across Australia since September. The picture was taken by a Copernicus Sentinel-2 mission satellite on 31 December 2019. (Photo: European Space Agency/Flickr)

Today, Australia continues to burn as the country struggles to come to grips with the crisis.

Worsening weather conditions in the south-east of the country prompted authorities to call for another mass evacuation in the most heavily populated areas.

On Thursday, Australia’s Bureau of Meteorology said 2019 had been the country’s warmest and driest year on record with temperatures 1.52C above average and rainfall at the lowest since record began in 1900.

The crisis is anticipated to cost billions of dollars in recovery efforts and the country’s bill for tackling natural disasters is expected to soar in coming decades with worsening climate change.

Pro-coal Prime Minister Scott Morrison announced a $2billion AUS ($1.4bn) national bushfire recovery fund this week to help communities rebuild their lives. “If further funds are required, further funds will be provided. We will do whatever it takes,” he said.

While the fire response continues, thousands of people from Sydney to Hobart have taken to the streets denouncing government inaction on climate change.

Across the country, the bushfire crisis could catalyse a debate about Australia’s climate policies (or lack of) and the need to build resilience within its communities. If not now, then when?

Outside Australia, the EU’s earth observatory programme Copernicus found 2019 was the second warmest year since record began in the 19th century, ending the world’s hottest decade yet.

In 2019, global temperatures were almost 0.6C warmer than the 1981-2010 average with the five hottest years all occurring in the last five years. Scientists say this long-term trend is to be expected as the concentration of CO2 in the atmosphere continues to rise.

The heat is now on governments to reverse the trend of emissions growth and take concrete steps to shift economies away from fossil fuels. So far, major economies have not stepped up to the task.

Austria has a new government and it’s greener than ever.

A right-wing-Green coalition government was sworn in after months of political wrangling. Chancellor Sebastian Kurz’ right-wing and anti-immigration People’s Party came out on top in September’s election but without sufficient support to take the reins alone.

In an unusual alliance, the Greens accepted to make “painful concessions” to enter government for the first time and drive an ambitious programme of climate policies, including reaching net zero emissions by 2040.

Whether the coalition survives the ruling test is to be seen. Others across Europe are watching.

In her New Year speech, Chancellor Angela Merkel said the German government would “do everything humanly possible” to stop climate change.

But Germany is one of a number of countries to have missed an EU deadline to submit its national energy and climate plan accounting for how it will achieve the bloc’s 2030 target.

The German government said it had not yet shared its plan with Brussels because of a delay in the adoption of its climate protection law in the upper house of Parliament.