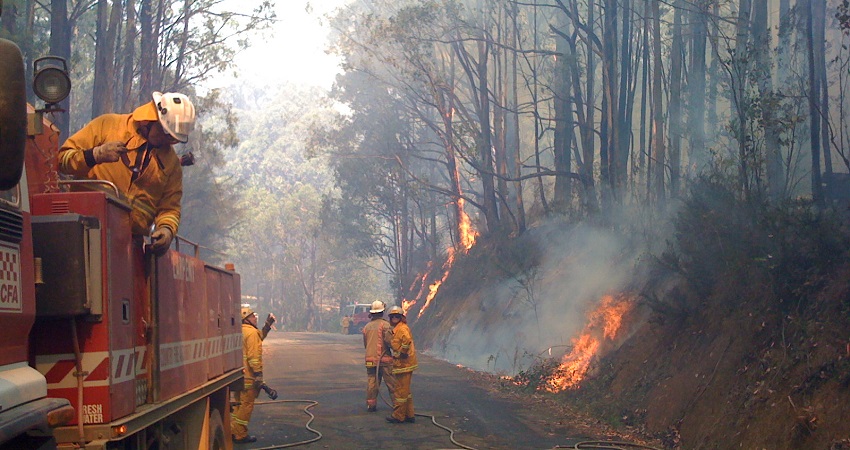 Prime Minister Scott Morrison has announced the creation of a Bushfire National Recovery Fund to help communities recover from the fire-front. (Photo: Robdownunder/Flickr)

Bushfires ravaging Australia are expected to cost billions of dollars in recovery efforts and the nation’s bills for tackling natural disasters risk soaring in coming decades with worsening climate change.

Record-breaking temperatures and severe droughts have fuelled the fires which have burnt millions of hectares across the country. At least 24 people and hundreds of thousands of animals have been killed.

Data from the Australian government Bureau of Meteorology shows December’s mean temperature was 3.21C warmer than the average for the month. Ed Hawkins, a professor of climate science at the University of Reading, said the country’s mean December temperature had warmed about 1.4 times faster than the global annual average temperature over the past century.

But pro-coal Prime Minister Scott Morrison has denied the link between climate change and the unprecedented intensity of bushfires across the country, describing it as “misconstrued”.

On Monday, Morrison announced the creation of a National Bushfire Recovery Agency, initially funded to the tune of $2billion AUS ($1.4bn) over a two-year period to help families, farmers and businesses recover from the fire-front.

However, the money could fall short of the recovery effort needed.

“If further funds are required, further funds will be provided. We will do whatever it takes,” Morrison said. “What we are focusing on here is the human costs and the rebuilding cost for people’s lives.”

The money will be used rebuild roads and telecommunications infrastructure, replenish producers’ livestock, provide mental health support and help restore the impacted environment and wildlife. The funds are due to come on top of disaster recovery payments and allowances, of which $100m AUS ($69m) has already reached communities, according to the government.

The agency will be modelled on a recovery fund set-up following cyclone Yasi and the Brisbane floods in 2011. At the time, that fund paid out $5.6bn AUS ($3.9bn) over six years.

Ten years ago, a series of bushfires across the state of Victoria known as the Black Saturday bushfires cost at least $4bn AUS ($2.8) in damage, according to an estimate by the royal commission charged with the investigation.

“It would be a mistake to treat Black Saturday as a ‘one-off’ event,” the 2010 report noted. “With populations at the rural–urban interface growing and the impact of climate change, the risks associated with bushfire are likely to increase.”

On Monday, the Insurance Council of Australia said it has handled more than 6,000 insurance claims from the states worst-affected by the bushfire crisis, New South Wales, Queensland, South Australia and Victoria. Insurance losses have so far been estimated at $431 million AUS ($297m).

The bushfire smoke that descended on Sydney cost the city between $12m AUS ($8.3m) and $50m AUS ($34.5m) a day, according to Terry Rawnsley, a regional economics expert at the consultancy SGS Economics and Planning.

For Richie Merzian, climate and energy programme director at the Australia Institute think-tank, the recovery fund announced by Morrison will fall short if it isn’t accompanied by further climate policies.

“The $2bn AUS fund is another ad hoc measure without a clear long term strategy to address climate change. Nor is it anywhere close to enough,” he told Climate Home News.

The Australia Institute has called on the creation of a National Climate Disaster Fund, which would be financed by a $1 AUS levy for every tonne of CO2 resulting from the production of coal, gas and oil in the country.

The levy could raise around $1.5bn AUS ($1bn) a year, according to the think-tank.

A 2017 analysis by Deloitte Access Economics found natural disasters cost Australia $9bn per year on average. The report found the cost could reach $27bn per year by 2050.

“A modest levy on fossil fuel producers would help to shift the economic burden of these disasters from regular Australians to the coal and gas companies that are fuelling the climate crisis,” said Australia Institute’s deputy director Ebony Bennett.

The costs of wildfires is difficult to estimate due to the indirect costs such as the destruction of wildlife and the environment, damage to public health and harm to tourism.

Swiss Re, one of the world’s largest insurance companies, found direct economic losses only represent a fraction of the true economic impact, which can span years.

Across the world, the economic cost of wildfire has increased in recent decades. In 2017, direct economic losses from wildfires amounted to $21bn worldwide – up from $6bn in 2016, according to Swiss Re.