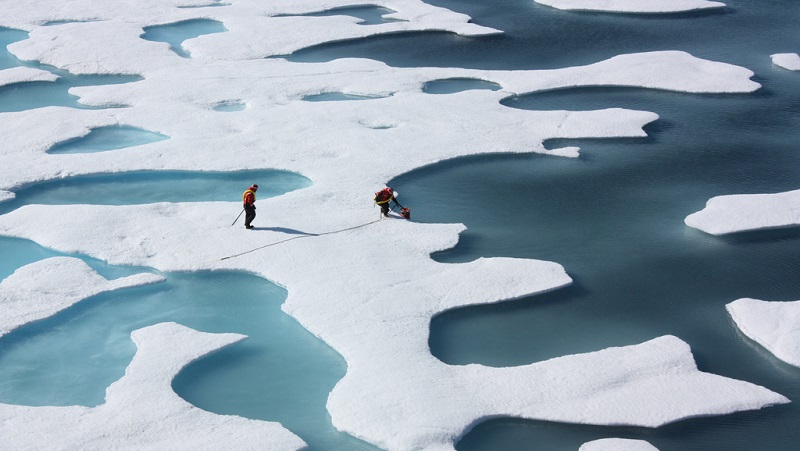 In 2019, Alaska and large parts of the Arctic saw the most pronounced warming compared with the 1981-2010 average. (Photo: Nasa Goddard Space Flight Center/Flickr)

2019 was the second warmest year on record and the hottest in Europe, according to the EU’s earth observation programme.

The data by Copernicus’ climate change service provides the first global picture of temperature levels and CO2 concentration in 2019.

The findings show that the global average of surface air temperature in 2019 was only 0.04C lower than in 2016, the hottest year on record when temperatures were boosted by a particularly strong El Niño weather event. El Niño weather patterns did take place in 2019 but were not as strong.

However, global temperatures in 2019 were almost 0.6C warmer than the 1981-2010 average and monthly temperatures recorded for December were jointly the warmest for the month on a par with 2015.

The last five years were the hottest since records began in the 19th century with average temperatures between 1.1C and 1.2C higher than pre-industrial times, making 2010 the hottest decade yet. The 2015 Paris Agreement sets a goal of limiting global warming to “well below” 2C above pre-industrial times while pursuing efforts for a 1.5C limit.

Global average temperatures in 2015, 2017 and 2018 are considered too close together for a ranking to be established.

Freja Vamborg, senior scientist at the Copernicus climate change service, told Climate Home News: “This is in line with what we can expect from a global warming trend.”

“The main issue is the long-term trend,” said Vamborg. “This is slowly but surely creeping upwards and as such these kinds of events like heatwaves become more likely,” she said, citing the intensity of the heatwaves that hit Europe last year.

In 2019, Alaska and large part of the Arctic saw the most pronounced warming compared with the 1981-2010 average. Southern Africa and Australia, where record-breaking temperatures and severe droughts have fuelled an unprecedented bushfire crisis, were also warmer than average.

Carbon concentration in the atmosphere has continued to rise in 2019, adding pressure on governments to reverse the trend by taking more ambitious climate action.

According to the International Panel on Climate Change (IPCC), limiting global temperatures to 1.5C with no or limited overshoot requires reducing emissions by 45% from 2010 levels by 2030 and reaching carbon neutrality by 2050.

UN secretary general António Guterres called on countries to come to his climate action summit in New York in September with plans to this effect. But none of the world’s major economies responded to his call.

The later governments take action to reduce emissions, the steeper the cuts will need to be for the world to limit warming to the goals of the Paris Agreement. Governments adopted the Paris deal at the end of 2015, which was the warmest year on record at the time.

Copernicus’ findings confirm previous projections from the World Meteorological Organisation (WMO). In December, the WMO said 2019 was on track to be the second or third warmest year on record.

The WMO is due to publish its overview in the second half of January, once data is compiled from other sources including Nasa, the US National Oceanic and Atmospheric Administration and the UK Met Office. Copernicus’s analysis, which is obtained by feeding millions of daily observations into a weather model, usually matches WMO findings.