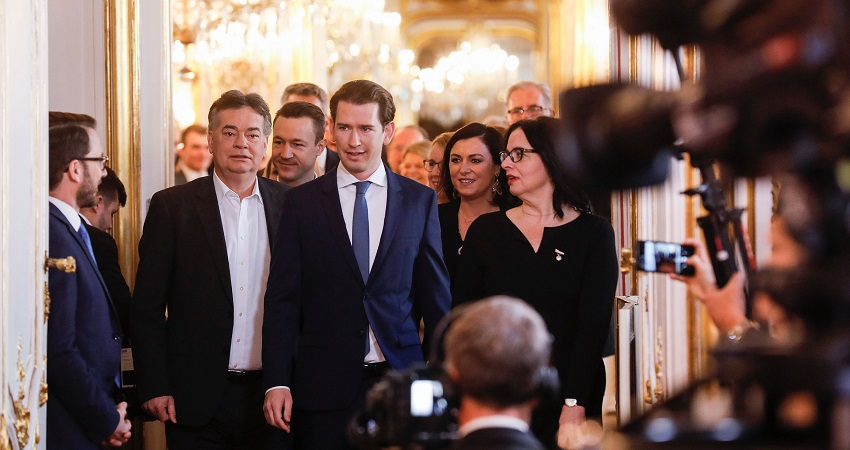 Austria’s first Conservative-Green coalition government was sworn in on Tuesday, bumping climate action to the top of the administration’s priorities with a goal of net zero emissions by 2040.

Chancellor Sebastian Kurz, of Austria’s right wing People’s Party, returned to power at the head of an unlikely coalition with the country’s Greens party.

The alliance, which marked the first time the Greens entered government, was the result of months of political wrangling and negotiations following an election in September last year.

The election was called after the publication of secret recordings of former vice-chancellor and leader of the far-right Freedom Party (FPÖ) Heinz-Christian Strache led the coalition government to collapse.

In the September election, the People’s Party came on top with 37% of the votes, not enough to form a majority government. The Greens obtained 14% of the ballots, behind both the Freedom Party and the Social Democrats.

Until now, Austria’s goal has been to cut emissions by at least 40% below 1990 levels by 2030 as part of a broad European Union target. The European Commission wants the EU to increase the ambition of the 2030 cuts to at least 50 percent.

Austria’s coalition has also agreed to set-up a task force to reform the country’s ecotax in 2022, with the aim to put a carbon price on sectors not covered by the EU’s Emissions Trading Scheme (ETS) and increase the price of CO2 emissions.

Setting climate targets for all federal institutions, improving energy efficiency and rolling out zero-emissions vehicles are also part of the 326-page coalition plan.

In a statement, the Green party said it had entered the coalition with Kurz’s conservatives because “we are convinced that the change of course is good for our country”.

“Not everything bears a green signature and yes, we sometimes had to make painful concessions,” the statement said, adding that the party was able to implement some of its key policies.

The coalition will be watched closely in the coming months, particularly in Germany where the Greens could supplant the Social Democrats (SPD) in a coalition with Angela Merkel’s conservative CDU.

In the European elections in May, the German Greens surged to win a historic 20.5% share of the vote, ahead of the centre-left SPD, the junior coalition partner in Merkel’s government.