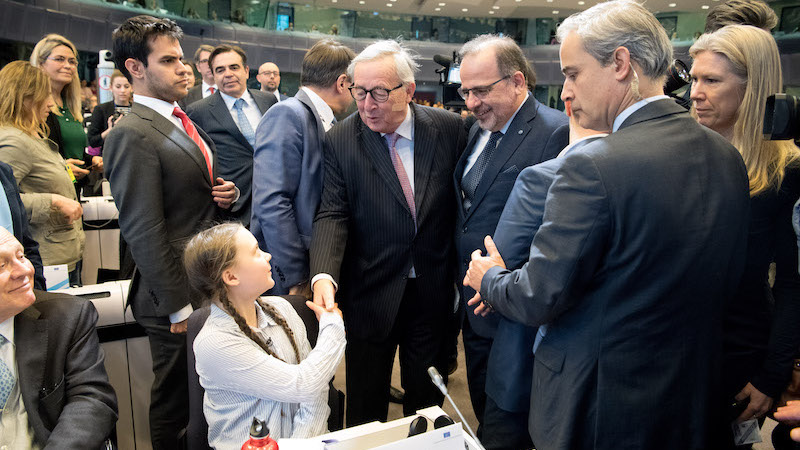 Brussels is good at talking the big talk on climate change, but cementing its rhetoric is often a tougher slog.

Case in point this week: the EU once again made ambitious promises and called on others to follow its lead – first in a meeting between foreign ministers, then in response to the green movement’s newest poster child, Greta Thunberg.

But when it comes to translating those promises into, say, trade agreements, the change can be harder to spot… at least in the face of American threats of tariffs.

A European Parliament committee endorsed opening talks for two trade agreements with the US, contrary to the bloc’s pledges to only strike deals with countries committed to the Paris Agreement, Natalie Sauer reports. New agreements with Mexico and Japan do refer to the climate accord.

The EU will put money behind its promises, Juncker added: “From 2021 to 2027, every fourth euro spent within the EU budget will go towards action to mitigate climate change,” Reuters reported.

“If the president comes here with soldiers, I have my arrow” – Elisa da Silva, a cowgirl in Brazil’s Amazon, on Jair Bolsonaro’s threats to re-open indigenous lands

When indigenous leader and congresswoman Joênia Wapichana first encountered Brazil’s now-president Jair Bolsonaro, her side came away with a win. The Supreme Court ruled in favour of demarcating the Raposa/Serra do Sol Indigenous Land (TIRSS) for its 25,000 inhabitants – against the Bolsonaro-backed white farmers.

A decade later, that indigenous victory is threatened, Fabiano Maisonnave reports from the TIRSS.

Bolsonaro has appointed a cattle rancher who until recently headed a far-right group opposed to land demarcation to revise the TIRSS and other demarcations.

In Ireland, climate change is a political hot potato that governments have tended to kick down the road – wary of disrupting signs of economic revival such as increased driving and dairy cows.

Now an assembly of 99 citizens could push Dublin to take on expensive measures such as carbon taxing. It remains to be seen what the government does. But Ireland’s bottom-up approach to policymaking is in the vanguard of a trend towards more participatory democracies aimed at building consensus on thorny issues such as Brexit, French tax reforms, and climate change.

South Africa moved ahead this week with a long-awaited Carbon Tax Bill and the restructure of its ailing state-owned utility Eskom, which owns most of the country’s coal plants.

The changes at Eskom will allow for the expansion of renewables, finance minister Tito Mboweni said. That’s in a country where coal now supplies 90% of power. The carbon tax should take effect on 1 June, once it’s rubber-stamped.

Climate experts said the immediate effects of the carbon tax would be limited.

Tensions between Australia and its Pacific neighbours flared after former prime minister Kevin Rudd suggested Australia could take residents from islands sunk by climate change – in exchange for maritime and other resources.

Australia is frequently tangled between its refusal to quit coal and the visible effects of climate change in the country and its region. Without touching coal or other resources, Canberra has made two recent overtures.

First, it will aim to plant a billion trees by 2050. (That’s expected to remove 18m tonnes of greenhouse gas per year by 2030, out of the country’s current 500m tonnes of annual emissions, Bloomberg noted). Next, Canberra is putting the finishing touches on a plan to add A$1bn to its Emissions Reduction Fund, according to The Australian.