The Citizen’s Assembly could become a model for developing informed, fair and ambitious climate policy – if the government accepts its recommendations

Ireland’s struggle with climate change cuts to the heart of people’s daily lives and reflects the country’s revival after recession: more cars on the road and thriving cattle farms.

That makes it a political hot potato that Irish governments have tended to kick down the road – until it came to an assembly of 99 randomly selected citizens, tasked with weighing in on some of the country’s most contentious social issues.

The Citizens’ Assembly spearheaded Ireland’s vote to overturn an abortion ban in 2018, after a similar public consultation led to the vote to allow same-sex marriage in 2015. Now, the assembly could force Dublin’s hand on divisive and expensive new measures to tackle climate change, including raising the carbon tax on road fuels and extending it to agricultural emissions.

How closely the government sticks to the citizens’ 13 recommendations on climate change remains to be seen in the next few months. But Ireland’s bottom-up approach to policymaking is at the vanguard of a trend towards more participatory, consultative democracies aimed at building consensus – and political cover – on thorny issues such as Brexit and French tax reforms.

The key: strip out the party politics and arm the public with information.

Youth climate strike: ‘If not us, who?’

“Politicians are looking over their shoulders the whole time at the next elections,” said Mike Loughnane, one of the Irish assembly’s members, from Dublin. “If the model is constructive, in such a way that encourages honest and open debate, then honest and open debate will result. If you bring in less baggage, there’s less contention.”

British politicians, including former prime minister Gordon Brown, are pointing to the Irish example in calling for a series of citizen assemblies on Brexit. This would lead to “constructive reconsideration by parliament of our relations with Europe”, Brown wrote in a Guardian op-ed last month.

It could also help build support for climate change efforts, as the focus spreads from big industries such as fossil fuels to sectors that touch the wider public, such as transport, home heating, food and farming.

The UN’s intergovernmental panel of climate scientists said as much in its report on limiting global warming to 1.5C last October. Education, information and community approaches can accelerate changes in behaviour, as long as the changes are seen to be distributed fairly, it said.

Perhaps taking that cue, French president Emmanuel Macron launched a ‘great national debate’ in January on four issues, including climate change, in an effort to quell the gilets jaunes protests sparked by his attempt at raising the diesel tax.

The Irish government, on the other hand, points to those French protests to explain why it is treading more carefully.

“As the taoiseach [Leo Varadkar] has indicated, we need to get this right – we need to bring people with us,” MP Hildegarde Naughton, from Varadkar’s centre-right Fine Gael party, told a Dublin City University conference this month. “Taxing or carbon pricing or whatever you want to call it – it’s not an easy issue in any country, and we saw what happened in France in relation to the protests.”

Naughton chairs the cross-party parliamentary committee that is debating the Citizens’ Assembly’s recommendations on climate change. It expects to publish a report at the end of February. Climate action and environment minister Richard Bruton said he will then set out climate targets across all government departments.

Irish climate advocates were initially sceptical about giving such a touchy, broad and complex issue to the Citizens’ Assembly. Then they were surprised by the strength of recommendations published last April.

The citizens backed a higher and wider carbon tax – something Varadkar chose not to announce in his October budget, saying he wanted to ensure there was cross-party support. They also favoured incentives for electric vehicles, especially in rural areas; an end to subsidies for peat extraction while protecting workers’ rights; and the expansion of public transport and bus and cycle lanes.

These would be significant changes for one of Europe’s worst performers on climate change.

Ireland has won praise for its renewable electricity growth and the parliament’s vote last summer to make it the first country to fully divest from fossil fuels. But its biggest problem is with farming, cars and industries like cement, food and aviation, not energy.

The country is on track to miss an EU-mandated emissions reduction goal for 2020, according to the Irish Environmental Protection Agency. Agricultural emissions edged up in 2017 due to more dairy cows. Transport emissions slipped for the first time in four years, but that was attributed to a Brexit-related anomaly: fewer drivers crossed from Northern Ireland to buy fuel, because the British pound was cheaper. The number of Irish drivers still increased.

The question now is whether policymakers take up the citizens’ mantel. Naughton said the cross-party committee has not yet decided which sectors should pay a carbon tax, but stressed that farmers will need to reduce their emissions while increasing and diversifying their food production. 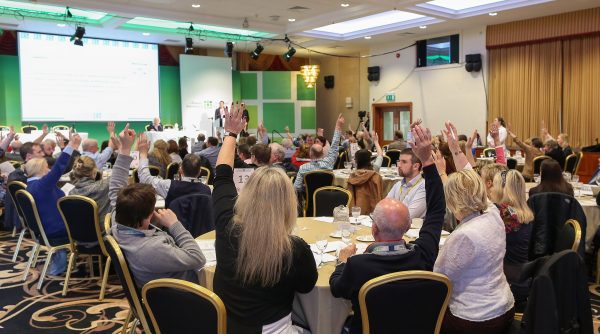 Members of the Citizens’ Assembly vote on the wording of ballot questions at a meeting in Dublin
(Pic: Citizens Assembly/Maxwells)

Touted as an “exercise in deliberative democracy”, the Citizens’ Assembly started in late 2016 with members chosen at random and varying in age, gender, social class and location.

They were tasked with weighing in on five policy issues including abortion, how to deal with an ageing population, and climate change, and met over 12 weekends until it wrapped up in mid-2018. They listened to experts, broke out into discussion groups, and voted on recommendations.

“The Citizens’ Assembly showed that if you structure the debate around information, discussion, questions and answers, and allow citizens to really thrash things out with expert advice – in a manner that is intelligible to them – very often people will shift their positions,” said Sadhbh O’Neill, an expert adviser to Naughton’s parliamentary committee and a PhD candidate on environmental policy at University College Dublin.

Given that success, Ireland should now make this people power an institutionalised fixture that works “hand-in-glove” with the government, said Loughnane.

“The capacity of your average citizen to tackle such things, including myself to a large degree – I was hugely impressed,” he said. “Politicians can fob things off, they can go back to their political agendas, they’re looking over their shoulders for elections. They’re kicking the can down the road.”