As climate talks stall, it’s clear the UN process is no longer the major driving force of the climate transition. But does that matter? 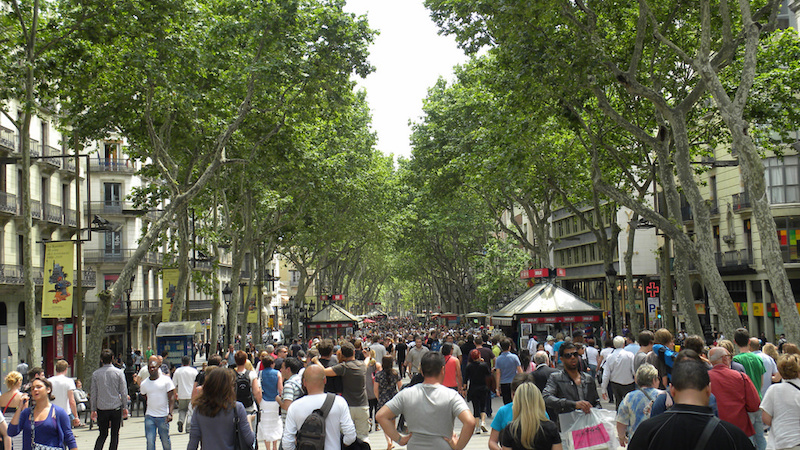 Not a car in sight. Barcelona's superblocks have created a car free space in the city centre, now other cities are copying the idea (Photo: JasonParis/Flickr)

Like an old car that has gone as far as it can go, UN climate talks in Bonn last week stuttered, spluttered and stalled.

In 2015 in Paris, governments struck a deal that lacked much of the substance needed to fight climate change. Now diplomats are trying to negotiate the complex rules of the deal. Their failure to make serious progress has been met with concern around the world.

Climate negotiations are becoming ever-more detached from the starburst of activity released by the Paris deal. In the coming years, the role of the UN will remain important, but no longer be the primary driver of global change.

Not willing to wait for the finer details, businesses, researchers, governments and citizens are coming up with new ways to move the climate to a safer place. There are thousands of stories, big and small. Here are just a few.

1. Looking down from space
Kenyan herders no longer have to rely on instinct or rumour to find the best grassland for their livestock. An app called Afriscout uses satellite data to point them in the right direction, Thomson Reuters Foundation reports.

It is one of the latest innovations to bring the world’s poorest into the information age and help them ride out increasingly volatile weather patterns.

The project is sponsored through US foreign aid. Under the Paris Agreement, rich countries committed to mobilising tens of billions of dollars every year to help poor countries cope with climate change.

The pact also put adaptation to the impacts of climate change on an equal footing to emissions reduction – the latter historically preoccupying the developed world.

As science and policy scramble to catch up, images from space can increasingly guide decisions on the ground.

In 2017, Chile released a sweeping new plan to reform its coal-heavy power sector. The Paris deal is referenced throughout the 250-page policy paper. Since the law was announced, the country has also announced a coal phase out and its new centre-right president has called for 100% renewable electricity to be achieved by 2040.

Every country that has signed the Paris Agreement has at least one climate law or piece of legislation aimed at a cleaner energy sector. Since the deal was struck in 2015, governments have implemented 106 new laws. This has opened up new avenues for suing governments who don’t act on climate change (see below).

However, the strength of the laws varies, according to the Grantham Research Institute, which maintains a handy database of all of these laws. Just 28 of the laws signed since the Paris deal actually make reference to it. This disconnect “might hinder” countries from attaching their domestic laws to the global transition that is underway.

We need to ask for your help.

Become a CHN member for as little as US$5 per month to help us keep bringing you the most in-depth coverage of climate politics and uncovered stories from around the world.

Campaign group Urgenda scored a notable victory in 2015, citing commitments the Dutch government had made in international fora. The government was forced to tighten its 2020 emissions targets.

While the verdict is under appeal – the next hearing is due on 28 May – it forced climate protection up the political agenda.

Prime minister Mark Rutte struck a coalition agreement to phase out coal power and is leading calls for the EU to raise its ambition.

Other cases use human rights, clean air or freedom of information arguments to hold governments and corporations to account.

Paris deal: Eyes on ministers to intervene as talks get mired in old battles

The outlook for the world’s tropical forests is not good. But there are pockets of hope. On a sandbar in the Brahmaputra river, India, one man has almost single-handedly grown a 550 hectare forest.

Jadav Payeng took over an abandoned government scheme in the 1980s and has persuaded his community of the benefits to tree-planting.

The Mulai Kathoni forest prevents erosion and supports livestock for the growing human population. At the same time, Mongabay reports, it has become a haven for elephants, Bengal tigers and even a few rhinos.

Under the Paris Agreement, countries have agreed to “conserve and enhance” forests and mobilise results-based payments for doing so. To succeed, initiatives will need to offer forest-dwellers sustainable livelihoods that do not depend on slash-and-burn.

Kinder Morgan, developer of the controversial Trans-Mountain oil pipeline in Canada, is the latest major company to take heat from shareholders over its climate impact.

A majority of investors voted at last week’s AGM to demand the company justify its role in a safe climate future.

Like similar shareholder resolutions passed at Exxon Mobil, Shell and BP, the proposal hinged on the minimum goal of the Paris Agreement: holding global warming to 2C.

As the world moves towards a low carbon economy, does it really need more fossil fuel infrastructure? Crucially for financiers, will those investments pay off or become stranded?

The Kinder Morgan vote is another drag on a project facing strong opposition from indigenous groups whose territory the proposed pipeline crosses.

In countries where governments are unable or unwilling to regulate big oil, organised shareholders are checking the industry’s short-termist impulses.

Many westerners are ditching our diets and opting for a plant-based lifestyle.

Those choosing to adopt a vegan diet has increased over 600% in the United States in three years, and vegetarianism is up 350% and 400% in the UK and Portugal in the past decade.

Figures range between 6-32% for how much livestock contributes to greenhouse gases, but the UN Food and Agriculture Organization puts it at 14.5%.

Countries have committed to limit the amount of greenhouse gases emitted by human activity to the same levels that trees, soil and oceans can absorb naturally under the Paris Agreement.

With some studies suggesting that going vegetarian “can cut your carbon footprint in half,” the movement to a plant-based lifestyle may just be the best food trend so far.

Can our cities be turned into huge energy farms?

Windows and pavements cover much of the built environment. But how do you create a solar panel that can both absorb light and let it through?

A new technology called organic semiconductors could be the solution, according to a recent article on the Conversation, as it may be possible to design panels that are flexible, lightweight, colored or completely transparent.

Meanwhile in Scotland, researchers at Glasgow Caledonian University have invented a tile that can generate power when exposed to sunlight. The success of the solar pavement will depend on how it performs during tests at the 2022 World Cup in Qatar.

Under the Paris Agreement, 140 countries have included a push towards expanding renewable energy as part of their Nationally Determined Contributions (NDCs), with 75 including it as a focus area.

But one of the biggest challenges is overcoming how to store the variable electricity it produces.

Current battery solutions are difficult and too expensive to build on a scale that fits the needs of national power grids – with the notable exception of Tesla’s super cell in South Australia. A further worry is availability of lithium, the base chemical for many of today’s batteries.

Researchers at Stanford University in the US have developed a battery that runs on saltwater, allowing excess energy to be stored in a cheap and safe way, and then used when there are higher demands for power.

Lead researcher Yi Cui said all they had done was create a salt and water solution, “dropped in an electrode, and created a reversible chemical reaction that stores electrons in the form of hydrogen gas”.

In 2014, Ioane Teitiota had a bid for refugee status based on the climate threat to his Kiribati homeland rejected by New Zealand’s courts.

Teitiota’s claim had no basis in law, they decided. Climate refugees slip through a gap in the UN refugee convention, which focuses on human persecution rather than environmental threat. Its founders probably never imagined a global climate crisis that could displace millions.

Last year, a newly-elected New Zealand government said it planned to amend that by implementing a special climate refugee visa. It is consulting with Pacific countries – who say they don’t want to consider contingencies that include abandoning their islands – about how the policy can be introduced. But this could become a model that gets around the fact that, under international law, climate refugees do not exist.

Before the Paris deal was signed, green bonds – which raise money for environmentally beneficial projects – were a drop in the bucket. In total, $37bn worth of these bonds were issued in 2014.

In 2016, the leaders of the world’s biggest 20 economies committed to growing green bonds as part of the G20 leadership statement. It shined a huge light into a little corner of the financial world.

This, combined with the Paris deal, has convinced investors governments are committed to action on climate change and are ready to back it with cash.

Melbourne, Australia has become the latest city to consider a car-free overhaul of its public spaces, setting out to reduce air and noise pollution by drawing inspiration from Barcelona’s ‘superblocks’.

The number of car-free places in cities is expanding and several countries have committed to banning diesel cars within the next few decades.

Similarly to Barcelona, the Australian city is mapped out like a grid. The redesigned superblocks prioritise cycling and walking, with cars and public transport banned from the centre, instead travelling around the perimeter.

Along with carbon reductions come health benefits. In Vitoria Gasteiz, a city north-west of Barcelona, a superblock in the city centre led to a 38% reduction in particle pollution.