Sign up to our newsletter list to receive our weekly climate briefing throughout the year, with extra updates from key events 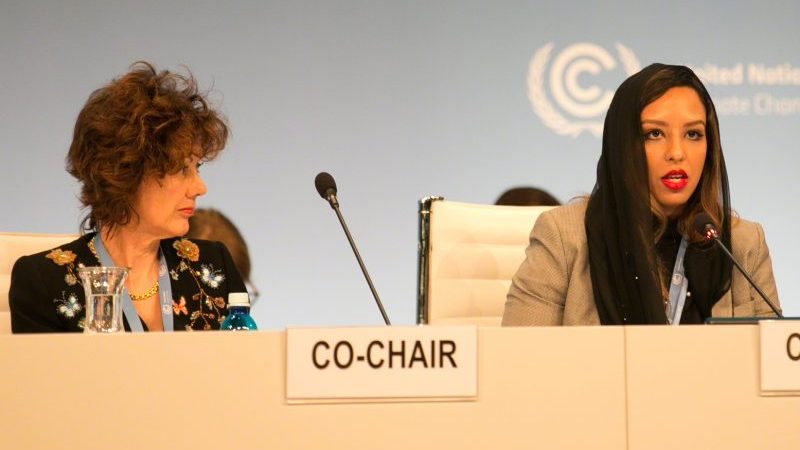 Jo Tyndall and Sarah Baashan, co-chairs of negotiations on the Paris Agreement rulebook (Pic: IISD/ENB|Kiara Worth)

Climate talks in Bonn limped over the finish line on Thursday, leaving much to do before the critical Katowice summit in December.

The old firewall between rich and poor countries refuses to be extinguished, to the EU’s dismay. That and a lack of progress on climate finance have put a drag on the writing of a rulebook for the Paris climate deal.

Negotiators are looking to ministers to ease political tensions and co-chairs to wade through a mass of technical submissions, with seven months to the rulebook deadline. An extra session scheduled for Bangkok in September has a lot of ground to cover.

Remember at the start of this fortnight, the World Resources Institute’s Yamide Dagnet wrote countries need to have a negotiating text by the time they leave Bonn? Or at minimum a mandate to the co-chairs to produce one before Bangkok. A negotiator Climate Home News spoke to agreed.

Well, in fact they emerged with vaguer directions to the co-chairs to produce “tools… including proposals for streamlining the outcome” – not a negotiating text.

That did not stop Dagnet’s boss, Paula Caballero, declaring negotiators “kept up a good pace this week”, in quotes circulated to media.

Perhaps CHN is splitting hairs here, but at this stage, such procedural distinctions are the most objective gauge of progress we have. Even UN climate chief Patricia Espinosa only described the outcome as “satisfactory”. Let’s not sugarcoat it.

It will take some heavy editing to tease out the issues that need political attention from a mountain of informal notes.

One of the co-chairs responsible for the task, New Zealand’s Jo Tyndall, said the complexity of the material meant that even after the next meeting in Bangkok, having a text ministers could engage with was “quite ambitious”.

“It’s wrong to think ministers should engage in technical details,” she said.

Even in this technical phase, the behaviour of negotiators – constructive or obstructive – signposts political battles to come. As usual, finance flows from rich to poorer countries look to be a key sticking point – specifically, talks on making climate aid more predictable.

“The issue of finance underpins so many different parts of climate negotiations, because poor countries simply can’t cover the triple costs of loss and damage, adaptation and mitigation on their own,” said Harjeet Singh of Action Aid. Developed country intransigence on the issue, he added, was “holding up the whole package”.

“The risk of gridlock at Cop24 is high,” agreed Tracy Carty, of Oxfam. “Developed countries need to get serious about the need to improve predictability of climate finance, and put new commitments to real money on the table by Cop24.”

It’s fundamental to trust, said Christian Aid’s Mohamed Adow: “The radio silence on money has sown fears among poor countries that their wealthier counterparts are not serious about honouring their promises.”

Donald Trump might want to pull the US out of the Paris Agreement, but its key American architects are keen to protect their hard work.

Todd Stern, in Bonn with WRI, told Reuters a strong rulebook for the pact was in the US’ interest. “I don’t want to see the Paris Agreement roll off the tracks,” said the Obama-era special envoy.

Another long-standing former state department official and senior member of the Obama team, Sue Biniaz, was also seen at the talks.

It’s a long way from being decided – Turkey and Italy are also in the running – but the newly announced UK bid to host UN climate talks in 2020 has got some positive reaction on social media.

It could be awkward timing though, noted E3G’s Jonathan Gaventa, coming just weeks before the end of the Brexit transition period.

UK talks would certainly save CHN some travel time, from our London base. But to really showcase the clean transition, we should head out of the capital to the likes of Hull, Sunderland or Aberdeen.

Any ideas from British readers? Any Turks, Italians or others want to make your case? Email [email protected] or tweet @climatemegan.

More organisations have expressed their commitment to a policy of gender balance when hosting events following Climate Home News analysis that male speakers outnumbered women two to one at UN climate talks in Bonn.

Becky Marshall, Chief of Staff at the World Resources Institute (WRI) said that the organisation made a “very conscious decision” to “proactively tackle” a lack of representation on panels, as well as within the WRI.

“When we looked at the total number of staff who had authored op-eds in 2016, we found that 75% of them were men, and in 2017, that number fell to 56%,” said Sophia Boehm, the WRI’s Communications Specialist. She says that this was a result of a more conscious effort to consider gender balance.

“Gender parity is very important for [us] and we mainstream it in our work,” said Ivetta Gerasimchuk of the International Institute for Sustainable Development (IISD), who moderated a panel in Bonn on Saturday with 5 women and 3 men.

On why it is important that there is gender parity at climate events, Gerasimchuk said: “it is my firm belief that the true transition away from fossil fuels is in the hands of women.”