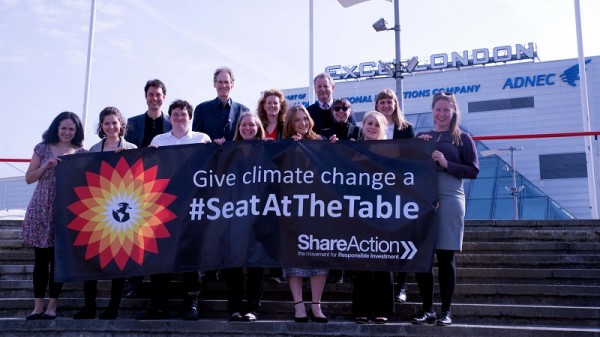 BP has agreed to reveal which of its oil reserves could be “unburnable” if governments place effective action on climate change, after a shareholder campaign.

At the oil major’s AGM in London, 98% of shareholders voted in favour of a resolution to test its resilience to climate action.

It comes after the £170 billion “Aiming for A” coalition of investors raised concerns that some of BP’s oil may have to stay in the ground as curbs on greenhouse gas emissions kick in.

The move will heighten scrutiny on BP’s high cost ventures such as the “Sunrise” tar sands project in Canada, which analysts warn could be stranded in a carbon-constrained future.

BP chairman Carl-Henric Svanberg said the company was “pleased to support” the resolution and “we need to play our role in the action on climate change”.

He played down the size of that role, however, noting that today 90% of oil production is by national companies – and 25% of global emissions are not from fossil fuels but land use.

Svanberg called for a price on carbon emissions, a switch from burning coal to gas in power generation, focus on energy efficiency and support for low carbon technology.

The company’s energy outlook forecasts levels of fossil fuel consumption in 2035 that will blow the carbon budget compatible with limiting global warming to 2C – the internationally agreed goal.

Even in the 2C scenario, Svanberg noted the International Energy Agency estimates more than half of energy will come from fossil fuel in 2050.

Today’s resolution will force the company to make explicit what difference that scenario makes to its future prospects.

Edward Mason, head of responsible investment at the Church Commissioners, a member of the “Aiming for A” coalition, hailed BP’s “unprecedented response”.

“BP’s commitment to increased disclosure on its climate change strategy will set a new standard and is a significant development in the relationship between institutional shareholders and the oil and gas industry on sustainability,” he said.

Shell has backed a similar resolution that will go to a vote at its AGM on 19 May.

CCLA’s Helen Wildsmith, who convened the “Aiming for A” coalition and led the engagement with BP, added this could be the start of a wave of shareholder resolutions.

“What we’ve experienced with BP and Shell indicates that supportive but stretching shareholder resolutions can play a positive stewardship role by amplifying the voice of long term investors,” she said.