Mark Rutte said Europe had a responsibility to align its targets with the Paris climate deal, joining the Swedes and French in pushing for sharper cuts 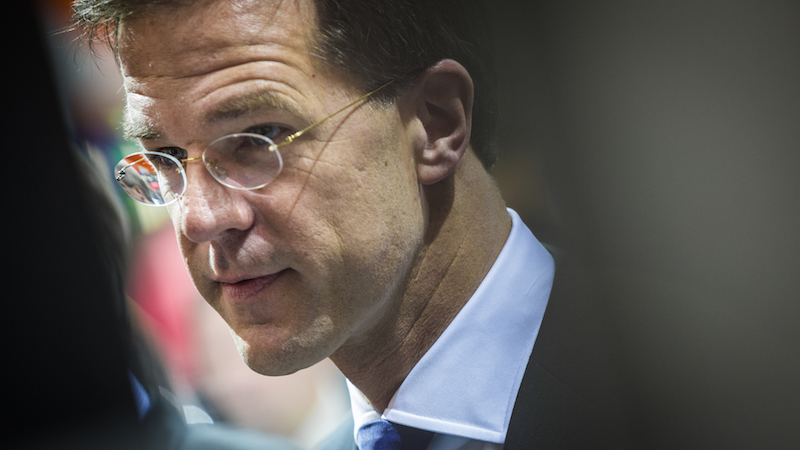 The Dutch prime minister has urged the EU to “raise the bar” on climate action by adopting a new emissions reduction target for 2030 of 55% below 1990 levels.

The high-profile intervention comes shortly after calls by Swedish and French ministers on the European Commission to commit to deeper, faster emissions cuts.

The 2015 Paris climate agreement formalised global goals to limit warming to “well below” 2C and ideally hold it to 1.5C. But Rutte said the EU’s current goals, set in 2014, were insufficient and needed to be updated.

“We need to raise the bar… This will show that we’re serious about the commitments we made in Paris. By adopting this target, the EU will be doing its share to get closer to the global ambition of keeping warming to 1.5C. So let’s not delay. The current commission could start making preparations. I’d like to see the June European Council approve this.”

EU targets are set through three-way negotiations between the European Commission, the parliament and the council of national governments. Broadly, climate ambition within Europe is subject to a contest between coal-reliant eastern member states and more green-minded western countries.

“The path ahead may be long,” said Rutte. “But one way or another we’re going to have to kick our addiction to fossil fuels. And make no mistake: most of us will live to see it. This is another area where Europe has a responsibility, and a job to do.”

Camilla Born, senior policy advisor at E3G, said Rutte’s speech “stands out and gives shape to an emerging coalition of countries” who are pushing the EU to raise its sights.

This vanguard includes Sweden. Climate minister Isabella Lövin met with EU climate commissioner Miguel Arias Cañete last month and said she had pushed for the EU to raise its ambition to become a net zero carbon emitter by 2050.

CHN asked the commission whether it was considering recommending a policy change and whether it agreed that the EU target had been outdated by the Paris deal.

Commission spokeswoman Anna-Kaisa Itkonen referred to a package of measures laid out by the commission in November 2016 aimed to meet the 40% emissions cut, which has not yet been adopted by the member states and parliament.
“The commission has made ambitious yet realistic proposals for the EU to reduce at least 40% of GHG emissions by 2030, which is our pledge to the Paris Agreement. These proposals are with the European co-legislators (member states and the European parliament) now and they might decide to go further,” said Itkonen.

Rutte’s speech coincided with a major speech on Brexit by British prime minister Theresa May. Rutte used the opportunity to draw a line between divisive and inclusive visions for Europe’s future.

“You had a choice today,” Rutte told an audience at the Bertelsmann Foundation. “You could have listened to a speech in the UK about a future without Europe. Or a speech in Berlin by someone who believes in Europe and wants to talk about the best way to move forward with Europe.”

Europeans had committed to working together, Rutte said, “because it is the only way we can respond effectively to global challenges like climate change, migration and the future of world trade”.

According to a transcript from the Spectator, May did not mention climate change, despite it being a major area of cooperation between the UK and EU.

The UK has long been seen as an advocate for ambition within EU climate policy. It’s current domestic 2030 emissions target is for a 57% cut.

Rutte’s latest governing coalition, when it was formed last year, promised to phase out coal power by 2030 and flagged its intention to push stronger ambition at EU level. It also laid out a domestic 2030 target of 49%.

In February, the government announced the development of a “national climate agreement”, which will lay out the path to reach that target.

At the same time, Rutte’s government is appealing a landmark court ruling. Campaign group Urgenda convinced a Dutch court that the country’s 2020 target was insufficient to deal with the threat climate change and sea level rise poses to the low-lying country. The government has to implement the court’s orders pending the outcome of the appeal.

Dennis van Berkel, legal counsel for Urgenda told Climate Home on Monday: “We welcome the speech by the prime minister and are looking forward to his actions to speed up the energy transition in the Netherlands.

“The 49% national target is independent from whether the EU raises its target for 2030. I assume that if the 55% EU targets gets adopted, the Dutch government will also have to step up its ambition for 2030,” he said.