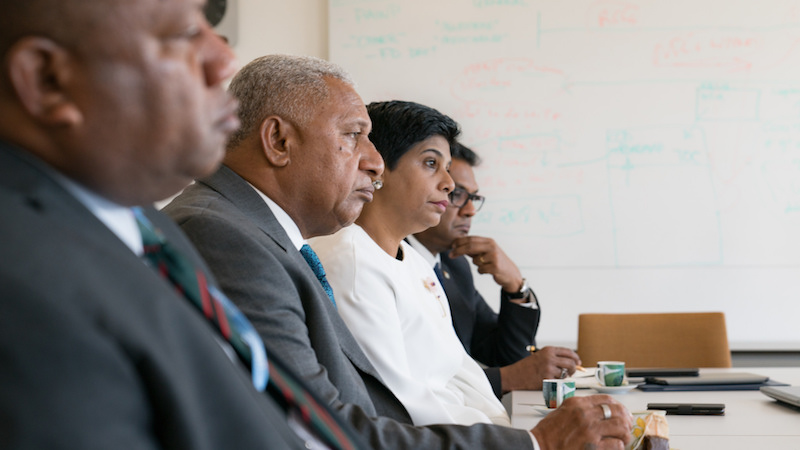 During a year of climate confrontation, the world has closed ranks around the Paris deal struck in 2015.

Momentum was “irreversible”, said a statement released by the German, French and Italian leaders in the hours after Donald Trump said he would leave or “renegotiate” the accord.

In the lead up to the annual UN talks in Bonn, which kick off on Monday, rhetoric from all nations has been uniform – confident, calm, defiant. Emmanuel Macron and Angela Merkel will attend the meeting in solidarity.

In an interview with Climate Home News, Nazhat Shameem Khan, the Fijian diplomat who will lead much of these talks, said the conference needed to rebut any notion that the vision of the agreement had dimmed.

But talk to the negotiators who built the deal and it becomes evident that the tumult in the US has created genuine apprehension among those who know this process best.

“The fragility of the political compromise of Paris has sometimes not been emphasised because we are all nervous. We want it to succeed and we’ve a lot invested in it, as parties, as citizens, as parents,” a senior negotiator said at an event in London last week.

“But there’s also a lot of nervousness that that package can unravel very quickly… We don’t really yet know what the US will do. They could act with benign neglect and disinterest. Or they could be very disruptive. Or they could be a little bit of a mixture of all of those things.” This point of view was confirmed by other diplomats Climate Home News spoke with.

The material of the talks in Bonn is technical – for many of the committees agreeing the only concrete outcome expected after two weeks is a contents page. But at the end, should all go to plan, the bodies that make up this meeting will have delivered dozens of decisions on the Paris Agreement, agreed by all parties, including the US.

That’s what has negotiators worried. This is a consensus body and to function it needs the US. Trump could utterly derail the talks if he chose.

There is every sign that things will go smoothly. As CHN reported on Wednesday, the state department team are old hands, set to maintain some continuity from the Obama era. Insiders say their involvement in lead up meetings has been muted, but, in the words of Khan, “constructive”. The delegate list shows they will send a significant team – 48 officials – to the talks.

The fear is that this fragile peace is just one fit of Oval Office pique away from shattering. The presence of California governor Jerry Brownand other leading Democrat politicians at the talks will be provocative. They claim to be neutering Trump with their own regulatory and technical advances at state and city level.

Diplomats and activists are briefing journalists against reporting on the expected positive US contributions at the talks. They are apprehensive that such reports could antagonise the US president or his fossil fuel-friendly acolytes and cause him to direct officials to obstruct progress in Bonn.

“You don’t want to wake the bear,” another senior negotiator said.

In that regard, last week’s report in the New York Times that, outside the formal negotiations, the US will use the meeting to promote fossil fuels as a climate solution could be soporific. The invitation of Peabody Energy, the world’s largest private coal company, into the heart of UN climate negotiations has already outraged many who will be in Bonn. It is a way for Trump to show how he is using the talks to push US interests.

Would it be raised with the US delegation in the talks? A Costa Rican expert said: “I think most would not dignify it by bringing it up. We have actual work to do, and I hope we can avoid getting distracted by the sideshow.”

On the opposite side of the climate divide from the powerful and recalcitrant US, another group disagrees with the view that the momentum built up around Paris deal is immutable – the multitudinous poor who will suffer the hardest edge of climate change. They believe they made enormous concessions when agreeing the Paris deal – allowing wealthy countries to weaken key passages of the final text for example.

Yet after all these concessions, they see a wealthy world and big polluters still wriggling away from their commitments. This is not limited to Trump’s US. Germany, the country hosting the talks, is going to miss its 2020 emissions reduction targets by a mile. This, in the words of the environment ministry, is “a disaster for Germany’s international reputation as a climate leader”.

“The truth is that no single party has raised ambition [in their pledge to the Paris deal] since 2012,” said the diplomat quoted earlier from London. Small countries were nearing a crossroads, the source added, at which they could decide the accord was not fit for purpose and disengage from the process.

The most recent UN Environment Programme Emissions Gap report found the promises made to the Paris deal remain just one third of what is necessary to keep the world below 2C. The less dangerous 1.5C goal remains over the horizon.

In a statement on Sunday, the UN climate body said the Fijian presidency expects countries to not only meet targets set for 2020, but raise their longer term pledges to the Paris deal over the next year. Indian officials launched a preemptive strike against this last week, flat-out rejecting any talk of increasing their ambition.

Such rancour sticks in the wheels like molasses. The real fear is not a reversal of the Paris deal, but a deceleration at a time when the planet and every major scientific institution says we need to go faster.