Farhana Yamin, a climate change lawyer with 30 years’ experience, breaks her silence about the impact of unwanted sexual attention, urging others to speak out 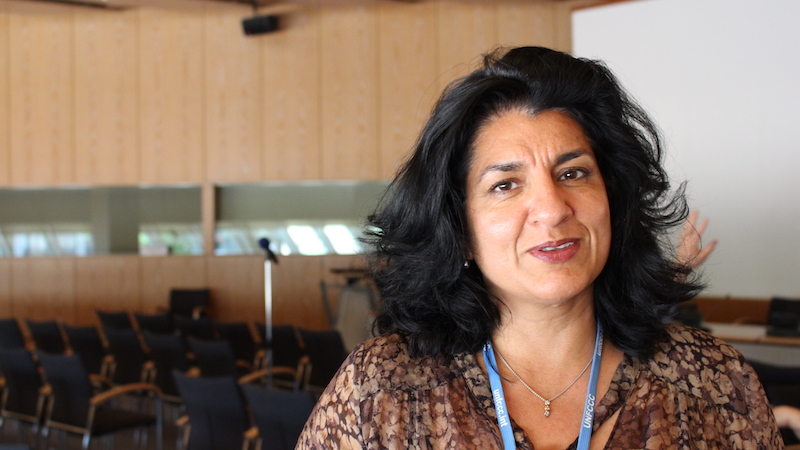 Farhana Yamin at Chatham House, where she is an associate fellow (Photo: Adopt A Negotiator)

The sexual harassment, assault and rape allegations raised by 60 women against Hollywood producer Harvey Weinstein have touched a nerve around the world. Women are speaking up, demanding investigations and calling for an end to abusive behavior. But what about the world of climate change negotiations?

I’ve been privy to many unaired and hushed conversations over the last three decades of my life as a climate change lawyer and know for a fact that many incidents have been brushed under the carpet.

I too have kept quiet about my share of painful experiences, especially as a young woman. These range from unwelcome comments on my appearance to being made to feel as though I had to choose between my dignity and my career.

Such incidents left me in a jumble of nerves or seething, sometimes both. Let me give two examples from the early 1990s.

At one meeting, a much older diplomat stopped me in the middle of a presentation to tell me I had beautiful eyes. His ‘compliment’ reduced me to a sexual object and undermined me professionally in front of colleagues.

On another occasion a senior delegate insisted I deliver his briefing notes to his hotel room late at night. It was long before the days we could ping documents over with a mobile phone.

In my twenties, on my own and in a foreign country, I had to figure out whether to put myself in danger or be written off as an incompetent or lax consultant. And – as many women in these situations do – I decided to deliver the notes because I did not want to compromise my professionalism.

When I handed him the notes, he invited me into his bedroom. I refused and suddenly the notes did not seem to interest him any more. He then ignored me for the rest of the negotiating session.

I did not raise his behaviour with anyone because I didn’t have any proof it was sexually motivated – although to me it seems clear. It would have been his word against mine, and he had the power to make or break my career.

Fortunately for me, I didn’t have to work with him again as I had the choice to switch delegation. Most women don’t have that choice. I have lost count of the number of times I exchanged a sympathetic eye-roll with a female delegate across a room over sexist behaviour, or comforted a distressed friend.

It is important to remember that during the early 1990s and 2000s the vast majority of delegates and almost all heads of delegation were (and are still) men. The resulting power imbalance within delegations makes it very intimidating for individual women to challenge sexism and abusive behaviour without risking their jobs.

This toxic background of harassment, discrimination and risk of reprisals for speaking up motivated the first climate-related gender decision taken by the seventh annual UN climate conference (Cop7) as part of the 2001 Marrakech Accords.

By that stage, I had 10 years of climate negotiations under my belt. But the pathway to senior posts seemed to be getting harder, not easier, and I had decided I would be better off in academia and research than the gender-insensitive climate regime.

Many other women were in a similar positions but wanted to stay in the climate regime and were being denied a chance to serve in senior positions, especially on the newly-created bodies. Some had been at the receiving end of abuse just for raising the idea of their nomination.

Under confidentiality rules, you are not supposed to divulge what goes on within a delegation to those outside it. That closeted atmosphere favoured the bullies and I only became aware of their harassment as a result of whispers and trusted relationships in the final week of Cop7.

Now aged 37 and with little to lose, I made an impassioned intervention from the floor about the decade of discrimination and abuse I had witnessed and how it was holding women back in climate change. I received a loud round of applause from women and many men.

My then head of delegation, ambassador Tulomi Slade from Samoa, who was also chair of the Alliance of Small Island States, encouraged me to draft a Cop decision to improve gender balance in the representation and participation of women. He managed to persuade the Moroccan presidency to incorporate this first ever, and in hindsight, rather innocuous looking Cop decision on gender, decision 26/CP.7, directly into the Marrakech Accords.

A second decision on gender and climate change, decision 23/CP.18, was adopted a decade later in 2012 in Doha with more fanfare and more robust provisions reviewing progress and broadening the discussion of gender issues to include equality and mainstreaming. That it took a decade shows again how difficult the going has been for women in the climate regime to be treated with respect.

I am now 52 and don’t get sexually propositioned. And I have to give credit to so many other women and men that so much progress has been made. We have more women on elected bodies (though it is nowhere near parity) and every Cop is now mandated to examine gender issues. Initiatives to empower women and support their leadership are taking root at every level, including supporting women working at the frontlines.

But the trivialization of women continues. Witness Canada’s climate change minister Catherine McKenna being called “climate Barbie”, a gendered slur of the kind not endured by her male counterparts. And this is to say nothing of the everyday sexism women continue to endure: from being constantly spoken over or ignored in meetings, assumed to be assistants, to being called bossy or overbearing for daring to voice opinions.

Has everyday sexism and sexual discrimination been banished from the negotiations as a result of Cop decisions? Are efforts to empower women to take part in negotiations taking into account the daily reality of women negotiators, especially our younger women who bear the brunt of harassment? What is being done to safeguard women, and importantly, to change the behavior of men? What trusted sources of advice and support exist if women are subjected to predatory behavior?

We have no idea how many sexual harassment and abuse cases are happening now and whether it’s more or less than before. Because apart from informal whisper networks that keep women safe, it largely goes unreported.

I think it is time for all of us, men and women, to do more than adopt policy decisions on gender. As a lawyer, I applaud the women who are taking their serious cases to courts and workplace grievance procedures. These actions require a lot of personal courage and financial resources.

In climate negotiations, there is an additional set of problems in that many instances of harassment are from men from other delegations or constituencies whose actions are not covered by any kind of workplace policy or legal process. And allegations of sexual misconduct might lead to a diplomatic incident if the parties concerned are from different countries – adding another pressure on victims to keep quiet.

On a personal front, as a first step I am urging women who have experience of harassment and abuse to share their experiences and help each other speak up. Men too must stop the culture of silence and trivialization which makes them complicit.

Beyond telling our stories, we need to create a safer environment for young women – and men – to participate and thrive in international negotiations.

I am working with Meera Ghani, a former negotiator, climate expert and friend, to consider how we can best do this. Email us at [email protected] on a confidential basis if you want to get involved.

Farhana Yamin is a climate change lawyer, writing in a personal capacity