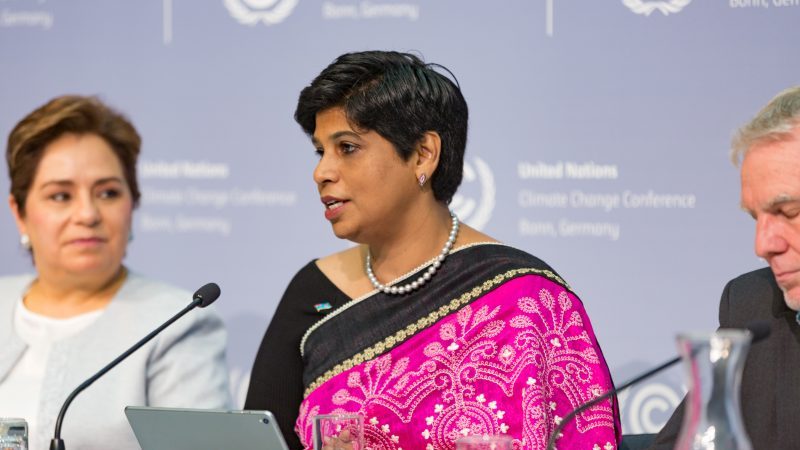 The next round of UN climate talks in November was expected to be a fairly technical meeting.

But during a year in which president Donald Trump vowed to pull the US out of the 2015 Paris Agreement, the diplomat who will preside over negotiations reconsidered.

Nazhat Shameem Khan, chief negotiator for Fiji, said she had received a message from countries around the world that the 23rd conference of the parties (COP) needed to be “visionary COP”.

“As the year wore on, it seemed necessary for the COP to restate the vision of Paris. Paris needs to work and we continue to believe in Paris,” she tells Climate Home by phone from Geneva, where she has represented Fiji at the UN since 2014. “Every single outcome from COP23 should be measured against its ability to deliver this vision.”

In Paris, 195 countries agreed to hold global warming “well below 2C” and aim for a 1.5C limit. The Fijian presidency exclusively refers to the tougher 1.5C threshold. This year’s summit, led by Fiji but held for practical reasons in Bonn, Germany, must show a collective determination to put that goal into action, Shameem Khan says.

China and the EU, both mooted as contenders to fill the leadership void left by the US, disagree over the way nations report their progress on cutting emissions. The EU is pushing for universal standards, while China argues that developing countries should be subject to lighter requirements. Shameem Khan says the meeting must bring the sides closer on this tense issue, ready to finalise a framework next year, or risk sending a signal “the world is divided”.

Another core task for COP23 will be designing next year’s “facilitative dialogue”, a political moment for assessing progress (or lack thereof) towards the Paris goals. “Do we need to enhance ambition? We do,” says Shameem Khan.

The Trump administration, representing the world’s second largest emitter of greenhouse gases, is pulling in the opposite direction. It is axing climate funds, reversing climate policies and promising to revive an ailing coal industry.

Under the rules of the Paris Agreement, the US cannot formally exit until 2020. In the meantime, the state department has indicated it will take part in climate talks to “protect ongoing US interests”. Trump is dangling the possibility of re-engaging on terms “more favourable” to the US – widely interpreted as backsliding on commitments made under Barack Obama.

It is a tough backdrop for the first Pacific island nation to preside over the annual summit – and Shameem Khan, a newcomer to the process. “We should be optimistic about the role that the US can play in discussions, whatever they decide to do finally,” she insists.

Every COP presidency uses buzzwords like “inclusive” and “trust”, sometimes linked to a specific cultural tradition. For South Africa, it was indaba. For Fiji, it is talanoa, a Pacific concept of informal storytelling that Shameem Khan says builds empathy and consensus for collective action.

Keeping 197 parties, from petropowers to penniless war zones, on a constructive footing is never easy. Trump’s “America first” stance will stretch talanoa to the limit. Pressed on how she can reconcile Trump’s position with the Paris vision of ratcheting up ambition, Shameem Khan lights on a provocative analogy.

“You can have a dialogue with somebody who is an axe murderer,” she says, swiftly adding that might be a bad example. “Please, let’s just talk. This is how embracing talanoa is.”

The Fijian government Shameem Khan represents is not always so tolerant. Three opposition lawmakers have been suspended for offences as trivial as calling a minister a “fool”. The editor and publisher of the Fiji Times are barred from leaving the country pending trial for sedition over a letter they published.

Prime minister Frank Bainimarama originally came to power in a 2006 bloodless coup, the fourth overthrow of government in two decades. The former navy chief cemented his leadership with an election in 2014, which international observers deemed credible.

Still, complaints of media suppression and human rights abuses crop up. Last year, Amnesty International reported a culture of police torture the government had failed to stamp out. Underlying tensions between indigenous Fijians and a sizeable ethnic Indian minority – to which Shameem Khan belongs – persist.

Shameem Khan’s role in the 2006 coup, as a high court judge at the time, is the most controversial episode of her career. Critics accuse her of legitimising the military intervention, which she denies. Rather, as the second most senior judge in the country at the time, she says she was honouring a prior agreement among the judiciary to keep the courts functioning through any such crisis.

Declining to comment on specific cases, Shameem Khan says: “I am actually very proud of Fiji’s human rights record. I think we have a very strong constitution… Education is now free for the first time in our history. These are enormous achievements, which many countries have not achieved yet.”

Our team will be watching everything, not just Donald Trump news! How to keep up? Sign up to Climate Home’s newsletter, Facebook and Twitter feeds for the most in-depth, dedicated reporting from this critical meeting.

The lawyer-turned-diplomat is at her most animated when talking about sexism. When she took a job, aged 22, in Fiji’s public prosecutions office, she recalls there were posters on the walls of scantily clad women draped over cars.

Shameem Khan had an uphill struggle to be taken seriously, becoming the first woman to direct that office and then Fiji’s first female high court judge. And she offered a hand up to the women behind her.

As director of public prosecutions, it meant revamping the recruitment process so no female applicant was asked about her marital status or family plans.

Fiji’s climate leadership: ‘We are all in the same canoe’

At the climate summit, she is championing the launch of a gender action plan. This, Shameem Khan is determined, will have influence over the core negotiations. “The worst thing about any new platform or plan is when it is tucked away in a corner and is just platitudes,” she says.

Just as women may find themselves talked over in meetings, Fiji – population 900,000 – can struggle to be heard in the great game of geopolitics. But when it comes to climate change, they speak from hard-earned experience. Their vulnerability to sea level rise, intensifying tropical storms and drinking water scarcity makes them authoritative advocates for higher ambition.

In Fiji, entire villages are moving to higher ground, beyond the reach of increasingly frequent coastal flooding. Pacific neighbours like the Marshall Islands, its highest point 10 metres above sea level, don’t have that option.

“We are going to bring to the negotiations the sense of urgency that the Pacific islands know,” says Shameem Khan. “People are really worried about the way things are going.”

Urgency means, Bainimarama said in his recent speech to the UN general assembly, fixing 1.5C as the upper limit on global warming. It’s an ambitious – and many scientists believe unattainable – goal; the mercury has already risen by 1C since the start of the industrial revolution.

At the same time, the presidency is responsible for brokering compromise between diverse interests. Its advocacy is necessarily tempered with pragmatism.

“We understand that the presidency is there for everybody,” says Shameem Khan. “We cannot put the Pacific over the priorities of any other region.”

Their approach to “loss and damage”, the strand of talks on impacts of climate change beyond what people can adapt to, is illustrative of the balance. It is a contentious issue, with vulnerable countries desperate for financial support but industrialised countries refusing to accept liability.

Bainimarama and Shameem Khan use their platform to highlight damage already caused to people’s lives and livelihoods by extreme weather linked to climate change. They trail the launch of an insurance initiative to help communities bounce back from such events. But they steer clear of more radical proposals from Pacific civil society to make polluters pay.

Keeping the Paris “vision” alive in the face of US regression will require all the technical nous and political savvy Shameem Khan can muster.

“This is quite an enormous undertaking,” she says. “I have not really come across anything quite as complex and all-embracing as this. I am totally aware of this enormous responsibility that Fiji has taken on.

“We cannot change the world on our own [but] in this exercise, we have an opportunity to work with the world on something that is important for all of us.”