The US panicked at the inclusion of a legally binding term in historic UN climate change pact, prompting last minute huddles 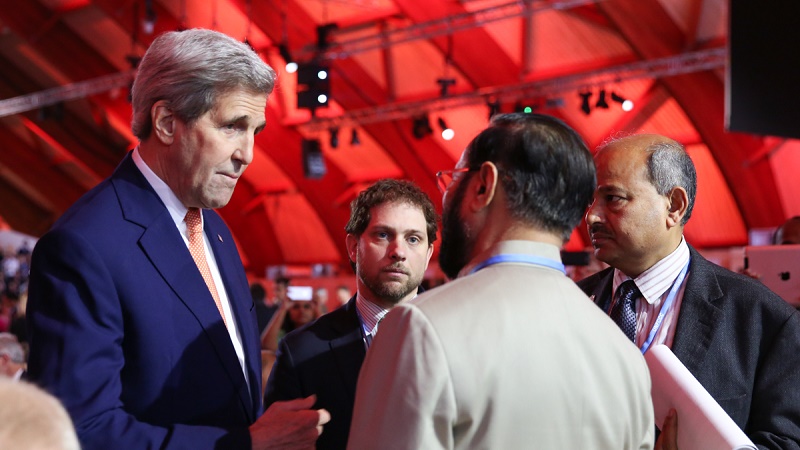 For over an hour on Saturday night, the Paris talks hung in the balance. At stake was US participation in a global agreement.

Screens beaming coverage of the main plenary to thousands of delegates outside were turned off, as what was billed as the coronation of a global climate deal rapidly turned sour.

The problem? One word: shall. The issue? Whether the US and other developed countries would be signing up to a UN treaty that would legally bind them to make specific greenhouse gas cuts.

That was always a US red line. Cross it and a hostile US Senate would have eaten the treaty for breakfast.

But a proposed UN deal delivered on Saturday morning contained just that, in Article 4.4, using the legally binding ‘shall’ instead of the looser ‘should’ when referring to developed country contributions.

“Developed country Parties shall continue taking the lead by undertaking economy-wide absolute emission reduction targets. Developing country Parties should continue enhancing their mitigation efforts, and are encouraged to move over time towards economy-wide emission reduction or limitation targets in the light of different national circumstances.”

The EU, Marshall Islands and other members of a so-called ‘Coalition of High Ambition’ had strolled in to cheers, wearing Pacific island sea grasses in their lapels.

But at UN talks, huddles of delegates are usually a sign that something is going wrong. And they started to form, small at first and then growing to 20, 30 strong.

Rumours spread that Nicaragua wanted to reopen the text and kick off in the main plenary. EU commissioner Miguel Arias Canete pleaded with its negotiating team “not to block it”.

Previous iterations of the text had used the word ‘should’, acceptable to the US. How ‘shall’ slipped in is still a mystery.

A UK official said it was a typo, a UN staffer agreed that it was a mistake. A senior State Department official described it as a “technical error”.

But it was in there – and developing countries spied an opportunity. The original UN convention from 1992 says developed countries must lead, so why was this any different?

As the clock ticked there were signs it was getting serious. US secretary of state John Kerry first spoke to China, then India, then Brazil.

To each the France and the UN explained a mistake had been made. ‘Shall’ had been a grave error by a tired ‘legal scrubber’ in the early hours.

Most, but not all, accepted their explanation. “It’s a typo we will refer to many times because frankly speaking, nobody’s buying that,” said Tosi Mpanu Mpanu, the DRC’s lead envoy.

“It was not a typo. Come on. When they do a drone attack and then say sorry – it’s a mistake. It was negotiated to the end. It was discussed late last night,” blasted Malaysian envoy Gurdial Singh.

Key to smoothing matters among developing countries was China. Once an implacable foe of the US in this arena, it now cooperates closely with Washington at the climate talks.

A senior EU official credited Beijing’s team with stepping in and resolving the issue, a story backed by a State Department official speaking at the back of the plenary late on Saturday,

Was it really a typo or did the US panic at the last moment? India chief negotiator Susheel Kumar laughed off the question on his way out. “Ask the [UN] Secretariat and ask Kerry,” he told Climate Home.

Indian environment minister Prakash Javadekar also smiled when asked what happened. “It was technical” he said, before showing an unusual turn of pace to accelerate away.

Singh was in little doubt what happened. “John Kerry walks in and says he doesn’t like it. And John Kerry gets what John Kerry wants,” he said.

Whatever the origin of the mistake – if it was a mistake – the outcome demonstrated how close China now is to the US that it was willing to bail it out.

And it showed how committed countries are to moving forward as one, said Michael Jacobs, a former advisor to UK prime minister Gordon Brown.

“In the end, as the leaders said everyone was committed. This could have been a terrible blow up, and the fact that it was resolved,” he said.

“In the end there was a group of countries to say we are the high ambition alliance… in the end everyone joined.”

One person whose blood pressure didn’t soar? Dan Reifsnyder, a State Department official who was co-chairing the UN talks this year.