Which countries are standing up to Trump on climate?

China, India, Mexico and Canada are among the global heavyweights to signal renewed support for climate action ahead of the new US administration’s first week in office 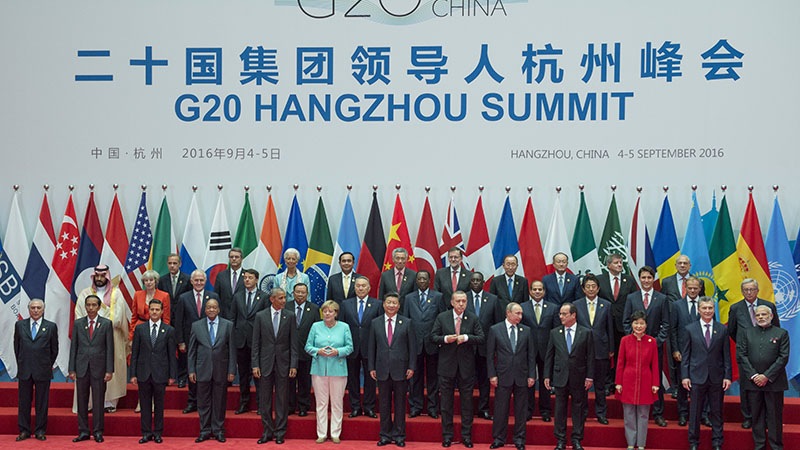 Secretary-General Ban Ki-moon poses for a group photo with world leaders taking part in the 2016 Summit of the G20 (Pic; UN Photos)

China, India and the EU are among the states and regional groupings to have sent incoming US president a strong message on the need to tackle climate change.

With less than 24 hours until the brash billionaire gets the keys to the White House, and a day after 2016 was officially declared the hottest year on record, fears are rising his cabinet of climate sceptics may carry through on threats to try and ‘cancel’ the UN’s new climate deal.

At last November’s climate summit in Marrakech 196 countries registered their support for the deal, but that appears to have had little impact on the incoming administration.

Paul Bledsoe, an independent US energy consultant who worked in the Clinton White House, told Climate Home fellow world leaders may be the only voices about to bring Trump to reason on this issue.

“I think global leaders have to tell Trump what an important issue this has become on the world economic and political stage,” he said.

“I don’t think he knows that… it’s incumbent on Merkel, May, Xi, Modi to say this is important. Global leaders have to start educating him.”

“We should adhere to multilateralism, honour promises and abide by rules, one should not select or bend rules as he sees fit,” president Xi Jinping told the World Economic Forum in Davos, Switzerland this week.

On Wednesday at UN headquarters in Geneva he went further: “The Paris Agreement is a milestone in the history of climate governance. We must ensure this endeavor is not derailed. All parties should work together to implement the Paris Agreement. China will continue to take steps to tackle climate change and fully honor its obligations.”

Nothing direct but prime minister Modi and his energy chief Piyush Goyal have banged the drum for the Paris Agreement and the country’s clean energy goals this week.

First here’s Modi at the launch of the Raisina Dialogue: “On the… pressing challenge of global warming, we have moved into a leading role. We have an ambitious agenda and an equally aggressive target to generate 175GW from renewables.

Then Goyal at the IRENA clean energy summit in Abu Dhabi at the start of this week: “Irrespective of what other countries do or do not do, India stands committed to being part of green energy,” he said.

Prime minister Justin Trudeau is walking a tight line, talking tough but also mooting a reverse ferret from Trump on the Keystone XL pipeline, which would help Canada export more oil from its tar sands fields in Alberta.

His environment minister Catherine McKenna has been in heavy-tweeting mode advertising a hoard of climate bilaterals on the sidelines of the World Economic Forum. Al Gore, Norway’s climate chief Vidar Helgesson, Unilever CEO Paul Polman and UN climate boss Patricia Espinosa were among those she met.

It is day two at #WEF2017. My key priorities ⬇️ pic.twitter.com/bZn5lVGw2V

Not a sniff of climate chatter from Theresa May in the past week, bar an oblique reference to clean energy in the context of the impending Brexit negotiations.

Her climate minister Nick Hurd has been a little more bullish – referring to the impact of Trump’s election as a “large rock chucked in a pool”.

“The Trump election is a challenge but there has been a clear gear change in global climate efforts,” Hurd told MPs at a hearing in Parliament.

Britain would “do what we can to influence others, and as the foreign secretary [Boris Johnson] makes clear, that includes the US administration,” he said.

Relations between chancellor Angela Merkel and Trump will start frosty, after the billionaire accused her of a “catastrophic” error on opening Europe’s doors to refugees and suggesting the EU was a creation to benefit Berlin.

Signs are she’s gearing up to defend global climate efforts, making it a pillar in the upcoming Hamburg G20 where carbon pricing will also feature.

Asked about Trump’s scepticism on climate change, Merkel had this to say last November: “Of course I’ll say that I believe that climate change is certainly caused by humans – and we’ll want to see if the position there develops.

Assailed by Trump throughout his campaign to be president and now facing an exodus of big business under his orders (and a bill for his wall), Mexico is on a sticky wicket.

But if we can expect little from Pena, his lawmakers are a tougher lot. This week they passed a resolution with South Korea, Indonesia and Fiji at the Asia-Pacific Parliamentary Forum urging countries to accelerate ratification of the Paris accord.

Riyadh’s rulers hardly count as climate champions, but this week the all-powerful oil minister signalled his multi-billion renewables plan is close to take-off.

The Saudis are looking for up to $50 billion in clean power investments over the next 6 years, said Khalid al-Falih.

Brazil? Claudio Angelo from Observatório do Clima emails to report a blanket of silence has descended on Sao Paulo and president Michael Temer.

“[Foreign minister] Serra did say before the election Trump would be a disaster, but has since recoiled. Right now, with a sequence of jail massacres and jailed CEOs threatening to drag him into jail, Temer has other concerns.”

“I’ve not heard anything from Zuma, he’s fighting other battles,” said a member of the South African climate delegation in an email to Climate Home.

If Trump thinks he’s having a hard time, he should call the seemingly doomed South African president, who stands accused of corruption and a woeful lack of progress on job creation.

Brussels was bullish on the Paris deal before Christmas, but has stayed quiet since. Off the record, European Commission officials say there’s no chance Trump will deflect the bloc’s 2030 climate and energy package, which is due to be finalised this year.

1 year ago, the world came together to tackle #climatechange. EU's commitment to the #ParisAgreement is irreversible and non-negotiable. https://t.co/kE5DAcfPFo

New secretary general Antonio Guterres has predictably labelled climate change as one of his priority issues and had linked environmental degradation to a spate of conflicts in Africa and the Middle East.

“They are exacerbated by climate change, population growth and the globalization of crime and terrorism. With so many factors at work, it takes very little to trigger a crisis that can engulf a country or a region, with global consequences.”

So far that’s all. The head of the UN’s climate body Patricia Espinosa – a veteran Mexican diplomat – has steered clear of talking about the US or Trump, sticking to her line that momentum is behind the UN on this issue.

“Where do I get optimism? The signals have been clear. Not only has the agreement entered into force, it’s now a legal obligation for us at the secretariat and to help countries to comply with their commitments… but every week we are getting new countries that are ratifying, so now we have over 125 ratifications,” she told media at the World Economic Forum.

“We recognise the many challenges lie ahead… but we believe the movement has started. Yes we need this movement to be going at a much faster pace. We need much more financing.”