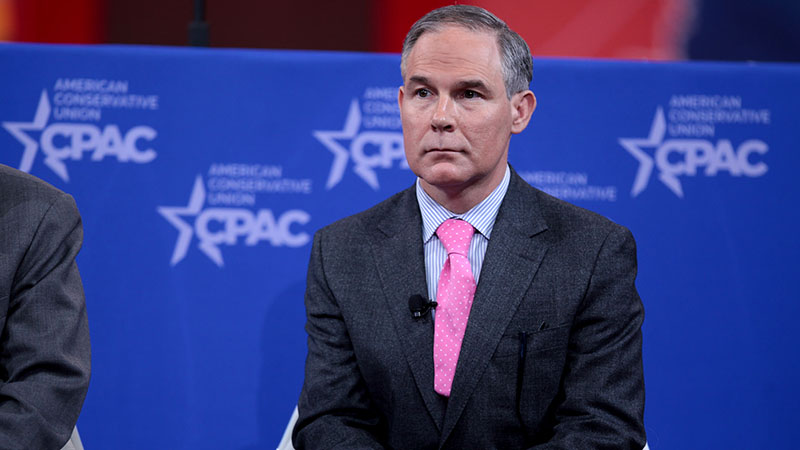 Hello. Welcome to our live coverage of Scott Pruitt’s appearance in front of the US Senate Environment and Public Works Committee.

Donald Trump’s pick to lead the EPA will be charged with imposing regulations that underpin the US’ future carbon reductions and it’s bilateral climate agreement with China.

Pruitt, as attorney general of Oklahoma, has harvested money from fossil fuel donors and in return pursued an aggressive line in anti-green legislation, including suing the agency he now pretends to lead. He has also gone on record repeatedly questioning climate science.

The hearing will begin at 3pmGMT/10amET. Watch it live on C-Span.

Send your comments to [email protected] or @karlmathiesen.

With the senators heading for their lunches, I will now close the blog.

Pruitt’s acceptance of the scientific consensus of climate change was most notably pressed by Bernie Sanders who established that Pruitt does not agree (or at least would not answer) that the energy system needs to be transformed to deal with the threat of climate change.

That is a step on from most of the questioning of Trump’s nominees so far and gets to the grist of how the Trump administration will govern.

On the Republican side, they almost unanimously attacked the EPA’s past overreach. Asking for assurances from Pruitt that he would rein it in. To which he happily replied in the affirmative.

Bernie Sanders (D-VT) opens by raising the prospect that Pruitt has been nominated in order to protect fossil fuel interests, not the environment. He then probes Pruitt’s assertion that the science surrounding human effects on the climate and the response are unsettled. After Pruitt casts doubt on climate science’s precision, Sanders goes on the offensive.

Sanders: “Why is the climate changing?”

Pruitt: “In response to the CO2 issue, the EPA Administrator is constrained by statutes…”

Pruitt: “My personal opinion is immaterial.”

Sanders (laughs): “Really? You are gonna be the head of the agency to protect the environment… Do you believe we have to transform our energy system?”

Pruitt: “I believe that the administrator has a very important role to perform in regulating CO2.”

Later Sanders tells Pruitt that he’s not going to get his vote. Although I’m not sure Pruitt had him in the for column.

Committee chair John Barrasso (R-WY) presents a letter to the committee sent by the Cornwall Alliance For the Stewardship of Creation. The committee, and particularly a climatologist called David Legates, praise Pruitt’s grasp of the science of climate change and willingness to listen to opinions. This group does not disclose its funding, but has lobbied against climate science and measures to restrict carbon emissions.

“There’s an idea in Washington that the states, those in Oklahoma or in Alaska or other parts of the country don’t care about the water we drink or the air we breathe. The farmers and rangers, those in industry in state in Oklahoma are very committed to that. When they have not been, we’ve taken enforcement action.”

This is astonishing. Pruitt, the doyen of state power, says he will review California’s application to set its own vehicle emissions standards. This is vital, California’s car market is the biggest in the US and it has special dispensation under the Clean Air Act to set its own standards.

California’s tendency has been to push more stringent standards and then drag the rest of the car industry along with it. Its denial by Pruitt would have big consequences for human health and carbon emissions.

But this is a really weak line of questioning. The Democrats are obsessed with the hoax line, which comes from a three year old tweet by Donald Trump. It’s easy to brush off, especially because Trump himself has disavowed the phrase.

It would be harder for Trump’s nominees to dodge questions that tackled their insistence that climate science is unsettled when it comes to how much humans are affecting the climate. It raises question over their own grasp of the science.

Markey: "Do you agree global warming is a hoax?"
Pruitt: "I do not agree."
Markey: "Something I think the president-elect should hear." pic.twitter.com/eRaUltOR1h

Jeff Merkley (D-OK) asks about a letter that Pruitt sent to the EPA pushing back against measures to control methane. The letter was 97% written by Devon Energy and then replicated on Pruitt’s letterhead.

“You used your office as a direct extension of an oil company rather than as an extension of the interest of the people of the state of Oklahoma,” said Merkley.

Pruitt responds: “The letter that was sent to the EPA was not sent on behalf of any one company… it was particular to an industry. The state of Oklahoma has an oil and gas industry that is vibrant to our state as you might imagine. There was concern expressed by that industry, many folks in that industry about the overestimating that had occurred with that methane rule… That was the communication to the EPA. It was the position of the state. Not the position of any one company.”

Not sure that clears it up.

Meanwhile another organisation piles into the Pruitt news cycle. Yale University has released a survey that found the number of Americans “very worried” about global warming has reached a record high (19%) since first measured in 2008. A majority of Americans (61%) say they are “very” or “somewhat” worried about the issue – nearly equal to the highest level recorded in 2008 (62%).

Asked by Ben Cardin (D- MD) whether there is a safe level of lead for a child’s body to absorb, Pruitt admits he doesn’t know. Which is fine because his scientists will surely tell him about that.

Contrast that with his earlier comments about climate change, in which he said scientists do not know.

Senator Sheldon Whitehouse (D-RI) attacks Pruitt’s much documented links with the fossil fuel industry. Pruitt says he can’t recall whether he has maxed out his donations from Murray Energy, Devon Energy and Koch Industries among others. He also says he never solicited money from them directly for his super PAC, but that he attended fundraisers.

Pruitt finishes the bracket by remarking that he has sued ExxonMobil for fraud over clean up efforts. Whitehouse retorts that that was not an environmental suit. Pruitt has been questioned with real venom by both Democrats so far.

Whitehouse whipped out giant chart depicting money flowing from fossil fuel companies to Scott Pruitt, then suggested he goes easy on them. pic.twitter.com/WdPHlgTBGN

My colleague Megan Darby has the story:

Now it’s official: the data is in and 2016 was 1.1C warmer than the pre-industrial average. And yes, the world’s top meteorologists agree this is what climate change looks like – with a boost from the El Nino effect.

Surely the timing isn’t coincidental and this is Noaa and Nasa’s way of sending a message to Pruitt and Trump? The New York Times certainly thinks so, using the moment to launch a tweetstorm on climate change.

Pruitt says his role as a regulator is to “keep things regular”. In other words to be consistent. He also says his primary aim was “being a good steward of the natural resources of our nation”. Note the emphasis on environment as a resource.

On climate change: Pruitt sticks to the same line as all other Trump nominees that have faced questions about climate change. “Science tells us that the climate is changing and that human activity in some manner impacts that change. The ability to measure with precision the degree and extent of that impact and what to do about it are subject to continuing debate and dialogue and well it should be.”

And surely we can expect more of this:

@johnupton @ClimateCentral it is VERY rowdy right outside the door

As is standard amid these hearings the chair and ranking member – from opposite parties – open with remarks. Chairman John Barrasso a Republican from Wyoming lauds Pruitt’s track record and character and says he is sure he is the right man to care for the country’s air and water.

Thomas Carper, a Democrat from Delaware, opens with a prayer to nature that nearly brings him to tears. Then asks Pruitt if he will uphold the values held within. “Much of your history suggests otherwise,” he says, before launching into a litany of environmental ruin that he says Pruitt needs to fix.

Arch-climate sceptic Jim Inhofe – of snowball on the senate floor fame – will offer his endorsement of Pruitt next.

Much has been written about Pruitt’s links with fossil fuel and other industrial clients, from whom he has accepted donations and then protected using his office. Here are three must-read stories:

But the relentless focus on these interests belies the importance of an ideological struggle that Pruitt articulates – the perennial tussle between American federal and state power.

This was one of the major themes of Trump’s rise to power. The EPA has become a hated symbol for “overreach”, particularly the clean power plan that Obama pushed through without the support of Congress.

Back in March 2016, when Trump’s locomotive was gathering steam, he said of the EPA: “We’re going to have little tidbits left but we’re going to get most of it out.” This was an appeal to a widespread feeling that Washington should stay in Washington.

Fox columnist Charles Krauthammer said in December: “The fact is, we don’t care if the guy believes that the moon is made of green cheese. His job is to administer, that means to carry out the law as passed by Congress. The complaint of the right, of conservatives, about this administration, it is absolutely trampling the idea of administrators as interpreting the law. They make it up.”