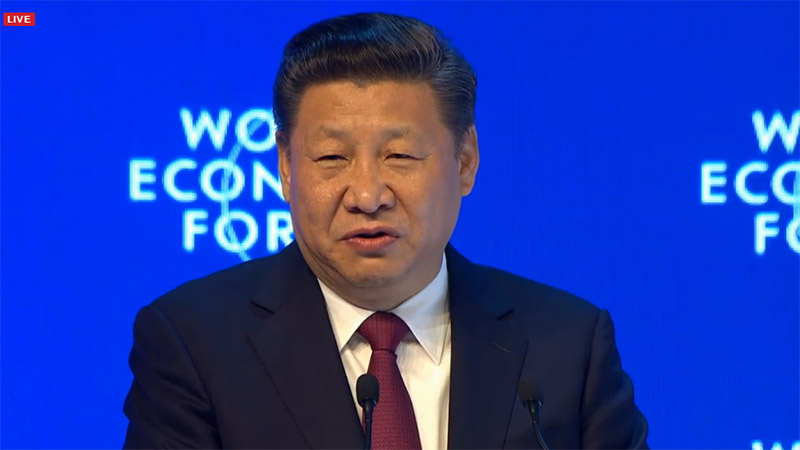 If Donald Trump has any doubts over China’s commitment to the Paris climate deal, these should now be extinguished.

In what felt like a geopolitical shift, China president Xi Jinping delivered a stern defence of the UN pact to limit greenhouse gas emissions at the World Economic Forum in Davos, Switzerland.

“We should adhere to multilateralism, honour promises and abide by rules, one should not select or bend rules as he sees fit,” said Xi.

“The Paris Agreement is a hard-won agreement… all signatories should stick to it instead of walking away – it is a responsibility we must assume for future generations.”

Free trade, global cooperation and innovation formed the bedrock of Xi’s hour-long address, which received a warm ovation from the gathering of politicians and business leaders.

#Davos Xi has quoted Dickens and Red Cross while challenging Trump on climate and trade. Feels like a moment. #wef17

During his campaign for president Trump frequently said he would stand up to China and reverse the trade deficit between the two countries, which he blames for a loss of US manufacturing jobs.

Not once did the Chinese president mention the US, but his emphasis on the need for countries to “keep their door open and keep the playing field level” was clear.

“We should not develop the habit of retreating to harbour when we encounter a storm, because this will not get us to other side of the ocean,” Xi added, urging countries to drop protectionist measures.

The leader of the world’s second largest economy and top carbon polluter also indicated his support for clean energy, saying China’s efforts to pursue green growth were paying off.

The speech marked a significant shift in China’s rhetoric on the Paris climate deal said Li Shuo, an analyst with Greenpeace East Asia.

“As president-elect Trump drops President Obama’s climate legacy, Mr Xi might well establish one of his own. 2017 presents a real opportunity for China to rise to the challenge of responsible climate leadership,” he said.

“Having moved from climate laggard to a cautious leader in five short years over the first half of this decade, it’s reasonable to expect China to become a true leader by its end.”

Xi’s speech was the highlight in a calibrated series of interventions by Chinese officials on climate change with less than three days to go until Trump’s inauguration.

The Obama administration put in the legwork to get China on board with climate action… https://t.co/q7PH3HKdA7

“China’s firm attitude to engage in global climate change actions will inject confidence amid a rising division between pro-globalization and anti-globalization,” he said.

Separately Qiao Baoping, CEO of China Guodian Corporation – one of the country’s top five energy producers – said its long term investment trends would take it away from coal.

“We have to make a big push and increase investment in renewables and clean energy,” he told a panel at the WEF.

Last week, China’s top energy regulator ordered the cancellation of more than 100 coal power projects in 11 provinces, in line with a pledge to curb 150 gigawatts of coal power by 2020.

“This shows the government is keeping its promise in curbing supplies of coal power,” Frank Yu, a coal consultant with Wood Mackenzie, told Reuters.