UK to engage with Trump on climate, says minister

Nick Hurd tells lawmakers London will seek to influence US on climate policy, says momentum is with Paris Agreement and low carbon economy 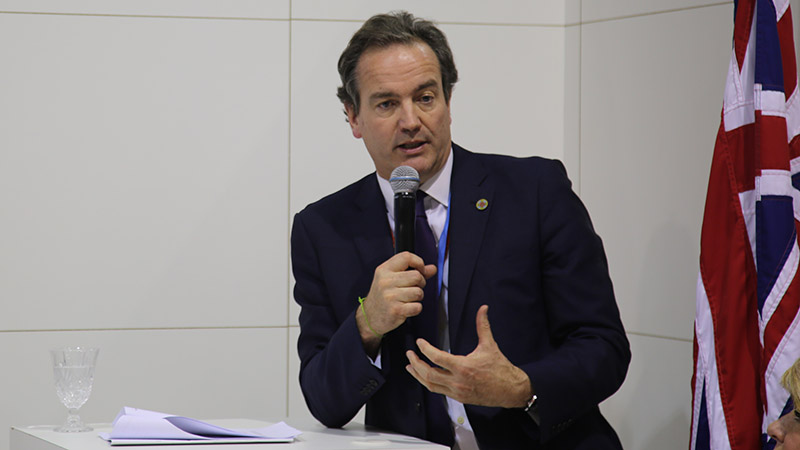 The UK will try to convince the incoming US administration that it should take climate change seriously, climate minister Nick Hurd said on Tuesday.

“The Trump election is a challenge but there has been a clear gear change in global climate efforts,” Hurd told MPs at a hearing in Parliament.

Britain would “do what we can to influence others, and as the foreign secretary [Boris Johnson] makes clear, that includes the US administration,” he said.

During the campaign for the presidency Donald Trump said he would “cancel” the UN’s new climate pact, and has since chosen a number of climate deniers for senior positions in his cabinet.

But Hurd warned against making early assumptions on what the president-elect might do next, in what he described as an “opaque” situation.

“I don’t know what they will do, only those in his intimate circle know, and there’s obviously some risk,” he said. “When we see the reality of plans then the international community will respond.”

Lead UK climate negotiator Archie Young said the UK would “speak truth” to the US. “As friends we will obviously hope to cooperate,” he added.

Hurd described the Trump election as a “very large rock chucked in a pool” but said talks with China, India and Brazil among other emerging economies convinced him the Paris deal would survive.

“[The UN COP22 summit] could have just gone into hysterics but the work went on, and that sent a message this is a serious process that has a pressing timetable,” he said.

“On China – they have pragmatic reasons for doing this and very serious issues at home, along with risks of food and water security. They are clearly in and signalled that immediately.”

Praising the Obama administration for its leadership on securing the Paris deal, a pact on potent gases called HFCs and another on aviation emissions, Hurd added others may now have to lead.

“Think of long distance bicycle races in Olympics – we are seeing the formation of a large peloton.

“The mood music is completely different… there is trust, momentum and sense of ambition but what we are dealing with is complicated… rules and frameowork – but that’s because people are being held to account for what they said they would do.”

“The importance of the Paris Agreement is it doesn’t just talk about 2C it talks about 1.5C and if you tot up the NDCs [national climate plans] the assessment is you don’t get to 2C let alone 1.5C. We are heading towards a different conversation on ambition and our view is that conversation has to have good underpinning evidence.”

“Frankly we have done a lot of the easy stuff, now we have the tough nuts to crack like heat, transport, CCS [carbon capture and storage]… we will have an emissions reduction plan by the end of Q1 [this year].”

Hurd outlined four questions that need answering as part of the Brexit talks:

-Do we negotiate on international climate issues as part of EU or the UK?
-Do we bind the UK into regulation on how EU fulfils Paris obligations?
-Do we participate in the EU emissions trading scheme?
-What happens to existing laws under the repeal bill?