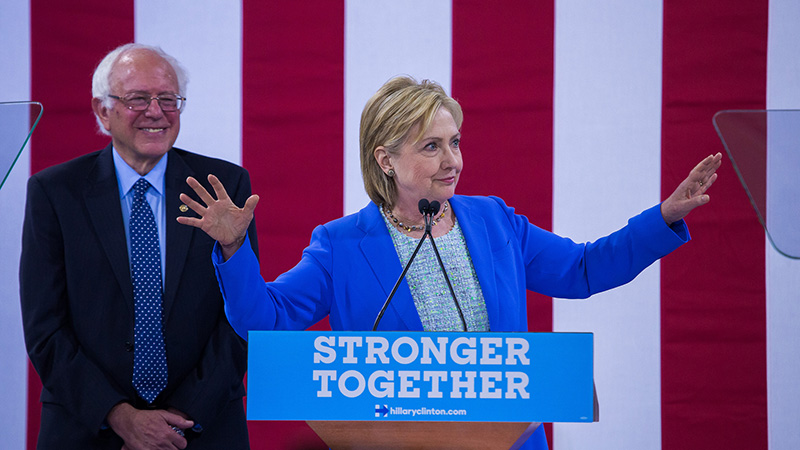 Hillary Clinton’s campaign team seem to think so, judging by the raft of low carbon policies they proposed this week.

The manifesto includes tougher rules for fracking and pipelines, incentives for wind and solar plus a carbon tax – a package that won the endorsement of 350 founder Bill McKibben.

As green groups flock to the Clinton presidential ticket, fossil fuel lobby groups are backing Trump. If elected, Trump would be the only world head of state to reject the scientific consensus on climate change.

Worth noting, not all analysts reckon climate will be a big issue. Andy Revkin at the New York Times says now Sanders has backed Clinton she may tone down her green pitch.

Across the pond the UK’s new government under prime minister Theresa May is bedding in, charged with negotiating a swift and painless exit from the European Union.

May’s new chief of staff Nick Timothy is no friend of climate policies, having described the 2008 Climate Change Act as “monstrous” self-harm.

His boss is harder to read, although top UK climate adviser Lord Deben told Climate Home this week she is quietly committed to meeting the country’s carbon targets.

But there was little cheer for green groups on Thursday, with news the climate department was being closed and merged with business in a new ministry run by Greg Clark .

Meanwhile in Brazil, the House of Representatives unanimously voted through a decision to ratify the Paris climate deal. Next up are the Senate and President.

Canada’s tar sands are the “single most destructive project on earth” environmentalist Tzeporah Berman told Climate Home in an interview published this week.

Berman has been part of a unique dialogue between green groups and oil companies which has resulted in the latter accepting greenhouse gas emission limits.

Bridging that divide is not easy. Witness how Berman this week apologised on her Facebook page for referencing Tolkein’s land of evil and fire, to appease an outraged oil lobby.

Read more on: US | Hillary Clinton US