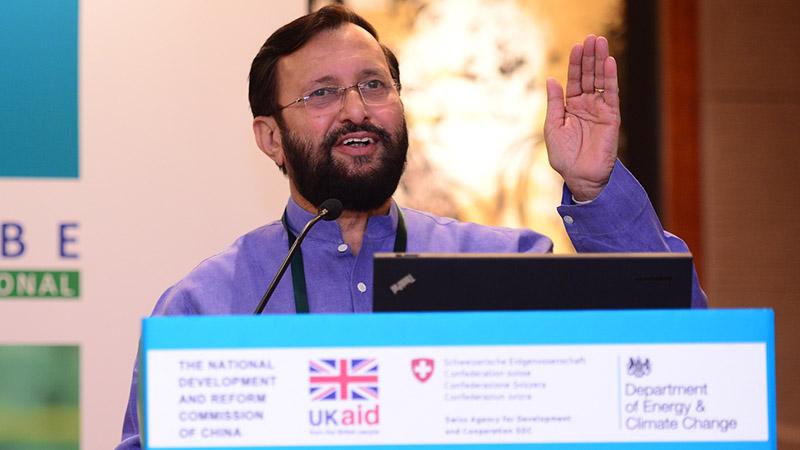 India could meet its carbon reduction goals earlier than expected, the country’s outgoing climate minister told a meeting in Delhi on Tuesday.

By 2030, the world’s fourth largest greenhouse gas emitter plans to cut the carbon intensity of GDP up to 35% on 2005 levels and boost the share of clean power in the energy mix to 40%.

Those ambitious goals helped deliver a new global pact to limit warming to below 2C said Prakash Javadekar, who suggested India could overachieve on its pledge.

“I’m sure all sectors will also contribute to adopt the sustainable development track and achieve the INDCs [climate plans]… even much earlier than what we have promised and that’s the way forward,” he said.

The comments tally with those of energy minister Piyush Goyal, who has predicted the country will easily meet a goal of 100 gigawatts of solar by 2022 amid crashing prices for solar panels.

Recently appointed to the cabinet as minister for human resource development, Javadekar ran India’s negotiations at the 2015 Paris summit, where a new UN climate pact was agreed.

Previously notorious for blocking efforts to impose tougher carbon cuts on developing countries at UN meetings, the minister said he instructed his team in Paris not to slow progress.

“Without India it would not have been possible to arrive at a consensus,” he said. “We will not say oppose, we say propose, and with that one change the whole attitude of the negotiations changed.”

Javadekar did admit coal will “still be a mainstay” of India’s energy production for some time to come, but stressed a coal tax rise was a sign the government was trying to reduce its use.

According to analysts at Bloomberg, India’s planned coal investments could treble its emissions by 2040, threatening UN global warming targets.