London: Fronting up to a global pollution battle

Candidates for upcoming mayoral election appear to agree the environment will be a vote-winner in May’s election, with potentially global ramifications 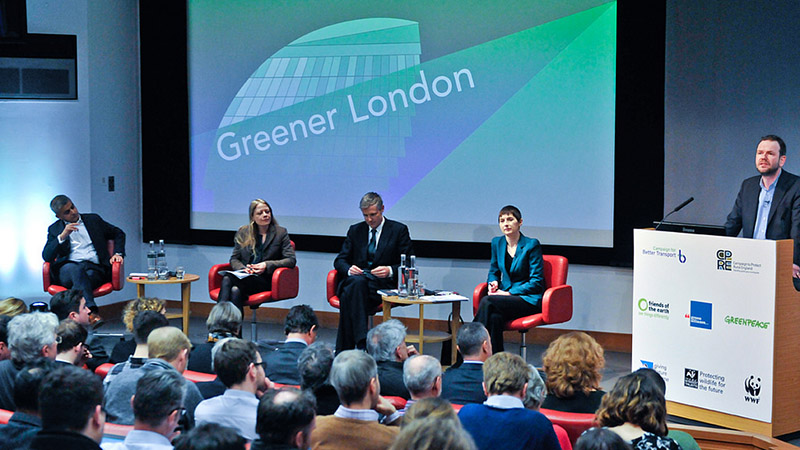 You know there’s something up when the quality of air filtration systems in schools makes it onto an election manifesto.

Welcome to London 2016. A global city suffering from a universal problem: Pollution.

It’s hard to imagine as you stroll along Oxford Street, which boasts some of the worst air quality in the world, but this city of 8.5 million could be on the cusp of a green revolution when it goes to the polls on 5 May to elect a new mayor.

Crime, education, health and transport have historically dominated previous election campaigns, but this year you can add a fifth element to the mix: the environment.

Air pollution can seem someone else’s problem until you’re walking your two-year-old to nursery and a Range Rover’s gleaming twin exhausts chuff a cloud of black smoke in her face.

Diesel fumes are mostly invisible, but the tasty aroma laced with cancer-linked PM 2.5 particles is one reason why 9,500 Londoners died prematurely in 2010.

Residents in the UK capital seem to be slowly waking up to the dangers posed by poor air quality. Most would accept a monthly one-day car ban, according to pollsters YouGov.

That awareness seems to be matched by the leading candidates for mayor, who took part in a hustings organised by the Green Alliance NGO last Friday.

“When they are in the playground they are breathing in poison,” said Conservative MP and mayoral hopeful Zac Goldsmith of kids who go to school near main roads.

Labour’s candidate and bookies favourite Sadiq Khan said he would get “radical” on pollution if elected, the Liberal Democrats Caroline Pidgeon said she backed a hike in the congestion charge.

According to a briefing note distributed ahead of the meeting, 328,000 children attend schools in Britain’s capital where nitrogen dioxide levels breach limits.

Key culprits include two icons of the capital’s roads: around 20,000 black cabs and 8,000 red buses (along with the rather less memorable 60,000 private hire vehicles).

Polluting versions face the chop if any of this lot are voted in. All committed to try and phase out diesel cabs and private hire vehicles by 2020, perhaps by converting some to LPG.

All seemed to support transitioning the bus fleet to cleaner forms of fuel by 2025, although only Pidgeon and the Green Party’s Sian Berry clearly voiced their commitment to that deadline.

And it’s here where it gets interesting. London’s mayor has limited powers, but Pidgeon and Khan raised the prospect of a leader working with other cities to reduce the costs of transition.

Khan spoke of a harnessing the power of Delhi, Paris and Beijing to focus on the production one or two models of bus that they could all buy at low cost.

The son of a bus driver, he wants to extend the city’s Ultra Low Emission Zone (ULEZ) ahead of 2020, and spoke of demarcating “clean bus corridors” along previously smoggy routes.

Report: How will London’s economy cope with climate change?

Now laugh all you like about London’s overcast skies, but the city does have the potential to produce 20% of the electricity it consumes from the sun, according to a February report from Greenpeace.

Swinging cuts to solar incentives have damaged industry confidence in the UK, but all candidates back plan to hit the 20% target by 2025, requiring the installation of panels on 200,000 rooftops.

“It’s not a big ask to say we can ramp it up tenfold,” said Goldsmith. “We can do this without difficulty,” said Khan.

Berry from the Greens said she backed a goal of 30% by 2030, Pidgeon called for a “London feed-in tariff” to boost deployment of renewables.

Welcome to the nitty gritty of action on climate change. This is where the Paris agreement becomes reality, amid discussions over renewables, waste disposal, cycling, loft insulation and greener parks.

The ‘c’ word was barely mentioned in nearly two hours of debate, nor did it feature in the opening pages of a booklet distributed to the audience.

But what a London mayor with an annual budget of around £17 billion does can have global ramifications for efforts to stem the growth of greenhouse gases.

And at a local level, curbing the use of polluting cars, investing in renewables and creating more green spaces (which can mitigate the impacts of heavy rainfalls) all have positive benefits for the UK and in offering road for others to follow.

It’s still fairly novel for the environment to take this profile. The hustings was only the second time candidates to be London’s mayor have taken part in an event like this, said the Green Alliance’s head of politics Alastair Harper.

Evidently satisfied with the breadth and depth of discussions, he suggested this demonstrated the importance this issue holds as the capital head towards May’s vote.

“We think what London does matters,” he added. “And if London gets active, and creates the world’s largest solar farm – well – that creates competition.”