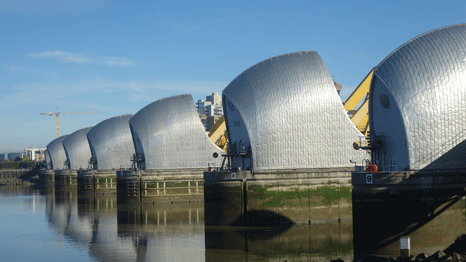 London is currently a city under siege from high tides and heavy rain, forcing authorities to raise the gates of the Thames Barrier for the 11th time in 11 days.

Built in 1984, the barrier, which protects key historical and political landmarks in London from flooding, has only closed 138 times for flood defence purposes since it was completed in 1984.

Over two thirds of these closures have taken place since 2000. The last 11 days have been one of its toughest tests yet.

While the Thames Barrier will come under increasing strain as sea levels rise, the Environment Agency says that it will remain effective for another 50 years before serious changes are required – longer than was thought at the time it was built.

“Obviously sea level rise is a concern, but the engineering of the structure was so good in the 80s that, although originally it was thought it would need to be upgraded by around 2035, analysis a few years ago that suggests the barrier will be fit for purpose to about 2070, taking into account climate change and sea level rise,” a spokesperson told RTCC.

As storms sweep through the UK, the Thames’ main flood defence has sprung into action to protect the London’s floodplain from going under water. The Environment Agency has released a map showing how far flooding could reach if the Thames Barrier was not in place. 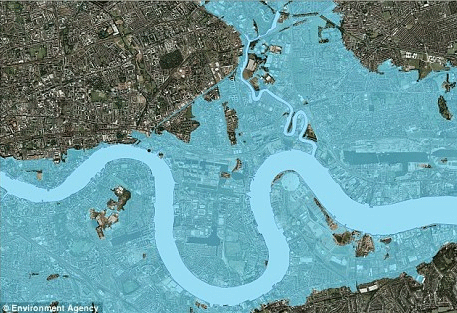 The barrier was closed just four times in the 1980s, compared to 80 times since 2000. In January 2003, it closed for fourteen days in a row. It was built in response to extreme flooding in 1953, which came within centimetres of breaching the city’s existing defences at the time.

Sea levels have been rising at a rate of 2.8mm per year since 1993, according to the UN’s scientific report, the IPCC. This is due to the melting of the glaciers and the Antarctic ice sheet, and the expansion of the ocean as it heats up. Since 1901, the sea has risen by 19cm.

The Environment Agency’s current plans to protect London against flooding are based on projections of a 2.7m maximum water level – including extreme sea level rise plus surge – as the worst case scenario. This is a revision downwards from its previous worst case scenario of 4.2m.

Roland Gryzbek, the water and environment framework manager at Halcrow, the engineering firm that manages the Thames Barrier told RTCC: “If you look at rising sea levels and the frequency and the size of the events we’ve had more recently then, yes, it will come into more frequent use, but it’s currently very good at what it does.

Climate change adaptation is a growing topic of conversation, as it becomes clear that mitigation efforts, which try to cut the emissions of greenhouse gases, are failing. This means that the world will have to prepare itself for the impacts of climate change, of which rising sea levels and more intense storms are just one particularly relevant example.

In November, the European Commission launched a €9 million programme called Helix Climate (High End Climate Impacts and Extremes), bringing together sixteen organisations to undertake a rigorous four-year analysis of what the world might look like with 2, 4 and 6C of warming.

This will help governments draw together plans on how they will adapt their countries to the challenges of climate change, drawing on the varying scenarios that will be faced across different continents.

The research will contain “a lot of new science”, according to Richard Betts of the University of Exeter, one of the collaborators in the project. It will link up isolated studies of what the world will look like in the future in a way that hasn’t previously been done.

“The way we’re framing it in terms of different levels of global warming, policy makers like to see things in those very clear and simple numbers,” he told RTCC.

He added: “The world isn’t always adapted to its current climate. There’s always a lot more we can do to be more resilient to weather and climate on all timescales. It is important we understand what we can do in adapting to climate change and also if there are any constraints or limits on that.”

There will be no major changes to the Thames Barrier before 2070, according to a plan laid out by the Environment Agency in November 2012, although “some modification” will be required for it to continue to protect the 1.25 million people who live and work in London’s floodplain.

“Many improvements are already in train,” said a spokesperson.

After 2035, London’s flood defences will have to be upgraded, says the report, and rising sea levels may mean another flood barrier defence will be built downstream at Long Reach, which would become operational by around 2070.

Even further into the future, the Environment Agency is considering putting locks on the Thames Barrier after 2135 to deal with the higher tides.

This is a claim that Halcrow’s Gryzbek disputes. He says: “On the basis of the predictions that’s not true, but we’re talking about a piece of engineering that is looking to protect London in 2070 and well beyond – in fact to 2100. With the predictions of climate change, there’s a norm and then there are extremes up or down relative to that norm.”