No country was left untouched by the shifting climate and energy geopolitical plates in the last 12 months. Here’s our roundup. 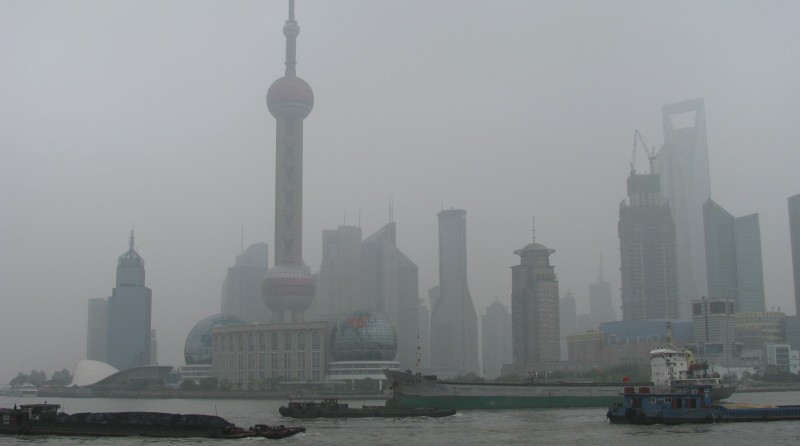 Choking smog, warming seas and crashing oil prices dominated 2015, a year that may go down in history as the moment when governments started to take climate change seriously.

It’s a little early to pass judgement on the Paris climate agreement – it’s not due to take effect until 2020, and we may only see if ‘ambition’ increases by 2025.

But it was a deal of its time, signed off on the crest of wave of intense politics, extreme weather and geopolitical shifts not seen for decades.

These are my top 10 stories of 2015. It’s by no means a comprehensive review (and yes, I missed out the Pope) but collectively I think they sum up why this has been such a dramatic year.

Smog is not a new problem in China. But it’s one the vast population seems unwilling to accept any longer. A documentary focused on air pollution narrated by Chinese journalist Chai Jing, called ‘Under the Dome’, received nearly 200 million views before it was wiped from China’s internet by the government. “I was right in the middle of it, and I didn’t even notice it, but the sensation in my throat remained,” she says.

Some estimate around 4,000 people die in China every day as a result of air pollution. And the government is taking action, tightening its coal cap, announcing a greenhouse gas emissions peak in 2030 and rolling out a national carbon market in 2017. Will that resolve hold amid falling economic growth? That’s a big question for 2016.

How can such a small number offer so much hope? For years vulnerable countries had battled to get all governments at the UN to accept warming of 1.5C above pre industrial levels would leave some small islands submerged by rising seas, and exacerbate climate impacts in Africa, Asia and Latin America.

A brief history of the 1.5C target – from distraction to contender: https://t.co/NWgxriJQg1 pic.twitter.com/nKUBmRuUzi

For years they achieved nothing, and then came Paris. First 20, then 43, then 100, then the EU, US, Australia and Canada joined arms with the world’s poorest and said they would aim to limit warming to “well below” 2C and aim for 1.5C. In reality the lower number means a radical and unlikely cut in fossil fuel use. But the political message has been sent, and the ink has dried. The world’s poorest have found their voice – and they won’t let up.

Hitting ambitious climate goals is no longer simply a matter for the UN. A Dutch NGO called Urgenda took their government to court this year in protest at what they claimed were weak emission goals – and they won. District judges ruled in June that the Netherlands must target deeper greenhouse gas emissions cuts, in line with science presented by campaign group Urgenda. It’s not the end – how could it be? The case has gone to appeal. But similar actions are cropping up in Pakistan, Australia and beyond. Good news for lawyers, and perhaps the climate.

Once the preserve of students in the US and Europe, the divestment movement started to snaffle big business in 2015, with pledges to pull out of oil, gas and coal holdings topping $2 trillion. Coal, tar sands and other polluting assets in funds representing $3.4 trillion have been now flagged for divestment by over 500 institutions and individuals, according to campaigners.

A major highlight was Norway’s sovereign wealth fund pulling out of coal. The case for action was underlined by reports from Bank of England chief Mark Carney, HSBC, PwC and Citigroup warning fossil fuels could be seen as ‘stranded assets’ in a world that was cutting back on carbon pollution.

As oil prices plummeted and majors wrote off $200 billion of new projects, the bosses of BP, Total and Shell announced they wanted to play their role in a low(er) carbon future. Their goal, some cynics suggest, is to throw coal under the bus and ensure oil and gas fills the gap.

No matter. In October Total CEO Patrick Pouyanne unveiled a raft of new measures covering efficiency, reducing flaring and investigating carbon capture that were backed by a coalition including Saudi Aramco, Statoil, Pemex and ENI. Anthony Hobley from the Carbon Tracker think tank was not impressed. “What we wanted to see in here was concrete, quantitative and measurable targets or commitments to take action for the 2C transition. I can’t really see any of that.”

Decades after nuclear testing destroyed their livelihoods, the original inhabitants of Bikini Atoll in the Pacific are now looking for a new home. The reason? Rising sea levels linked to climate change. The two scraps of land they were moved to – Kili and Ejit – and now being steadily eroded by the sea.

But in an interesting twist – one which may set a precedent – the islanders are likely to be allowed to move to the US. It is “yet another indication” that impacts linked to rising greenhouse gas levels and a warming atmosphere are hitting vulnerable communities, Marshall Islands foreign minister Tony de Brum told media at a London briefing.

Once they were a powerful force, dominating the airwaves and directing presidents. That influence still holds, but the numbers of climate sceptics appears to be on the wane – if the Paris climate talks are any indication. A flagship event to examine the science around global warming attracted around 35 middle-aged, mostly white men, reported Climate Home’s Alex Pashley.

Still, they still talk tough. “You cannot possibly keep saying that the world is falling, the world is falling where everything is just going better, the life expectancy is getting longer and longer,” said Willie Soon, a Malaysian-born researcher at Harvard-Smithsonian Center for Astrophysics, who reportedly received $1.2 million from oil billionaires to write academic papers.

The oil-giant mounted some heroic blocking efforts at the Paris climate talks, but the walls are closing fast. In August the IMF warned high public spending and a reliance on oil threatened its economic health. “Directors noted that the sharp drop in oil revenues and continued expenditure growth would result in a very large fiscal deficit this year and over the medium term, eroding the fiscal buffers built up over the past decade,” said the IMF. It was a message underlined by those green-tinged radicals at McKinsey in December. “The country can no longer rely on oil revenue and public spending for growth, in the face of a changing global energy market,” said a new report. A huge PR drive in November stressing solar investments suggests there is a plan brewing – but one that’s so far well hidden.

The big story in 2016? It has to be the US presidential election. Hillary Clinton looks a banker for the Democrat nomination. The fight to be Republican candidate is fierce, with anyone from the Donald, Ted, Jeb and Marco a possible winner. Climate change could be a big moment come the final campaign. Team GOP seem resolutely opposed to any green measures, while Clinton has come out for tougher climate policies, notably calling for construction of the Keystone XL pipeline to be blocked weeks before President Barack Obama came to a decision. Her campaign manager? John Podesta. Architect of Obama’s climate plan. It should be some fight.

If 2015 was a year when coal and oil took a battering, it also offered some hope for the rapid expansion of renewables on a scale needed to replace fossil fuel use in the world’s major economies.

The US, China, India and Saudi Arabia were among a group pledging to ramp up investment in clean-tech R&D over the next five years, while a consortium of billionaires promised to use some of their cash to invest heavily in risky technologies, aiming to span what they term the “valley of death” facing new entrants into global energy markets. “Given the scale of the challenge, we need to be exploring many different paths—and that means we also need to invent new approaches,” said Microsoft founder Bill Gates, who will personally inject up to $2 billion.

You couldn’t make it up. After two weeks of intense talks and little sleep, the Paris climate pact was ready to be signed off. And then someone noticed a ‘typo’. The US said ‘shall’ had replaced ‘should’ in a sentence determining what efforts developed countries should take to tackle greenhouse gas emissions. 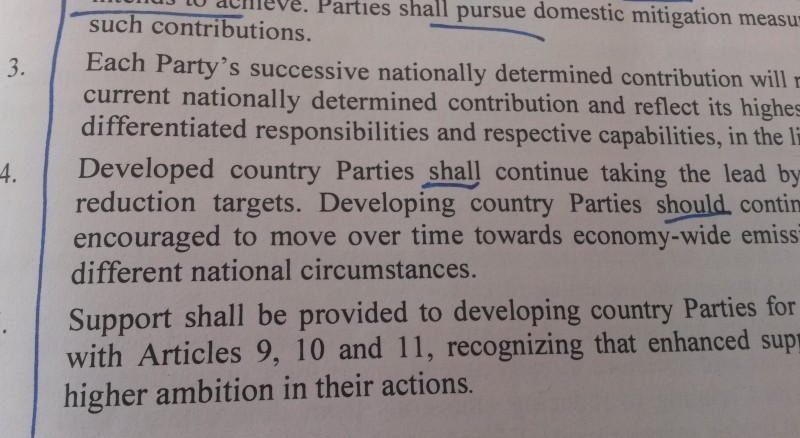 The former was legally binding and meant the Obama administration could/would not sign up, as a hostile Congress would be required to ratify the deal. Hours passed as diplomats wrangled over the word. Rumours suggest the Pope was involved. Obama, Xi and Modi may have spoken too. In the end US diplomatic power won over, the word was changed, the deal went through, and many wondered how one of the most potentially important agreements in history was nearly scuppered by a few letters.