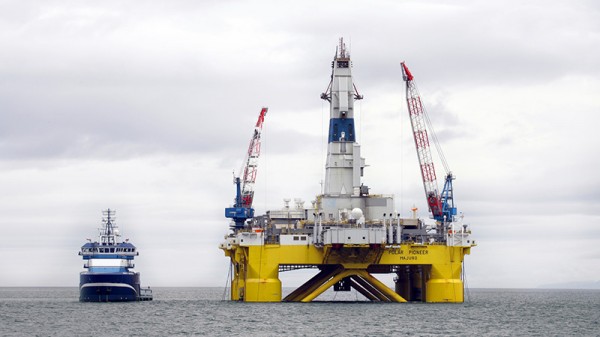 Shell has stopped drilling in the Arctic after test wells did not find enough oil and gas to make it worthwhile.

The oil major will not explore in the area off the coast of Alaska “for the foreseeable future,” it said in a statement.

Having already sunk US$7 billion into the controversial project, the company cited an uncertain regulatory environment and high costs in its decision.

US presidential hopeful Hillary Clinton has declared her opposition to drilling in the frozen north, describing the region as “a unique treasure”.

That sets her apart from president Barack Obama, who allowed Shell to go ahead.

On the economic side, falling oil prices have made the venture look less and less viable.

Scientists calculate a third of known oil reserves need to stay in the ground to limit global warming to 2C – the international goal.

Assuming that cheaper sources will be preferred, Arctic oil – which requires vast investment – should be unburnable, according to UCL’s Paul Ekins.

Earlier this month, it was reportedly ousted from the Prince of Wales Corporate Leaders Group – a network advocating climate action – over its continued enthusiasm for the project.

The Carbon Tracker Initiative, a think-tank that analyses the financial risks of dirty energy, said Shell needed to make a deeper strategy shift.

“Shell’s decision to halt exploration in the Arctic is a win for common sense and capital discipline, but why did it take $7bn of shareholders’ money to come to this view?” CEO Anthony Hobley asked.

“Analysis by Carbon Tracker and others clearly showed that Arctic oil needs much higher prices to give investors a decent return. Yet the decision appears a reluctant pause as Shell suggests it would have continued to drill if it had found more oil and gas…

“Shell still does not fully grasp either the need for real capital discipline or that the energy sector is undergoing fundamental technological transformation and it risks wasting billions more of shareholder money.”

The company is set to launch an “Energy Transitions Commission” in Texas on Monday, in a bid to green its image.

Hobley said the commission lacked credibility and was planning for a 4C future.

Green groups also hailed the latest development, which follows sustained pressure on Shell and the US government to halt Arctic exploration.

Greenpeace chief Kumi Naidoo described it as a “huge victory” for campaigners.

“This has become the most controversial oil project in the world, and despite its bluster Shell has been forced to walk away with nothing,” he said.

“If we are serious about dealing with climate change we will need to completely change our current way of thinking. Drilling in the melting Arctic is not compatible with this shift.”

Rod Downie, WWF polar programme manager, said: “Today the Arctic has seen a reprieve from Shell’s irresponsible drilling. Their reckless $7 billion pursuit of oil in this fragile icy habitat puts local people and wildlife, such as polar bears, at risk.

“Shell should now set out to concerned shareholders and the public how it intends to transition its business model to one which is compatible with tackling climate change.”

Shell is not the only oil company to have eyed up the northern polar region.

Russia’s Gazprom started exporting oil from the Arctic in April 2014, despite efforts by Greenpeace to block the shipment.

The previous year, 30 activists had been sent to a Russian jail for protesting at the Prirazlomnaya rig. The last of the group were released 100 days later, after diplomatic interventions.

A €5.6 billion (US$6.3bn) platform off the coast of Norway is set to start production in a few weeks, the Financial Times reports.

Owned by Italian company Eni and Norway’s Statoil, the Goliat project could need an oil price of US$80-90 a barrel to break even. At present, the price is less than $50.

As global warming melts the Arctic ice cap, more oil and mineral resources are expected to become accessible for extraction. Countries are jockeying for territory around the North Pole.