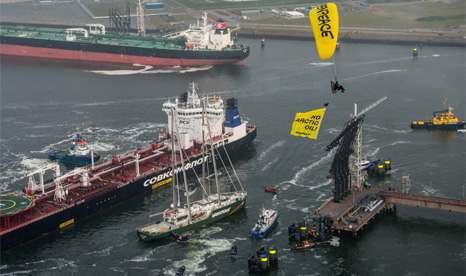 Over 40 Greenpeace activists have been arrested in Rotterdam protesting against the first delivery of oil extracted from offshore Arctic waters.

According to report from the NGO, Dutch security agents also took control of Greenpeace’s flagship Rainbow Warrior, which was trying to prevent Gazprom oil tanker Mikhail Ulyanov from docking.

The tanker is carrying 70,000 tonnes of crude oil extracted by the Prirazlomnaya oil rig, located in the Pechora Sea, 60 kilometers off the Russian coast.

French oil giant Total has bought this shipment, which it will distribute to European markets.

Environmental campaigners say drilling for oil in the Arctic poses huge risks to the biodiversity in the region, and poses a wider threat to global efforts to address climate change. 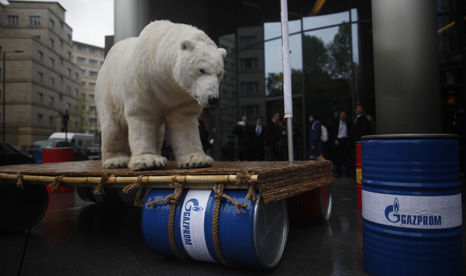 Analysts say the Arctic holds as much as 20% of the world’s undiscovered oil and gas reserves, which if burnt would release levels of greenhouse gases likely to warm the planet well beyond 2C, a temperature ceiling governments say they want to avoid.

“Arctic oil represents a dangerous new form of dependence on Russia’s state owned energy giants at the very moment when we should be breaking free of their influence,” he said.

“We cannot hope for any kind of ethical foreign policy while our governments remain hopelessly dependent on companies like BP, Shell and Gazprom.”

Last year 30 Greenpeace activists were jailed in Russia for 100 days after staging anti-drilling protests alongside the Prirazlomnaya oil rig. 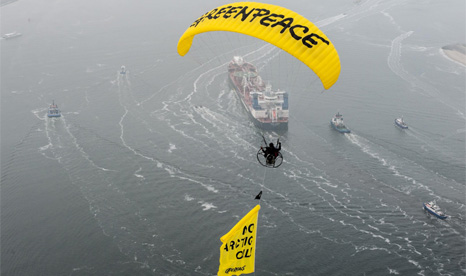 Gazprom claims its oil platform “fully excludes any oil spills during production, storage and loading processes”, and says it plans to pump out 71.96 million tonnes of oil.

According to the Russian oil giant, the “command to start oil loading” was given by Russian President Vladimir Putin two weeks ago.