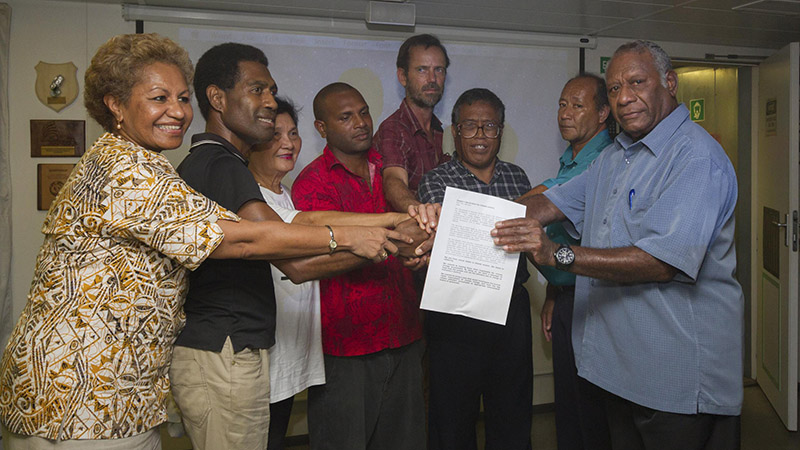 The world’s leading fossil fuel companies could be taken to court for damage caused by greenhouse gas emissions under plans released by a coalition of Pacific Island communities on Tuesday.

Their rationale was outlined in a statement released on Monday and backed by Vanuatu president Baldwin Lonsdale, along with community leaders from Tuvalu, Kiribati, Fiji and the Solomon Islands.

“We commit to holding those most responsible for climate change accountable. By doing so, we send a message of hope that the people and not the polluters are in charge of humanity’s destiny,” it says.

“We commit to bring a case that would investigate the human rights implications of climate change and hold the big carbon polluters accountable to appropriate international bodies or processes.”

Vanuatu president Baldwin Lonsdale said they would “stand united as affected communities in the face of climate change” and work together against its causes.

As part of this effort Greenpeace Southeast Asia will shortly petition the Philippine Commission on Human Rights to investigate the role of fossil fuel majors in violating the rights of island peoples due to their contribution to climate change.

The NGO’s legal advisor Zelda Soriano said there was a limited precedent, given the UN Human Rights Council has recognised climate change is impacting the rights of some communities.

“In this light, we view climate change as a social injustice that must be addressed by international governments and agencies, most especially those responsible for contributing to the climate crisis,” she said in an emailed statement.

The world’s top 12 fossil fuel giants pump are responsible for more fossil fuel emissions a year than the US, Japan and Russia combined, research from Thomson Reuters revealed in May.

But while companies have faced litigation in the past due to localised pollution and health hazards, proving links to climate change will likely be a more difficult prospect.

“The challenge is how you say one particular company is responsible for emissions that affect everybody,” Martijn Wilder, head of Global Environmental Markets at law firm Baker & McKenzie told RTCC in a recent interview.

“There’s a causation challenge. Having said that people have taken on tobacco companies saying you sold cigarettes and said it wasn’t harmful, and as a result of that have been sued.”

He added: “People are starting to sue pension funds for investing in these companies and not taking those risks into account, so we are going to see litigation and that will put more pressure on people to take action.”

In March this year Cyclone Pam damaged 90% of housing in Port Vila, Vanuatu’s capital, and wiped out crops and livestock the population relied on.

Speaking in its aftermath Lonsdale directly attributed the event to climate change, calling it a “monster” and urging progress on a UN emissions cutting pact set to be signed in December.

The UN’s Intergovernmental Panel on Climate Change has previously been wary of directly linking extreme weather events to global warming.

Its 2014 synthesis study found tropical storms would likely get more intense, but not necessarily more frequent.

More recent research published in May 2015 said tropical storms are becoming more violent but less common as temperatures rise, while a wider study from the UN Office for Disaster Risk Reduction said 70% of natural disasters could now be linked to climate change.

The bid is the latest from small island and climate vulnerable nations to seek reparations for damage linked to global warming.

Talks on a UN-run loss and damage mechanism are ongoing but so far have delivered little progress, with many developed nations fearing they could be landed with an unlimited bill for compensation.

Correction: The story has been amended to reflect the fact that the statement was not signed by Vanuatu president Baldwin Lonsdale as originally stated.