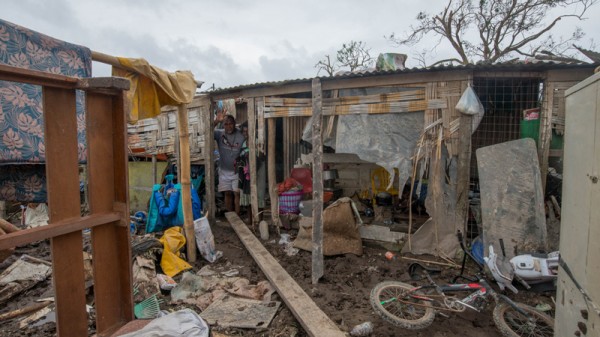 A resident surveys the damage in Vanuatu (Pic: UNICEF)

As Vanuatu counts the cost of Cyclone Pam, calls are mounting for compensation to countries most vulnerable to the impacts of climate change.

Oxfam reported at least 90% of housing in Vanuatu’s capital, Port Vila, is badly damaged by winds of up to 250km/h last Friday. The official death toll is six and expected to grow as information comes in from remote islands.

The category five storm has heightened attention on UN disaster risk reduction talks in Sendai, Japan, where negotiators aim to strike a deal on Wednesday.

Baldwin Lonsdale, president of Vanuatu, is at the talks, having been assured by early forecasts the cyclone was not heading for his country.

In an emotional address to delegates, Lonsdale described Pam as “a monster that has hit Vanuatu” and “wiped out” development.

He linked the country’s changing weather patterns to global warming.

“We see the level of sea rise… The cyclone seasons, the warm, the rain, all this is affected ,” he said.

“This year we have more than in any year … Yes, climate change is contributing to this.”

“It is time to act,” said Tong. “Let us match the rhetoric of these international gatherings with pledges and commitments as leaders to do our best to improve conditions and lives of those who need it most…

“For leaders of low-lying island atolls, the hazards of global warming affect our people in different ways, and it is a catastrophe that impinges on our rights… and our survival into the future.”

He urged delegates not to consider disaster risk reduction in isolation from climate change.

That directly threatens the survival of low-lying islands like Vanuatu and increases their vulnerability to storms.

The UN estimates 87% of natural disasters are linked to climate change. Patterns of flooding and drought are changing as well as major storms.

Ronny Jumeau, climate negotiator for the Seychelles, raised the contentious issue of compensation from historic polluters to those irreparably impacted by the changing climate.

Known as “loss and damage”, this is one of the big unresolved issues for climate negotiators aiming to strike a deal in Paris this December.

Jumeau tweeted: “How can you look at the pics of pain & devastation coming out of Vanuatu & not think #lossanddamage?”

How can you look at the pics of pain & devastation coming out of Vanuatu & not think #lossanddamage? #climatechange #adp2015 #Paris2015

It was not only island states raising the links between disaster risk and climate change in Sendai.

“I don’t think I would say climate change caused [Cyclone] Pam, but I would say the fact is in the past three or four years we’ve seen category fives coming with a regularity we’ve never seen before,” Kyte said.

“And that has some relationship with climate change.”

The sense of urgency and shared ambition in Sendai “is not at the right level,” she warned.

“It’s hugely ironic that this storm should hit Vanuatu while we are all here. If we truly care for those people, we have to respond…

“I think we have to hold ourselves accountable and at least voluntarily we should have targets.”

The disaster risk reduction talks are focused on providing practical advice to governments on improving resilience to natural disasters.

Countries have yet to agree an international framework to finance such measures, with some eyeing up the UN-backed Green Climate Fund, launched at the end of 2014 backed by $10 billion of government pledges.

In its latest Global Assessment Report, the UN estimates investment of US$6 billion in disaster risk management could avert US$360 billion worth of damage over the next 15 years.

Japan has announced US$4 billion over four years to support disaster-proofing infrastructure, global cooperation and training for officials.