Typhoons and hurricanes are getting less frequent with human-caused global warming but more intense, study confirms 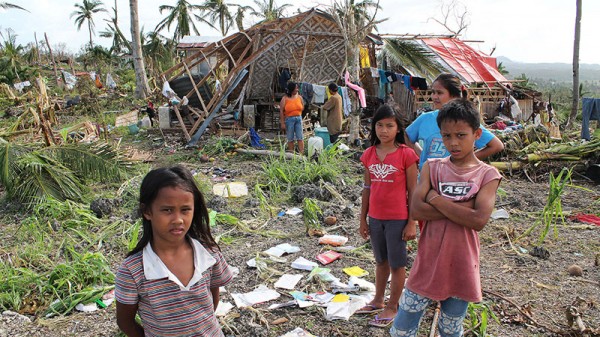 Children and the remains of their school after Typhoon Haiyan hit the Philippines in 2013 (Pic: EU Commission/Flickr)

Tropical storms are becoming more violent and less frequent as global temperatures rise, US and Korean researchers have found.

The conclusion is not new: other teams have already proposed that carbon dioxide from burning fossil fuels could drive tropical cyclones to higher latitudes and that the most destructive hurricanes could happen increasingly often.

Nam-Young Kang, who directs South Korea’s National Typhoon Center, and James Eisner, a geographer at Florida State University, set about a study of weather data and hurricane, cyclone and typhoon records between 1984 and 2012 to see if they could identify a pattern of change.

In the last 60 years or so, global average temperatures have risen, but are still less than 1C above the average for the centuries before the Industrial Revolution. Hurricanes are linked to sea surface temperatures and the hurricane “season” does not start until ocean surface levels go beyond 26C.

The two scientists reckoned that even slightly higher average temperatures would mean more energy and therefore higher wind speeds at sea as well. They report in Nature Climate Change that they found what they were looking for: a pattern. On average, storm wind speeds had increased by 1.3 metres a second and there were 6.1 fewer tropical storms a year worldwide than there would have been if land and water temperatures had remained constant.

The research paper describes tropical cyclones – a term that for geographers also embraces Pacific typhoons and Atlantic hurricanes – as “perhaps the least welcomed natural phenomena on our planet”. Even well-developed, highly complex societies are exposed to them, it points out. Superstorm Sandy, which began as an Atlantic hurricane, hit New York in 2012 with devastating consequences and even set the nation’s earthquake alarms ringing.

Eisner has already established a link between temperatures and tornado hazard.  The new study delivers a statistical warning of a trade-off between frequency and strength offshore as well.“We’re seeing fewer hurricanes, but the ones we do see are more intense. When one comes, all hell breaks loose,” he said.