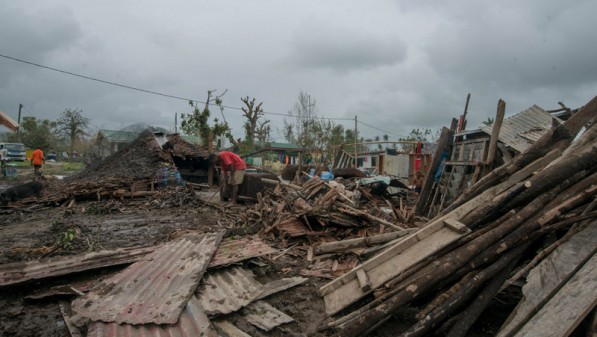 The Seychelles has called an emergency meeting of island states in New York to mobilise support for cyclone-hit Vanuatu.

In the wake of the category five Cyclone Pam, aid agencies are struggling to bring relief to all who need it across Vanuatu’s 80 islands.

For the alliance of small island developing states (AOSIS), the crisis underlines their vulnerability to the ravages of climate change – and the need for global action to slash emissions.

The cyclone “is a clear manifestation of climate change, which some persist to deny,” said Seychelles president James Michel.

“When will the international community wake up to reality and put our efforts and resources to get a binding agreement to reduce global warming and sustain the survival of our planet?”

Christopher Loeak, president of the Marshall Islands, joined Michel in offering “thoughts and prayers” to those hit by the storm.

“Climate change isn’t new to the Pacific region, but the dangers it poses are now spiraling out of control.  Never before has a category five storm hit Vanuatu,” said President Loeak.

“Without urgent and transformative action by the big polluters to reduce emissions and help us to build resilience, we are headed for a world of constant climate catastrophe.”

This message was backed up by Australia’s Climate Council, in the clearest statement yet by scientists linking Pam to greenhouse gas emissions.

“The damage caused by Cyclone Pam through widespread flooding was exacerbated by climate change,” wrote authors Tim Flannery and Will Steffen.

“Climate change is here with us today, raising the level of the ocean and increasing the devastation caused by tropical cyclones.”

Pacific Islands are “particularly vulnerable”, they added. Communities need to prepare for more extreme weather and tackle the cause of the problem by “rapidly reducing” fossil fuel emissions.

Meanwhile, disaster response teams are trying to deliver clean water and medical supplies to thousands made homeless by the storm.

An estimated 90% of buildings in Vanuatu’s capital Port Vila have been severely damaged. Unicef reports that more than 3,300 people are sheltering in emergency refuges and 5,000 have no access to clean water.

Tuvalu, the Solomon Islands and Kiribati have also been affected by the cyclone.

The Seychelles pledged US$100,000 towards relief efforts.

According to press reports, China is sending US$4.8 million worth of supplies. Australia has promised US$3.8 million, New Zealand $1.8 million, and the UK $3.0 million.

“Aid is essential but not enough,” she said. “We will be hypocrites if we continue to make their lives worse with more of the coal mines and exports that cause global warming.”

Australia is expected to miss its target to cut emissions 5% from 2000 levels by 2020, after prime minister Tony Abbott notoriously scrapped its main climate policy – a carbon tax – last year.

And it is developing massive new coal mines in Queensland’s Galilee Basin. Greenpeace estimates these would generate 705 million tonnes of CO2 a year at peak production – nearly double Australia’s emissions.

“As long as Australia continues to export coal and fails to reduce pollution,” said Milne, “we are directly contributing to the more severe extreme weather that threatens to wipe our island neighbours off the map.”

The US Agency for International Development (USAID) declined to put a dollar value on its support, only saying it had dispatched a team to Vanuatu.

This team will assess the damage and support the French Red Cross in distributing supplies, a spokesperson said.

Washington-based news service ClimateWire reported this week that Republican lawmakers are opposing a USAID request for US$348.5 million of funds towards climate change assistance.

Representative Ted Yoho said: “I just don’t think that’s what we need to be spending our money on… I’m on the opposite side of the climate issue.”

Others agreed it was not a priority for the aid budget.

Dana Rohrabacher, another Republican representative, dismissed as “baloney” the link between Cyclone Pam and climate change.

However, he did advocate for more aid to Vanuatu. “We should be very involved in helping people who are in emergency situations,” he said, “whereas trying to change the climate is a huge waste.”