200mph winds leave a trail of destruction in Tuvalu, Kiribati and the Solomon Islands, before skirting Vanuatu capital 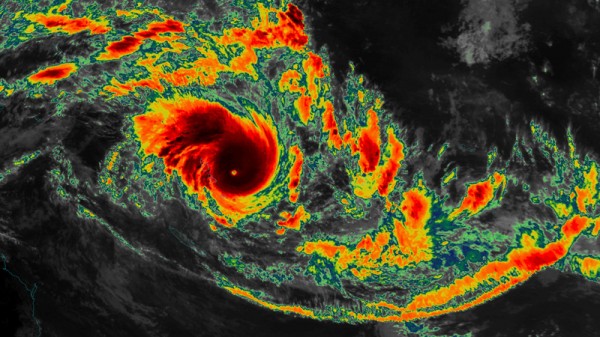 Vanuatu, Tuvalu, Kiribati and the Solomon Islands are reeling in the wake of Cyclone Pam, a category 5 tropical storm.

The eye of the storm passed within 35km of Vanuatu’s capital Port Vila at 12 noon GMT, or 11pm local time.

Bringing gusts of up to 200mph and torrential rain, Pam has caused flash floods and destroyed homes in parts of the Pacific islands. At the time of writing, no deaths had been reported.

Julian Heming, tropical prediction scientist at the Met Office, told RTCC the storm was almost as strong as Typhoon Haiyan, which devastated parts of the Philippines in 2013.

There are some indications climate change is increasing the peak intensity of tropical cyclones, Heming said, but it was too early to say whether they were getting more frequent.

His CARE colleague on the ground in Vanuatu, Inga Mepham, said there was “a real feeling of fear” as they waited for the storm to hit.

“Some schools and churches are made of cement or bricks, but the rest are very traditional housing made out of trees, sometimes tin roofing – thatched housing – so they’re not resilient,” Mepham said.

Pam hit the Pacific islands as negotiators travelled to Sendai, Japan, to strike an international agreement on disaster risk reduction.

Development charities urged countries to make sure the deal protects those most vulnerable.

Oxfam campaigner Ben Murphy blogged: “Over the last 30 years, not only has the number of weather-related disasters tripled, those natural hazard events have also affected more people and resulted in more economic losses, mostly in low to middle-income countries.

“Small island developing states, like those affected by Cyclone Pam, are expected to lose on average 20 times more than their total capital each year as a result of disasters.”

“That’s why a strong agreement in Sendai is so critical.”

In December, countries are set to strike a global climate deal in Paris.

Harmeling said: “It [Cyclone Pam] really reinforces the message how important it is to invest in disaster preparedness.

“I hope it gives an additional sense of urgency. We really need to have ambitious deals on disaster risk reduction and on climate change.”