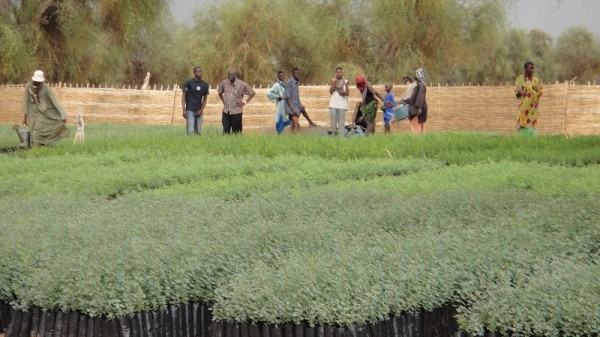 A tree nursery grows Acacia Senegalensis to be planted in the Louga region of Senegal (Pic: Elvis Paul Tangem)

Up to 920 people are thought to have perished when their overcrowded boat sank in the Mediterranean last week.

The most deadly of a series of migrant shipwrecks, it prompted soul-searching across Europe over the treatment of those seeking safety on their shores.

In Africa, meanwhile, the question is how to improve people’s prospects and security so they are not driven to such dangerous journeys.

With climate change likely to worsen drought, food insecurity and conflict in the Sahel region, efforts to green the desert can be part of the answer.

That is the hope of Elvis Paul Tangem, coordinator of the Great Green Wall Initiative – an ambitious programme of land restoration across a dozen countries – for the African Union.

“If you are following the news these days, you realise how many young people are dying in the Mediterranean,” he tells RTCC from Addis Ababa, Ethiopia.

“They are coming from the drylands of Africa, because they think their lands are barren and they cannot do anything with them. That is not true…

“We have a challenge to use the opportunity of the disaster happening in the Mediterranean to show the world that the Great Green Wall can be one of the solutions.”

Olesegun Obasanjo, Nigeria’s president at the time, conceived the Great Green Wall in 2005 as a band of trees across the continent.

Stretching 7,100 km from Djibouti to Dakar, this green belt would halt the spread of the Sahara desert.

Together with measures to harvest rainwater, it would allow farmers to grow crops all year round, explained Abdoulaye Wade, former president of Senegal and champion of the initiative.

“With the regeneration of biodiversity, we plan to give our planet a new ‘green lung’ and contribute thus to the fight against climatic changes,” President Wade said at a Food and Agricultural Organization conference in 2008.

In practice, the “wall” idea has evolved into a patchwork of projects, with a range of backers.

The Global Environment Facility (GEF), a multilateral development bank, supports one of the biggest programmes, providing some US$100 million of grants to 12 national projects.

It works out at around US$8m for each country, matched by around US$80 million from the World Bank and national governments.

“The main challenge has probably been to convince all partners and donors that the Great Green Wall was not a tree planting initiative,” says Jean-Marc Sinnassamy.

A sustainable land management expert at the GEF, Sinnassamy aims to develop projects to regenerate the whole landscape, tackling poverty as well as environmental degradation.

In the Maradi region of Niger, for example, he says women proudly showed him the soap and cattle feed they were able to produce.

SAWAP Field Trip to Tigray from Connect4Climate on Vimeo.

With some 60% of the continent classed as “dryland”, making arid zones productive is essential to support Africa’s growing population.

Climate change caused by greenhouse gas emissions is only increasing the strain on water resources in such regions, the Intergovernmental Panel on Climate Change warns.

Temperatures are expected to rise faster than the global average, while rainfall is likely to decrease in northern Africa.

Experts say competition for water and natural resources increase the threat of conflict.

African Union’s Tangem says there is a “very strong relationship” between desertification and conflict in the Sahel.

Young people struggle to find work and are drawn to terrorist groups like Boko Haram, he says.

“They want to have money. The next thing is: I have lost my goats, my parents have lost their heritage… I either migrate or I join the terrorist groups.”

It is another reason Tangem is keen to show well-managed drylands can support jobs. “We can engage the youth.”