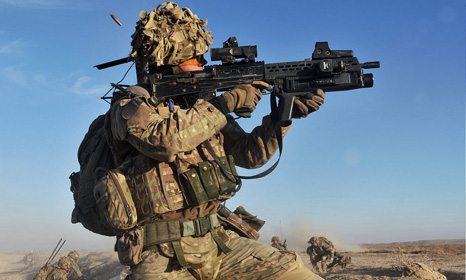 Local conflicts over water and land are being increasingly linked to civil war, genocide and sexual violence in North Africa, according to the UN.

A report released at the start of February warns that an ‘Invisible Frontline’ is emerging in the Sahel region, driven by land degradation and the effects of climate change.

Describing the problem as a “silent, invisible crisis that is destabilizing communities on a global scale”, it says farmers can either ‘fight or flee’ as previously fertile lands dry up and fail to feed livestock or yield crops.

“As the effects of climate change undermine livelihoods, inter-ethnic clashes are breaking out within and across states and fragile states are turning to militarization to control the situation,” the authors add.

They say that without proper international and local adaptation planning, the chances of enforced migration and war is likely to grow, highlighting the Sahel together with Senegal, India, Bangladesh and Afghanistan as areas at high risk.

The study contains some alarming statistics. Around 1.5 billion people are said to depend on land classed as ‘degrading’ around the world. The UN estimates 12 million hectares of productive land become barren every year, equal to 20 million tonnes of grain.

By 2020 around 60 million people could move from the infertile areas of Sub-Saharan Africa towards Europe.

And by 2025, up to 2.4 billion people globally may face periods of intense water scarcity, which could in turn see 700 million people migrate to new areas by 2030.

Hartmund Behrend, a German Army officer specialising in climate risk, told RTCC the fast degradation of soil in the Sahel region is a concern, particularly given the deteriorating security situation in that part of Africa.

Since 2010 conflicts have broken out in most countries in the region, including Chad, Nigeria, south Sudan, Algeria, Niger and Eritrea.

“I think it’s an important conflict amplifier,” Behrend said. “We see the Al Qaeda branch are more and more working in an area which is uncontrollable – we saw it in the refinery (attack) in Algeria last year.”

“Degradation should not be taken as an environmental issue but as foreign policies. This is what is heard more and more – a few weeks ago at the Munich Security Conference our Foreign Minister was only talking about climate policies,” he said.

“What do people do when they lose their land and their livelihood? Hopefully they can find alternatives which are legitimate, but it doesn’t always work like that,” he said.

“There are risks of people being involved in illicit activities like drugs, or ultimately becoming recruits for some form of terrorism.”

Morisetti points to the UK Military’s Global Strategic Trends – Out To 2040 publication as evidence of the deep concern within the security establishment.

It warns climate change could “amplify” existing political and resource stresses, pushing countries and regions to a “tipping point” where conflict ignites.

“We’ve seen in the last year conflict in the region – and contributing factors are the issues of resource stresses and scarcity – and if you look at where climate change will have its greatest effect, the Sahel is firmly in that world, that band that runs north and south around the equator,” he said.

“Therefore, this is likely to exacerbate the security challenge within and between states.”

The UN says more effective land management and disaster relief could help alleviate some of the pressures felt by communities in the region.

The authors of the ‘Invisible Frontline’ report point to Niger, where it costs between US$ 25-65 to rehabilitate a hectare of degraded land.

They argue that if some relief aid provided to the country after the 2011 drought and famine, up to 7 million hectares of land could have been restored.

“If we secure productive land, we will strengthen the livelihoods of households, promote agriculture for national growth and economic development, protect the social fabric from collapse and bolster political systems in fledgling democracies,” they write.