Ethiopia, US and Mexico among countries pledging action at Bonn meeting to cut carbon emissions and create jobs 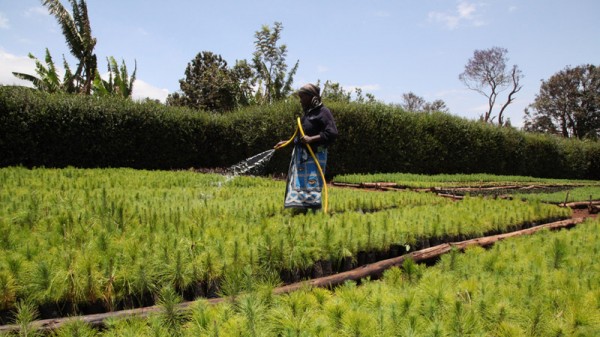 Governments have explained how they plan to restore 59 million hectares of forest worldwide in initiatives revealed in Bonn, Germany on Saturday.

Ethiopia and Liberia are collaborating in the “great green wall” to curb the spread of the Sahara. Mexico is leading restoration efforts in Latin America, while the private sector is getting involved in Southeast Asia.

The schemes, which add up to roughly the size of Kenya, meet 40% of the 2011 Bonn Challenge target to restore 150 million hectares of degraded land by 2020.

Barbara Hendricks, German environment minister, said the programme had multiple benefits: “We can do something about climate change and species extinction and help restore the livelihoods of millions of people.”

A separate analysis by the UN Food and Agriculture Organization found that deforestation has slowed down, with emissions falling 25% between 2001 and 2015 to 2.9 gigatonnes of carbon dioxide. Brazil alone drove more than half of that change.

“It is encouraging to see that net deforestation is decreasing and that some countries in all regions are showing impressive progress,” said FAO director-general Jose Graziano da Silva.

But the FAO noted forest degradation, caused by logging and fires, had increased significantly from 0.4 to 1 Gt CO2 a year.

The International Union for the Conservation of Nature (IUCN) estimates meeting the Bonn Challenge will go 11-17% towards closing what scientists call the “emissions gap”.

That is the difference between business-as-usual carbon dioxide emissions and the levels needed to avoid dangerous climate change.

Meanwhile, IUCN says meeting the Bonn Challenge will bring US$ 85 billion of economic benefits a year and US$ 6 billion in higher crop yields.

“It is not just about tree planting, it is about restoring the goods and services that forests, woodland and trees provide,” he said.

No Asian country has yet made a pledge, but Maginnis said there is “a significant bit of work with several major actors” on track to be announced by this December’s UN climate summit in Paris.

“Restoring millions of hectares of degraded land is one of the great ideas of our times,” said Andrew Steer, CEO of the World Resources Institute, a co-host of the event.

“No wonder, then, that political and financial momentum is building across every continent.”

The Bonn Challenge was last September supplemented by the New York Declaration on Forests, in which governments committed to reforest another 200 million hectares by 2030.

Some 27 national governments and 34 companies that source products from rainforest regions signed up to halve deforestation by 2020 and eliminate it by 2030.

Forests are important to not only reduce emissions but ultimately remove carbon dioxide from the atmosphere, said Norway’s climate minister Tine Sundtoft.

“Forest restoration is the most cost-effective carbon capture option we have.”