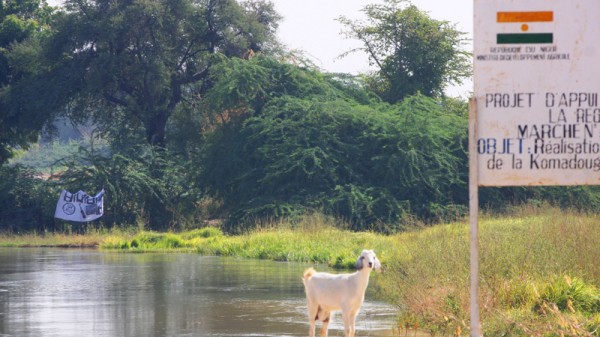 A Boko Haram flag on the riverbank between Nigeria and Niger (Pic: Flickr/European Commission DG ECHO)

As more evidence of destruction wrought by Boko Haram in northeastern Nigeria emerged on Thursday, experts highlighted the role of climate change in fomenting extremism.

Satellite images obtained by Amnesty International showed 3,700 buildings had been destroyed in the towns of Baga and Doron Baga. That reinforced estimates that up to 2,000 people had been killed in attacks by the extremist group. The Nigerian government claimed the death toll was just 150.

Meanwhile, slumping oil prices raise the threat of further instability in the country, which gets around three quarters of its revenue from oil exports.

“From outside, we can easily read it as just a religious fight, when actually it is about access to vital resources,” he said.

In much of northern Nigeria, Muslim herders are in competition with Christian farmers for dwindling water supplies.

Boko Haram’s stated goal is to create an Islamic state – although its victims have included Muslims as well as Christians.

“The so-called religious fight is a layer above those conflicts around resources,” said Gnacadja. “It is not just about Boko Haram, but in the Sahel belt you will see it is almost the same challenge in Mali and in Sudan.” 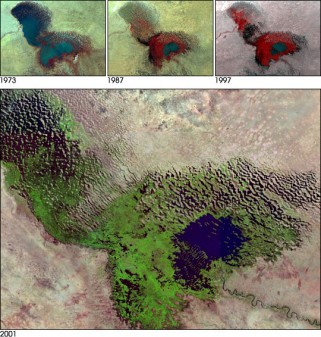 NASA images show how Lake Chad, which straddles Nigeria, Niger, Cameroon and Chad, has dried up over the past few decades.

Once among the largest lakes in Africa, the World Bank reported last year it had shrunk 90% since the 1960s.

That has been attributed to a mix of climate change and heightened demand for water in the Chad basin, which supports some 30 million people.

Local observers told RTCC this had devastated the region’s economy, making it easier for Boko Haram to recruit.

Emman Shehu, Nigerian journalist and Bring Back Our Girls campaigner, said: “Lake Chad has been an important means of survival for the people in that region.

“Over the years, for various reasons which we can generalise as climate change, Lake Chad has shrunk considerably. There is no land to farm, no fish for the fisherman, no grazing terrain for the herdsmen. Of course, there is a multiplier effect.

“That has created quite a massive pool of unemployed people, especially the youth, and it has become very easy for Boko Haram therefore to have a recruitment ground.”

Jibo Nura, head of the African Climate Change Research Centre, said the region had seen changes in the monsoon winds that usually brought rain. Combined with overgrazing and overuse of irrigation, these climatic changes had dried up the lake.

“When there’s no water to irrigate the farm, people naturally become economically and socially frustrated,” he said.

Atayi Babs, another journalist and member of the pan-African media alliance for climate change, said water stress had created “wastelands of lack, deprivation and employment”.

He added: “Men who were or would have been gainfully employed as farmers, fishermen, fish sellers and pastoralists have now been conscripted into Boko Haram with many of them participating in the deadly night raids of the terrorist group.”

A prescient article by the UN in 2012 observed tensions rising in communities around Lake Chad, as resources grew scarcer. It noted Doron Baga, one of the towns ravaged by Boko Haram, used to be lakeside but had seen the waters retreat by 20 kilometres.

Those tensions came to the world’s attention last April when Boko Haram, which translates as “Western education is forbidden”, kidnapped more than 200 schoolgirls. Despite the viral popularity of the Bring Back Our Girls campaign, nearly all are still missing. 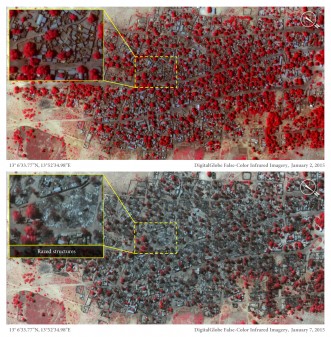 Amnesty International estimates Boko Haram killed more than 4,000 civilians in 2014. Satellite images and eyewitness testimony suggest its attacks on Baga and Doron Baga earlier this month were the largest and deadliest yet.

“They killed so many people,” a man in his fifties told Amnesty. “I saw maybe around 100 killed at that time in Baga. I ran to the bush. As we were running, they were shooting and killing.”

Médecins sans Frontières reported on 14 January that 5,000 survivors of the attack on Baga are staying in a camp in Maiduguri, the capital of Borno state. The UN refugee agency (UNHRC) reported on 9 January that some 7,300 Nigerian refugees had arrived in western Chad.

Such conflicts are not inevitable, said Gnadacja, who has founded think-tank GPS-Dev to focus on grassroots sustainability projects.

Across the border in Niger, he said communities have restored up to 5 million hectares of degraded land. So far, Boko Haram has not gained such a foothold in that area.

But for northeastern Nigeria, Boko Haram’s continued presence will make it challenging to do the same, Gnadacja warned.

“If you don’t have a minimum of security of access to the land, I don’t see how you can invest – because restoration is about investment in the land. If you want to change it, peace will be a prerequisite.”

The latest wave of violence comes as Nigeria prepares for presidential and parliamentary elections on 14 February.

President Goodluck Jonathan has been accused of a muted response to the slaughter. While he was quick to express solidarity with the 17 victims of a terrorist attacks in Paris, critics said he was slower to condemn or act on domestic terrorism.

At the same time, the falling oil price has hit government revenues, further destabilising the economy. The oil exporting country has revised its budgets twice in recent months, first to based on a forecast price of US$78 a barrel, then US$65. The price fell below US$50 this week.

This trend is “seriously impacting the resources available to Nigeria’s government at a time when it not only faces a serious security threat from Boko Haram but other potential threats around the country,” Peter Pham, director of the Africa Center at the Atlantic Council, told the International Business Times. 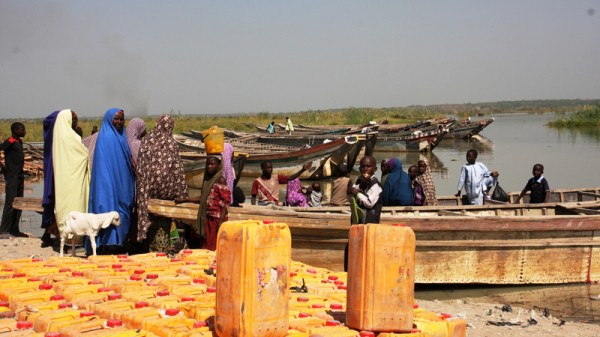 Risk analyst firm Maplecroft last October identified Nigeria as one of the countries most threatened by climate change-related violence.

“Widespread drought and food insecurity helped create the socio-economic conditions that led to the emergence of Boko Haram and the violent insurgency in the North East of the country,” it said in a report.

A number of security experts have warned that such security threats could become unmanageable if climate change continues unchecked.

UK Rear Admiral Neil Morisetti, the country’s former climate diplomacy chief, told RTCC: “A changing climate, be it as result of extreme weather or the onset of long term trends is likely to increase the stresses in central Africa, especially food and water.

“Whilst the causes of conflict are many and frequently complex it is likely that the increased stresses will exacerbate the potential threat for disruption or terrorism that comes with increased instability.”

At an event in November, Morisetti urged action on climate change to ease security threats, saying: “There is no security solution to climate change. We could probably secure a 2C world. I think it is most unlikely we could secure a 4C world.”

He was referring to the internationally agreed goal to limit global temperature rise to 2C above pre-industrial levels. African and other countries most vulnerable to climate change say that goal should be tightened to 1.5C.

Scientists at Climate Action Tracker estimate the latest carbon-cutting commitments from the US and China have reduced projected warming to 2.9-3.1C.