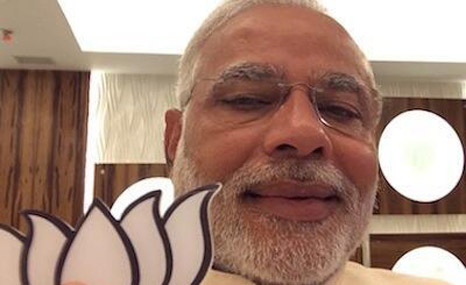 Modi is keen to portray himself as a forward-thinking PM, here taking a ‘selfie’ during the election (Pic: Narendra Modi/Twitter)

India’s new government stands accused of scrapping policies aimed at protecting the environment, two months ahead of a major UN climate summit to be hosted by Ban Ki-moon.

A series of documents outlining the relaxed rules were released by the Ministry for Environment, Forests and Climate Change, according to Delhi-based journalist Nitin Sethi.

The move opens the door for coal companies to expand exploratory work in sensitive environments, reduces the power of local tribal assemblies and lifts a ban on industries in polluted areas.

Perhaps the most eye-catching move is a plan to reduce the powers of the National Green Tribunal, an arm of the judiciary comprising legal and environmental experts.

Created in 2010, it attracted the ire of business, cancelling forest clearances and creating protected zones. Last week it extended a production limit on a Coca Cola in Varanasi due to its high water use.

Previously it has issued arrest warrants for senior police officials who ignored its rulings and placed a ban on all illegal river and ocean bed sand mining.

These actions raise serious questions over the government’s stated commitment to take the climate threat seriously, and place “sustainability at the centre of our thoughts and actions”, as outlined in the BJP election manifesto.

According to Malini Mehra, founder of the Centre for Social Markets NGO and a veteran Indian climate campaigner, this apparent bonfire of ‘green tape’ is a repeat of prime minister Narendra Modi’s time as Gujarat state governor from 2001-2014.

“There is a clear agenda and it was clear from Modi’s track record in Gujarat of prioritising unfettered business efficiency at the expense of the democratic rights of people to express what they want from development, particularly when it comes to protecting India’s natural heritage,” she tells RTCC.

Mehra says Modi’s reputation was “mythologised” in Gujarat as a result of his support for big business and the acquiescence of a friendly press.

“But the actual records of this man in office, when it comes to basic development indicators, and when you look at the starkest of them all – childhood malnutrition – have been buried.”

Despite his crushing electoral victory in May, Modi was a polarising force before he took office, largely due to allegations he mishandled riots in 2002, which left 790 Muslims and 254 Hindus dead.

But he arrived with a glowing reputation as a supporter for solar power, and won over supporters by adding the words ‘climate change’ to the end of the Ministry of Environment and Forests. 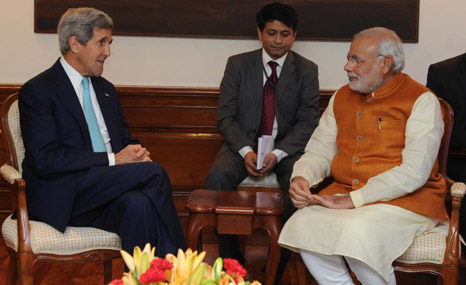 Little over two months later, and veteran climate policy observers like Lavanja Rajamani from the Centre for Policy Studies in Delhi are starting to wonder whether there was much substance behind these moves.

“I’ve found on climate change he says all these great things about solar – and some of it is borne out – but what is happening on a much quieter level are various roadblocks to environmental clearances are being removed,” she tells RTCC.

“There’s a lot of PR and propaganda.”

It’s a theme Greenpeace executive director Kumi Naidoo, a South African of Indian heritage, picked up on in a recent column for the Guardian, bemoaning the lack of environmental monitoring and compliance mechanisms.

“In its first few weeks in office, his [Modi’s] government has already made it easier for companies to clear forests for coal,” he wrote, arguing for a renewed focus on sustainable development.

There is history here too. Greenpeace is currently involved in a long-running and increasingly bitter battle with the government over land clearances for coal mining.

In the latest twist, India’s internal intelligence agency labelled Greenpeace a “threat to national economic security” and blamed the NGO for “creating obstacles” to energy plans.

What’s clear is that if the world wants to avoid dangerous levels of climate change, it needs to steer India away from a path of exclusively carbon-intensive development.

In January US president Obama said the world would end up “four foot underwater” if China and India consumed energy at the level of the USA.

The planet’s second most populous country is already its third largest source of greenhouse gases, responsible for 5% of global emissions in 2010.

The country’s energy use and emissions are projected to soar in the coming decades due to population growth and economic activity.

And what’s startling is that in many respects, India’s development has only started.

An estimated 400 million citizens still lack access to electricity and emissions per person are half that of the developed world.

The latest report from Climate Analytics, a Berlin-based NGO, puts India on course to emit between 3,254 and 5,280 megatonnes of CO2 equivalent a year by 2020, based on annual growth rates of 8-9%.

Last year scientists from the Intergovernmental Panel on Climate Change (IPCC) said that to limit warming to 2C above pre-industrial levels, no more than 1000 gigatonnes (GT) of carbon could be released.

This year it suffered a late monsoon, impacting millions of small-scale farmers, while 34 people are reported dead and 900,000 homeless after torrential rains hit the east coast, causing flooding.

A further report this year from the IPCC warned the country is likely to experience future weather extremes, such as heatwaves, drought and intense rainfall.

And perhaps more worryingly, pressure on Himalayan water resources could lead to a new conflict with China, says a report by the Global Military Advisory Council on Climate Change and Cambridge University.

But despite India boasting a wealth of scientific knowledge, notably Delhi resident and IPCC chair Rajendra Pachauri, Mehra says there appears to be ignorance at the top of government of the real risks environmental degradation poses.

“I think if the government understood India’s vulnerability and the vulnerability of our development hopes and aspirations, then it would be much more unequivocal about the need to reduce India’s own emissions, and make effective investments in adaptation,” she says.

That’s not to say Delhi has its head in the sand. The Modi government has actively engaged with international partners on climate change since taking office.

In the past month environment minister Prakash Javdekar has hosted bilateral talks with French, US and UK delegations on climate change. 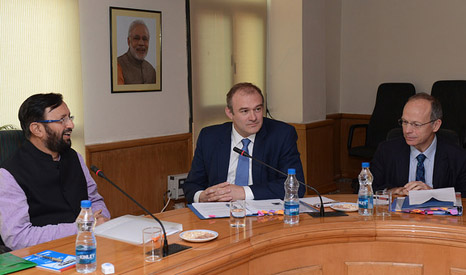 The US focus on climate – driven by secretary of state John Kerry – has had an impact in Delhi, says Rajamani.

“Thanks to Kerry and Todd Stern’s visit they have had to engage, but at the moment this is at a more detailed level like HFCs and things like that – surer ground – rather than peaking years or long term emission trajectories,” she says.

It’s less clear how this could impact at international talks on a 2015 climate deal.

The group represents 35% of global emissions – a figure that grows every year – and the four countries have it in their power to determine whether Paris will be a success.

While China has been busy implementing coal bans and discussing an emissions peak, India has cited development concerns as a means of avoiding targets.

This could change says Mehra, if China signals it’s committed to the 2015 process. Modi visited China four times as state minister of Gujarat, and sees closer ties as an economic imperative.

“This prime minister will be watchful of messaging that comes out of Beijing,” she says. “Where there is perceived to be a gap between India and China, Modi will want to be the first one to narrow it.

“If India wants it – it could position itself as a pivot point between US and China. But right now, it lacks the credibility.”

The alternative, according to former environment minister Jairam Ramesh, is that India finds itself “isolated” from China and its BASIC allies, sticking to its 20-year old script of rejecting any carbon cuts.

“India’s position in my view should be far more nuanced, far more proactive and flexible than has been the case,” he says.

Modi’s day of reckoning may come sooner than he anticipated.

The UN secretary general’s much vaunted climate meeting takes place on September 23, with three hours reserved at the start for ‘national announcements’.

“Modi has an opportunity in New York, not only to give reality to the slogan, but also to make India a leader of the 21st century,” argues Naidoo, citing Modi’s “Sabka saath, sabka vikas: development for everyone” election promise.

Obama and Chinese premier Xi Jinping will likely outline their longer term policy plans, based on concrete policies they have already explained to a domestic audience.

While China still faces a huge task to even slow its emissions, it can at least point to its huge investment in renewables, seven pilot carbon trading schemes and plans to slash potent f-gases.

UN expectations are for serious contributions that can help bolster political will before Paris. Few will be fooled if Modi stands on the podium and simply repeats his “saffron revolution” line.

For Mehra, the summit offers a chance for India to regain its “self-belief” and start acting again like the aspiring superpower it is.

“I think it has come as a real gift for us, and the BKM summit will be the first major international outing,” she says.

“Typically heads of state would go to the general assembly, but this is bigger than that, and all of the issues that he picked internationally… Ukraine, Gaza, he’s chosen not to make a soft power play on any of those issues.

“The question is – is he going to make a soft power play on climate change? And he could very well do so. This is where we have to raise expectations.”