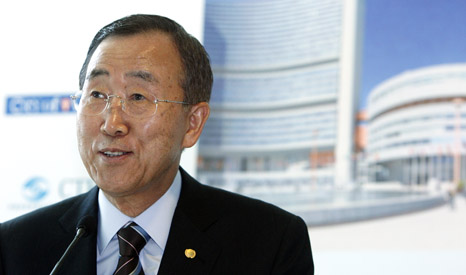 Heads of state speeches are set to take up half of Ban Ki-moon’s climate summit on September 23, with the remaining time focused on finance, cities, farming and energy.

A scenario document issued by Ban’s office reveals around 200 leaders will make simultaneous announcements in three separate rooms from 1015-1315 on the day.

The Secretary General wants governments to come armed with deliverable climate initiatives, either in the form of financial sweeteners or examples of domestic carbon cutting action.

This will be followed by a ‘Private Sector Forum’ lunch lasting 1 hour 45 minutes, where business leaders will discuss climate initiatives with government officials.

The packed schedule highlights the immense challenge the UN faces in cramming in various themes and sectors into one day of talks.

The planned 1530 to 1830 session involves discussions spread over five rooms, with forests, agriculture, transport and cities each allocated 40 minutes.

Government and private sector bankers will have 90 minutes to discuss finance in the afternoon, a session that will perhaps benefit if leaders offer some cash in the morning session.

A separate ‘thematic discussions’ bloc will offer ‘voices from the frontlines’ a chance to tell their stories, together with a focus on the economic and health benefits of climate action.

Some civil society and youth groups may be disappointed to see no dedicated section to voice their specific concerns, although they will be integrated into other areas of discussions.

Around a million climate campaigners are expected to march through New York on September 21, converging on Times Square. A similar event is set to take place in London.

Ban’s meeting has been kept deliberately separate from the UN’s official climate change negotiations, which will gather for its major summit in Lima this December.

A list of attending heads of state has not yet been published, but RTCC understands US president Barack Obama and Chinese premier Xi Jinping will both attend.

According to the summit website, there is not expected to be any grand outcome, but the secretary general will summarise what has been announced at the end.

UN officials have previously told RTCC the aim is to “build political momentum” behind a climate deal, rather than try and settle the more contentious issues over one day.