Obama: China and India carbon emissions could leave US “underwater” 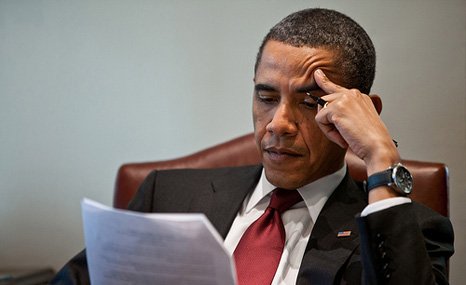 Barack Obama has warned that “we’ll be four feet underwater” if China and India end up consuming energy like the USA.

The US President’s remarks, made at a Democrat fundraiser in Seattle, reflect concerns that the world’s top emerging economies hold the key to preventing dangerous levels of climate change.

Scientists say that if greenhouse gas emissions continue to soar, warming temperatures around the world could lead to melting ice-caps at the north and south poles, resulting in sea levels rising 26-82cm by 2100.

Despite its relatively late industrialisation, China’s emission levels have rapidly caught up with the rest of the world. It’s now second in the all-time carbon pollution list behind the USA.

Fellow developing giants Brazil, Indonesia and India also make the top 10, which includes the UK, France and Germany. Last year the US and China signed a pact to cooperate on cutting harmful emissions from power plants and vehicles, but it is unlikely this will have any immediate effects.

The New Yorker’s David Remnick, who was given access to Obama in late 2013, reports the President is sympathetic to the desire of China and India to lift millions out of poverty, but keen to stress the urgency of climate action to his supporters.

The Chinese government is under severe pressure from its own citizens due to regular toxic smogs that blanket major cities as a result of power generation and exhaust fumes. Some reports from Beijing suggested authorities had erected a giant TV screen so residents starved of natural daylight could watch the sun rising and setting.

A UN science report due in March is likely to blame much of China and India’s emissions on Western nations ‘outsourcing’ carbon pollution. Levels of carbon dioxide grew twice as fast between 2000-2010 as they did in the previous thirty years.

According to the the Guardian the Intergovernmental Panel on Climate Change (IPCC) says: “A growing share of CO2 emissions from fossil fuel combustion in developing countries is released in the production of goods and services exported, notably from upper-middle-income countries to high-income countries.”

Per capita analysis also reveals a huge discrepancy between energy use in the USA and developing parts of the world. According to the World Bank, in 2011 the average US citizen consumed the equivalent of 7,032 kilogrammes of oil a year, compared to 2,029 per person in China.

This highlights the challenge for UN envoys working on plans for a global climate change set to be signed next year. Developing countries will want flexibility to maintain economic growth, while richer nations will not willingly cut their energy usage.

Domestically, the Obama Administration is currently stuck in a bitter row over its attempts to curb carbon pollution from coal-fired power plants. Republicans say it is a ‘war on coal’ aimed at breaking US industrial heartlands.

Last week Senate Minority Leader Mitch McConnell launched a new attempt to block the legislation in Congress. In another sign of the battle to come, House Republicans recently appointed David Schweikert, a high-profile climate sceptic from Arizona to the House Science Committee.

Green groups say the White House’s ‘all of the above’ energy strategy, which encourages investment in renewables, shale gas, oil and biofuels will lock the country into a carbon intensive system for decades.

A letter from leading NGOs said the policy “accelerates development of fuel sources that can negate the important progress you’ve already made on lowering U.S. carbon pollution, and it undermines U.S. credibility in the international community”.

They hope the President will announce new ambitious measures in next week’s State of the Union speech, where he will set out his priorities for 2014.