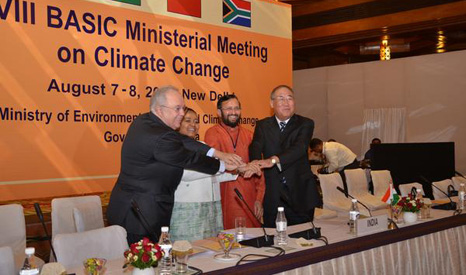 Environment ministers from Brazil, South Africa, India and China called on developed countries to meet their commitments on emissions cuts and green finance.

At a meeting in New Delhi, the so-called BASIC countries highlighted “extensive and ambitious” voluntary actions they were taking to cut their own greenhouse gas emissions.

Prakash Javadekar, India’s environment minister, said: “We are at a very critical stage in our effort to combat climate change.

“While science prompts towards greater action, we find that response of countries is not adequate. We must incentivise action. The first step in this regard is enhanced action by developing countries.”

We had informal & meaningful discussion during Interval at #18thBASIC Ministerial Meeting on Climate Change. pic.twitter.com/ZbzoCYJO94

Climate negotiators are working towards a global treaty in Paris next year.

Parties are expected to reveal by March 2015 the contributions they are prepared to make towards global efforts.

In a statement released on Friday, the ministers said all parties should publish these plans as soon as possible.

The ministers showed reluctance to make firm commitments to curb climate pollution until the developed countries play their part, however.

Analysis: Will Modi be a climate champion?

While developing countries should “show political will,” South Africa’s environment minister Edna Molewa, said: “We do expect that the developed countries should once again provide a lead.”

Crucially, developed countries must “honour their obligations” on providing finance for poorer nations to act on climate change.

The BASIC group expressed disappointment over a “continued lack of any clear roadmap for providing US$100 billion a year by developed countries by 2020”.

In particular, it demanded “immediate and substantial capitalisation” of the Green Climate Fund, which is seeking to raise US$15 billion by the end of the year.

Germany has made the biggest pledge to date, of US$1 billion. France, Norway and the UK have promised to support the fund but provided no figures.