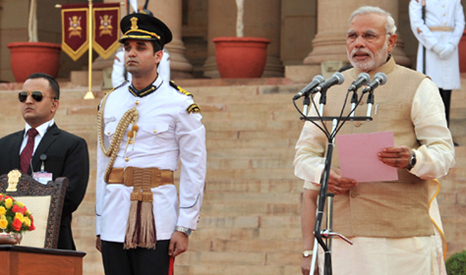 India Prime Minister Narendra Modi wants to boost the country’s solar industry in a bid to drive the economy and cut the number of blackouts.

Today’s Presidential Address outlining the new government’s plans emphasised that growth and containing food prices are priorities, together with water use and energy.

“The government will come out with a comprehensive National Energy Policy and focus on development of energy related infrastructure, human resource and technology,” said President Pranab Mukherjee.

“It will expand the national solar mission and connect households and industries with gas-grids.”

The government will also seek to reform the coal sector – which currently provides the country with 68% of its electricity.

ANALYSIS: Will Modi be a climate change champion?

Despite heavy support in the election campaign from oil and gas companies, Modi seems keen to stress his desire to boost the country’s renewable energy capacity.

As chief minister of Gujarat between 2001-2014 he pioneered the first incentives for large scale solar power, opening a 600MW solar park and leaving the state with a renewables share of 17%.

Speaking on Sunday, he said the energy industry needed to radically change if it is to provide for the country’s fast-growing 1.2 billion population.

“We need a saffron revolution that focuses on renewable energy sources such as solar energy, to meet India’s growing energy demand,” he said.

“I know when I say saffron, people here become alert. But saffron is a symbol of energy,” adding: “If we have to generate employment and change for the better, we plan to build 100 smart cities.”

Huge problems face the new Prime Minister. An estimated 400 million still lack access to electricity, while blackouts are still common across the country.

According to the US Energy Information Agency, primary energy consumption has more than doubled between 1990 and 2011, with a heavy reliance on imported coal and oil.

A government report released at the end of May put the costs of investing in low carbon energy systems at $834 billion up to 2030, stressing the need for India to start addressing its emissions.

To add to the difficulties, India’s 29 states and seven union territories wield varying degrees of power, limiting the executive authority of any government in Delhi.

According to RL Rao, head of India’s central electricity regulator from 1998-2001, the current model of power generation is broken, with inefficient utilities and fuel subsidies skewing the market.

The previous government had planned a $31 billion bailout of some utilities, where cashflow problems mean they cannot offer a steady supply of electricity.

“We are in one of the most unimaginably complicated crisis entirely created by central government and state government,” he said, adding that extra cash will not solve deeper problems.

“If Mr Modi is going to cut this rubbish, he is going to have to knock a lot of heads in state and central government. If anyone can do it he can, because he’s a tough guy.”

Rao thinks nuclear power has the potential to displace coal in the energy mix, but fears plans for more reactors will get caught up in the country’s legendary bureaucracy, hostile to foreign investment.

“We have a lot of potential for solar and wind, particularly in parts of Rajasthan, Gujarat and Karnataka,” he said.

“But our solar panels are largely imported, and the Chinese are dumping panels into India. What Modi needs to do is get into the equipment for the panels and cells.”