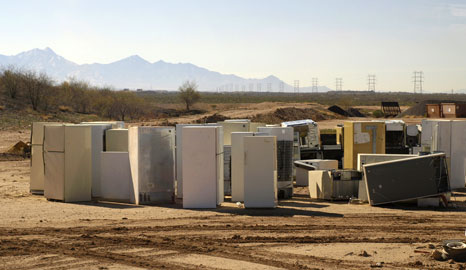 China said it will slash emissions of a highly potent greenhouse gas that is used in fridges and airconditioners, a move that could deliver huge benefits to the climate, green groups say.

Last month, the Chinese government said it would cut emissions from production of hydrofluorocarbons (HFCs) by 280 million tonnes of carbon dioxide equivalent – similar to the annual carbon footprint of Spain  – as the country implements an agreement to curb the use of the chemicals.

A Chinese language copy of the government’s ‘2014-2015 energy saving low-carbon development action plan’ dated May 28, includes an intention to accelerate the destruction of HFCs and pursue alternatives used in refrigeration and airconditioning, demand for which has soared.

“This sends a strong signal to HFC producers and consumers around the world to speed up their efforts to get out of HFCs and into climate friendly alternatives,” said Durwood Zaelke of the US-based Institute for Governance & Sustainable Development, which monitors efforts to phase out the climate-changing chemicals.

Natasha Hurley, a campaigner with the Environmental Investigation Agency, said the Chinese announcement appeared to be the first major step in phasing out the gases.

“There doesn’t appear to be too much information about longer term targets on cutting emissions from HFCs, but I’d expect the reductions to be deeper over time,” she said.

Campaigners say a fast phasedown of HFCs by 2020 under the 1987 Montreal Protocol would prevent up to 200 billion tonnes of CO2e being pumped into the atmosphere by mid-century, and  avoid up to 0.5C of warming by 2100.

Without action to curb HFCs, by 2050, emissions from the gases could be equivalent to 12% of annual CO2 emissions under a business-as-usual scenario, and up to 75% of annual greenhouse gas emissions if countries make big cuts to energy-related CO2.

This would wipe out the benefit of costly action to cut emissions from power generation and transport, IGSD says.

China’s target to cut CO2 emissions from the HFC production follows a deal signed between President Obama and President Xi Jinping last year, including a formal agreement to use the Montreal Protocol, rather than the Kyoto Protocol, to cut the production and use of the chemicals.

At the G7 summit in Brussels on Thursday, leaders reiterated their support to global efforts to cut emissions from HFCs.

US conglomerate Honeywell has set up joint ventures with Chinese chemical companies to produce ‘Hydrofluoroolefins’ or HFOs, a type of HFCs that have a much lower potential to warm the earth.

China’s chemicals industry – the world’s biggest producer of HFCs – has for the past decade lobbied against curbs being agreed under the Montreal Protocol, and made fat profits from destroying the gases through the Kyoto Protocol’s international carbon market.

Meanwhile, appliance manufacturers that benefitted from booming demand in developing countries also fought to retain the use of HFCs, which has for decades have often been cheaper and more readily available than alternatives.

But in recent years Chinese policymakers have acknowledged that cuts in emissions from HFCs is a relatively cheap way of shrinking the country’s carbon footprint, allowing reductions to be converted into carbon offsets that can be used in domestic cap-and-trade schemes.

Yet green groups warn that HFOs generate toxic by-products, urging manufacturers of fridges and airconditioning units to use ‘natural’ refrigerant chemicals instead, such as ammonia.

In addition to curbing the production HFCs by chemical companies, campaigners want countries to compel the safe removal and destruction of the compounds from old or discarded fridges and airconditioners, which could avoid 40-60 billion tonnes of CO2e by mid-century, according to US academics.