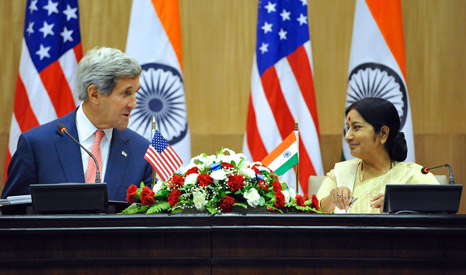 US officials have pressed India to take a greater burden of emission reductions under a potential new UN climate agreement, according to reports.

Secretary of State John Kerry and his lead climate official Todd Stern have been in intense discussions with environment minister Prakash Javadekar in Delhi this week.

The Business Standard news agency says US officials urged India to accept responsibility for greenhouse gas cuts, despite its position as a developing country.

“Javadekar and his team expressed their reservations on the issue, pointing to the fact that developed countries were required to show leadership under the convention and India was against breaking the existing embedded differentiation between rich and developing countries,” it says.

“Javadekar also insisted that the principle of equity needed to be adhered to while distributing the burden of reducing emissions globally.”

Developed and emerging economies are expected to reveal their contributions to a global carbon cutting deal by March 2015. India’s emissions rose 7% in 2013, the third highest after China and the US.

Historically India has resisted making any such commitment, citing huge levels of poverty within its borders, and the need to supply electricity to an estimated 400 million people without power. 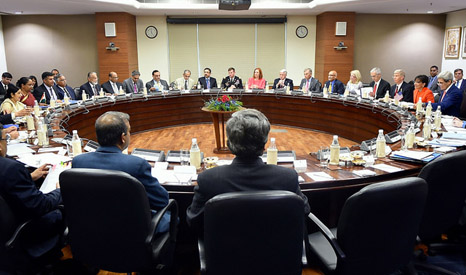 The US-India meeting, labelled the Fifth Strategic Dialogue, does appear to have made headway on clean energy technologies, as well as efforts to cut the production of super-polluting HFC gases.

The countries appear ready to cooperate on urban energy efficiency schemes, together with the deployment of other clean energy technologies.

The Standard quotes sources confirming the US and India will engage in “structured bilateral discussions” over the HFC gases.

Previously India has blocked efforts to regulate these under the Montreal Protocol, a treaty originally set up to curb ozone-killing gases.

It says the Protocol does not take into account the needs and capacities of developing part of the world.

Speaking at a press conference, Kerry said: “We want to help India to be able to meet this challenge, to make the connections, and to be able to help supply clean electricity to the 400 million Indians who today live without power.

“I know this is a priority for the prime minister, and it’s a priority that we’re prepared to try to share.”

Narendra Modi had “stated clearly that he understands the urgency of this issue”, Kerry added.

Separately, in what could be an unfortunate portent of future UN climate talks, India has blocked World Trade Organisation efforts to standardise customs rules, a move which would have been the first global trade reform in twenty years.

Citing high levels of poverty, India had asked for more flexibility to stockpile and subsidize basic foodstuffs, which runs against current WTO regulations.

Experts say this is a worrying sign for multilateral talks, and could lead to smaller coalitions making agreements to ease trading restrictions.

Asked about the issue in the press conference, Kerry said a compromise that would be in the best interests of India was still possible.

“Our feeling is obviously that the agreement that was reached in Bali is an agreement that importantly can provide for food security for India,” he said.

“We do not dismiss the concerns India has about large numbers of poor people who require some sort of food assurance and subsistence level, but we believe there’s a way to provide for that that keeps faith with the WTO Bali agreement.”