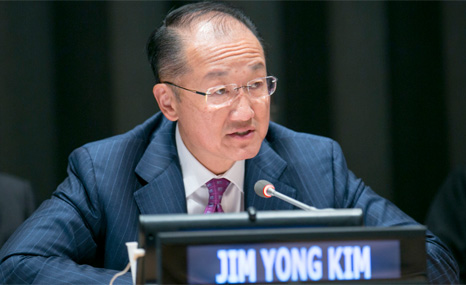 The head of one of the world’s most powerful financial institutions says governments and business should consider withdrawing funding from oil, gas and coal companies.

“Through policy reforms, we can divest and tax that which we don’t want, the carbon that threatens development gains over the last 20 years,” World Bank President Jim Yong Kim said in an address at the World Economic Forum summit in Davos, Switzerland.

Jim added financial regulators should set this agenda by forcing companies to reveal their exposure to climate-related impacts. He said: “The so-called “long-term investors” must recognize their fiduciary responsibility to future pension holders who will be affected by decisions made today. Corporate leaders should not wait to act until market signals are right and national investment policies are in place.”

World Bank Group vice president and special envoy for climate change Rachel Kyte described his call as “prudent”. It is believed to be the first time he has publically backed moves to cut investments in industries responsible for releasing large quantities of climate warming gases into the atmosphere.

The remarks are significant and a sign the institution is “ratcheting up its position”, according to Craig Mackenzie, Head of Sustainability at Lloyds Banking Group.

He told RTCC: “The World Bank is one of the top five financial institutions, so for its leader to call for divestment and challenge the pension funds to think more widely about fiduciary duty and come up with another $30 billion of green bonds in the next 12 months…I’m not aware of that happening before from the head of the World Bank.”

Jim Kim call to double size of green bond market to $20bn by Sept leaders summit well received by financial leaders at #WEF14 Can be done.

Under Jim’s tenure as President, the bank has steadily reduced its level of support for fossil fuel power stations in developing countries, announcing last year it would not back any new coal-fired energy plants “except in rare circumstances.”

Momentum and research into divestment from the fossil fuel sector has gathered pace in the past year. Greenpeace has warned of 14 ‘carbon bombs’ that could tip global warming off the scale if planned drilling and mining goes ahead.

HSBC says coal assets in Australia could see their value halved in the next 24 months, while the Carbon Tracker Initiative says $674 billion annual investments in oil, coal and gas are at risk because they cannot be used if governments agree an emissions reduction deal at a UN summit scheduled for December 2015.

James Leaton, head of research at Carbon Tracker, told RTCC Jim’s remarks demonstrate the need for investors and regulators to work harder at identifying the implications of tackling climate change, and review their long-term capital expenditure.

“Divestment can occur at several levels – investors avoiding high cost, high carbon activities (eg coal or tarsands), or fund managers adjusting the weightings in their portfolios, or companies cancelling capital expenditure or selling off assets,” he said. “All of these are responses that reflect the direction of travel needed to deliver a low carbon energy system.”

Jim’s statement is the latest in a series of warnings from senior intergovernmental and UN figures about the need to focus on climate change. Last week UN Secretary General Ban Ki-moon called on governments to deliver their plans to reduce climate-warming gases to him by September, ahead of a world leaders’ climate summit he has planned in New York.

Two weeks ago UN climate chief Christiana Figueres told a meeting of leading investors they could be breaking the law if they fail to embed climate risk analysis in their long term planning.