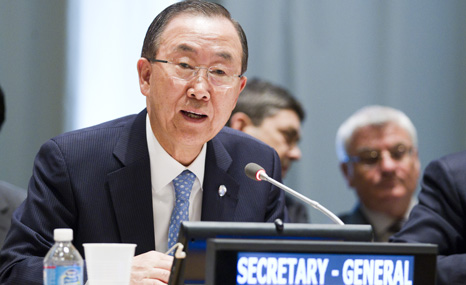 This year’s World Economic Forum in Davos should be the launching ground for a campaign to develop a lasting solution to climate change, the UN Secretary General Ban Ki-moon said on Thursday.

Praising the European Union’s “ambition” for making a pledge to cut emissions 40% by 2030, Ban added he wanted other leading economies to come forward and make similar commitments by the time the UN’s annual climate summit opens in Lima.

“By the time of Peru we need to have a concrete draft document so members will negotiate on the basis of this document, which we hope will be adopted in Paris,” he said.

The annual gathering of world leaders, chief executives and influential investors in the Swiss resort is often seen as a barometer of the global economy, where bankers and economists discuss the risks and opportunities for the coming few years.

Compared to previous years, the issue has crept up the 2014 agenda, and dominated a report released to coincide with the summit, rating extreme weather events in its ‘Top 10’ of challenges over the next decade.

On Wednesday entrepreneurs Sir Richard Branson and Arianna Huffington dominated the headlines, releasing proposals for a ‘Plan B for business’, encouraging delegates to think beyond simple profit. “We’ve made pledges to get our own houses in order, and now we’ll go out to other businesses to see if they will sign the pledge,” Branson said.

On Thursday the focus turned to climate change, and a proposed global plan to keep warming below 2C, scheduled to be signed off in Paris next year. The EU’s release of its 2030 goals has offered added resonance, offering the billionaire investors crowding the conference rooms (and bars) a sense of what ‘climate ambition’ looks like.

The Union’s White Paper has been heavily criticised by green groups and some low carbon investors since its release yesterday, many accusing the 28-strong team of Commissioners of offering a weak set of measures.

That’s not a view shared by European Commission President Juan Manuel Barroso, also in Davos and keen to focus on how climate targets can enhance economic growth.

Speaking at a press conference he strongly rejected claims the 40% target was unambitious, adding that a resurgent world economy meant nations could devote more attention to cutting emissions. “I hope our global partners will be with us in an equally determined and ambitious manner… in the interest of everyone,” he said.

Other leading lights in Davos appear to see the EU’s role as a climate pioneer less important. World Bank President Jim Yong Kim, who has tightened his organisation’s rules on coal funding in the past year, called on world leaders to agree on implementing a carbon price by September. “This is the year to take action on climate change, no more excuses … we need leaders who are not thinking about short term election cycles.”

Jim said leading fund managers should commit to buying a certain level of green bonds on an annual basis, suggesting “$20billion by September and $50 billion by the Paris meeting [2015]” would be suitable targets.

Stern, also in Davos, told the Guardian yesterday he would have been “much fiercer” in his 2006 analysis of the risks of global warming, admitting that emissions and their effects on glaciers and polar ice caps had been faster than he anticipated.

Warning that temperatures post 2100 could be 4-5C higher in the next century he said: “The last time we had a change in global temperatures of this order of magnitude it was in the other direction. It was called the Ice Age.”